A circuit-switched network consists of a set of switches connected by physical links. A connection between two stations is a dedicated path made of one or more links.

A circuit-switched network consists of a set of switches connected by physical links. A connection between two stations is a dedicated path made of one or more links. However, each connection uses only one dedicated channel on each link. Each link is normally divided into n channels by using FDM or TDM.

A circuit-switched network is made of a set of switches connected by physical links, in which each link is divided into n channels. 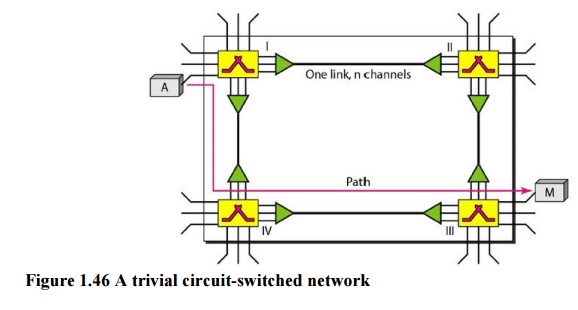 The end systems, such as computers or telephones, are directly connected to a switch. We have shown only two end systems for simplicity. When end system A needs to communicate with end system M, system A needs to request a connection to M that must be accepted by all switches as well as by M itself. This is called the setup phase; a circuit (channel) is reserved on each link, and the combination of circuits or channels defines the dedicated path. After the dedicated path made of connected circuits (channels) is established, data transfer can take place. After all data have been transferred, the circuits are tom down.

·           Before starting communication, the stations must make a reservation for the resources to be used during the communication. These resources, such as channels (bandwidth in FDM and time slots in TDM), switch buffers, switch processing time, and switch input/output ports, must remain dedicated during the entire duration of data transfer until the teardown phase.

·           Data transferred between the two stations are not packetized (physical layer transfer of the signal). The data are a continuous flow sent by the source station and received by the destination station, although there may be periods of silence.

·           There is no addressing involved during data transfer. The switches route the data based on their occupied band (FDM) or time slot (TDM). Of course, there is end-to-end addressing used during the setup phase.

In circuit switching, the resources need to be reserved during the setup phase; the resources remain dedicated for the entire duration of data transfer until the teardown phase.

As a trivial example, let us use a circuit-switched network to connect eight telephones in a small area. Communication is through 4-kHz voice channels. We assume that each link uses FDM to connect a maximum of two voice channels. The bandwidth of each link is then 8 kHz. Telephone 1 is connected to telephone 7; 2 to 5; 3 to 8; and 4 to 6. Of course the situation may change when new connections are made. The switch controls the connections

The telephone companies have previously chosen the circuit switched approach to switching in the physical layer; today the tendency is moving toward other switching techniques. For example, the telephone number is used as the global address, and a signaling system (called SS7) is used for the setup and teardown phases.

Switching at the physical layer in the traditional telephone network uses the circuit-switching approach.