Data communications are the exchange of data between two devices via some form oftransmission medium such as a wire cable.

Data communications are the exchange of data between two devices via some form oftransmission medium such as a wire cable.

The effectiveness of a data communications system depends on four fundamental characteristics:

The system must deliver data to the correct destination. Data must be received by the

The system must deliver data accurately.

The system must deliver data in a timely manner. In the case of video and audio, timely delivery means delivering the data as they are produced. In the same order, that they are produced, and without significant delay. This kind of delivery is called real-time transmission.

Jitter refers to the variation in the packet arrival time. It is the uneven delay in the delivery of audio or video packet.

The message is the information to be communicated. Popular forms of information include text, numbers, pictures audio and video.

The sender is the device that sends the data message. It can be a computer, workstation, telephone handset, video camera, and so on.

The receiver is the device that receives the message. It can be a computer, workstation, telephone handset, television and so on.

The transmission medium is the physical path by which a message travels from sender to receiver. Ex. Twisted pair wire, coaxial cable, fiber optic cable and radio waves.

A  protocol  is  the  set  of  rules  that  governs  data  communications.  It  represents  an agreement between the communicating devices.

Text is represented as a bit pattern, a sequence of bits (Os or 1s). Different sets of bit patterns have been designed to represent text symbols. Each set is called a code, and the process of representing symbols is called coding.

Numbers are also represented by bit patterns. The number is directly converted to a binary number to simplify mathematical operations.

Images are also represented by bit patterns. An image is composed of a matrix of pixels (picture elements), where each pixel is a small dot. The size of the pixel depends on the resolution.

Audio refers to the recording or broadcasting of sound or music. It is continuous, not discrete.

Video refers to the recording or broadcasting of a picture or movie. Video can either be produced as a continuous entity (e.g., by a TV camera), or it can be a combination of images, each a discrete entity, arranged to convey the idea of motion.

Communication between two devices can be simplex, half-duplex, or full-duplex. 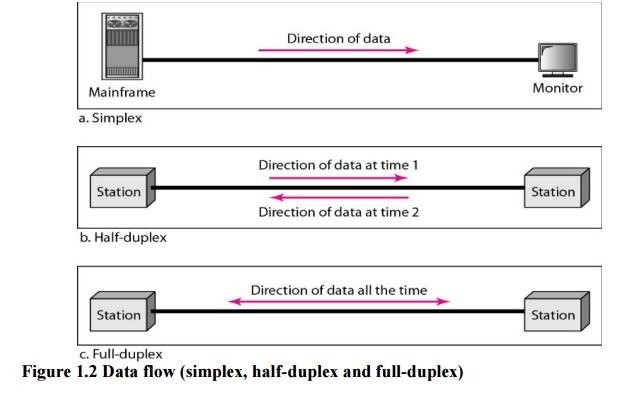 In simplex mode, the communication is unidirectional, as on a one-way street. Only one of the two devices on a link can transmit; the other can only receive (see Figure 1.2a). Keyboards and traditional monitors are examples of simplex devices.

In half-duplex mode, each station can both transmit and receive, but not at the same time. When one device is sending, the other can only receive, and vice versa (see Figure 1.2b). Walkie-talkies and CB (citizens band) radios are both half-duplex systems.

In full-duplex mode (also called duplex), both stations can transmit and receive simultaneously (see Figure 1.2c). One common example of full-duplex communication is the telephone network.