The various types of concrete sleepers (prestressed, pre-tension, post-tension, and two-block) being manufactured by Indian Railways.

The various types of concrete sleepers (prestressed, pre-tension, post-tension, and two-block) being manufactured by Indian Railways have been described in Table 7.6.

The mono-block prestressed concrete sleeper (Fig. 7.11), which is similar to the German B-58 type of sleeper, has an overall length of 2750 mm and a weight of 270 kg approximately. The sleeper has a trapezoidal cross section with a width of 154 mm at the top and 250 mm at the bottom and a height of 210 mm at the rail seat. A cant of 1 in 20 is provided on the top surface of the sleeper for a distance of 175 mm on either side of the centre line of the rail to cover the area of rail fittings. The sleeper is prestressed with 18 high tensile steel (HTS) strands of 3 × 3 mm diameter and 12 6-mm-diameter mild steel links. The initial prestressing of the steel is 100 kg/cm2. The 28-day crushing strength of the concrete is normally not less than 525 kg/cm2.

The rail rests on a grooved 130 × 130 mm rubber pad, with the grooves lying parallel to the axis of the rail. The fastenings provided for the 52-kg rail are Pandrol clips, which are held in malleable cast iron inserts as shown in Fig. 7.12. 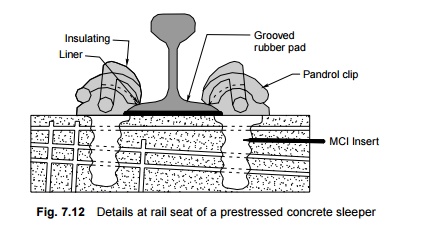 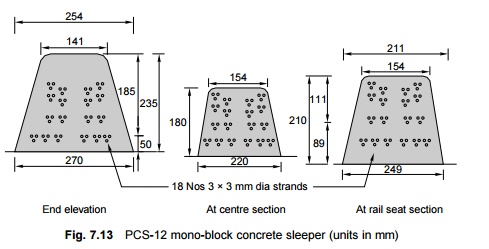 The important dimensions of both of these types of sleepers are shown in Fig. 7.13 and listed as follows.

The use of concrete sleepers using the post-tension method has not been successful on Indian Railways and its manufacture has since been stopped.

A design for mono-block PRC sleepers (PCS-17) has recently been standardized for MG. The sleeper has a trapezoidal cross section similar to that of a BG sleeper. The concrete should have a 28-day compressive strength of 525 kg/cm2. The salient features of this sleeper are the following (Fig. 7.14). 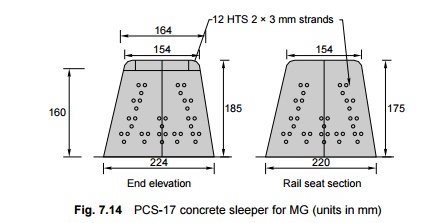 PRC sleepers can be used for 90 R rails with elastic rail clips and glass filled nylon liners (GFN 66) and on sole plates.

A design for a two-block RCC sleeper for BG yards has been standardized by RDSO as per drawing number RDSO/T-2521 for extensive trials on Indian Railways. There is a general scarcity of wooden and CST-9 sleepers for use in BG yards and the new RCC sleepers will ease the situation in a big way. Some of the salient features of this sleeper are as follows.

l    Considering low speeds in yard lines and less impact effect, the rail seat design load has been taken only as 10 t without any lateral thrust.

l    Main reinforcement in each block

Two-block concrete sleepers for use in MG yards have recently been developed. The sleeper consists of two cement concrete blocks, each weighting about 36 kg and consisting of an MS reinforcement of about 7 kg. The two RCC sleeper blocks are connected by an angle tie bar of 55 × 50 × 6 mm section and 1.5 m length. The rail is fixed to the sleeper block either by a clip and bolt arrangement or by polythene dowels and rail screws. A pad is provided below the rail seat to provide cushioning.

There are relative advantages and disadvantages of mono-block and two-block concrete sleepers. Some of these are enumerated below.

(a)  Mono-block sleepers give better longitudinal and lateral stability to the track compared to two-block concrete sleepers.

(d) In a mono-block prestressed concrete sleeper, a crack that develops because of overstressing is likely to close down upon return to normal condition, whereas in a two-block sleeper, such a crack will continue to remain open.

(f)  During derailments and rough handling the tie bars of two-block sleeper get deformed, thereby affecting the gauge.

(g)  In a two-block sleeper, the two blocks are not likely to rest on the ballast in a way that each rail is properly inclined to the vertical, a feature which could affect the alignment and gauge of the track.