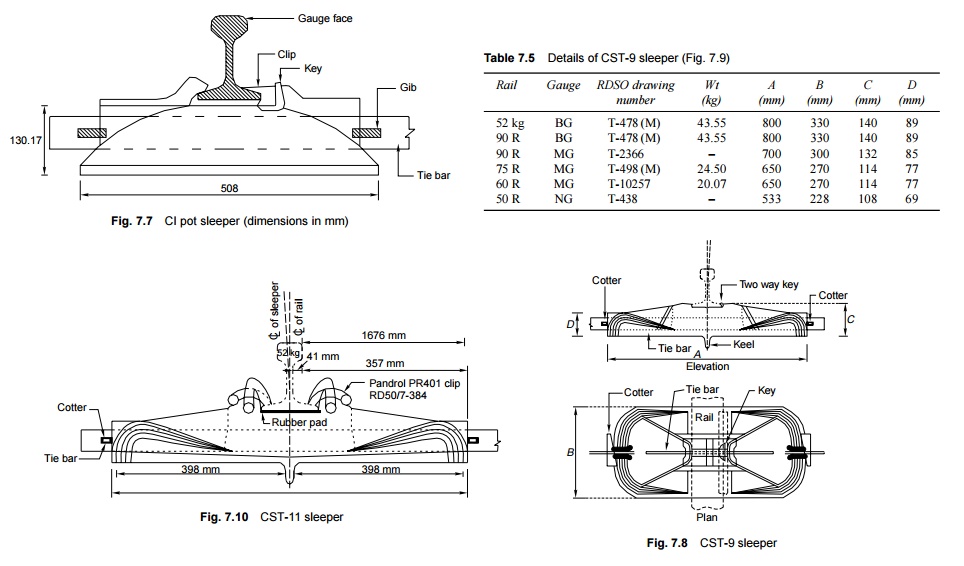 Cast iron sleepers are being extensively used on Indian Railways and about 45% of the track at present consists of CI sleepers, which may be either pot type or plate type.

(b) Less probability of cracking at rail seat

(a)  Gauge maintenance is difficult as tie bars get bent

Cast iron pot sleepers (Fig. 7.7) consist of two hollow bowls or pots of circular or elliptical shape placed inverted on the ballast section. The two pots are connected by a tie bar with the help of cotters and gibs; the gauge can be adjusted slightly [± 3 mm (1/8")] by changing their positions. The rail is placed on top of the pots in a rail seat provided with a cant of 1 in 20 and is held in position with the help of a key. The pot sleeper suffers from the drawback that it cannot be used on curves sharper than 4 o on BG. Most of the fittings are hidden and their inspection and maintenance is quite difficult. These sleepers have become obsolete now and are not being procured by the Indian Railways any more. 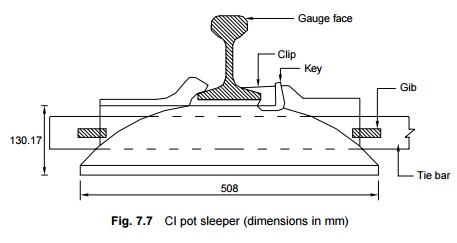 The CST-9 sleeper is a standard sleeper and is being most extensively used on Indian Railways (IR). It is called CST-9 (Central Standard Trial-9) (Fig. 7.8) because it is the ninth of the series produced by the Central Standard Office. The sleeper is a combination of pot, plate, and box sleepers. It consists of two triangular inverted pots on either side of the rail seat, a central plate with a projected keel, and a box on top of the plate. The two CI plates are connected by a tie bar with the help of four cotters. The rails are held to the sleeper by two-way keys provided at each rail seat on the side of the gauge face. The gauge is adjusted to a value of ± 5 mm by altering the relative positions of the four cotters. 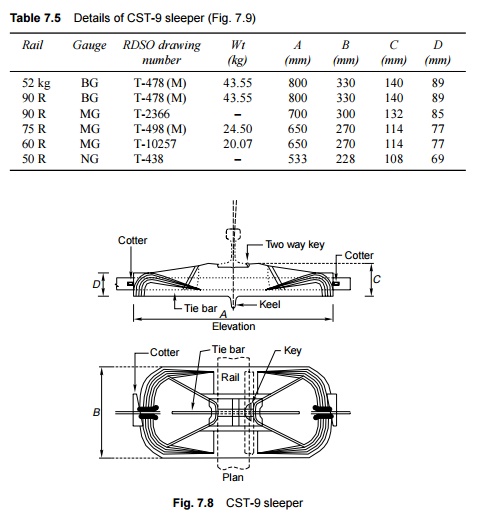 The rail seat of a CST-9 sleeper is 115 mm wide along the length, and this narrow bearing tends to reduce the rocking of the sleeper under the wave motion of the rail. The sleeper is designed to provide a firm support to the rail and provides fairly good lateral and longitudinal stability to the rails. The dimensions of CST sleepers in use on IR are given in Table 7.5. The sleeper provides a bearing area approximately equal to the effective bearing area of a standard BG wooden sleeper, i.e., 5 sq. ft, for both the plates. CST-9 plates are also available with reverse jaws (T-443 type) to serve as an anti-sabotage measure; a few of these are provided in each rail length. Normally, three reverse jaw CST-9 sleepers are provided per rail to serve anti-sabotage purposes. The weight of a CST-9 sleeper assembly along with fastenings for BG is 102 kg and for MG is 58 kg.

The CST-9 sleeper is one of the most popular sleepers on Indian Railways at present. The sleeper has, however, certain limitations when combined with the modern track as mentioned in the following.

(a)  As the sleeper does not have a flat bottom, it is not quite suitable for MSP and mechanical maintenance with tie tamers.

(b) The suitability of a CST-9 sleeper on LWRs, particularly on the breathing lengths, is doubtful because of rigid fastenings and the inability of the fastenings to hold the rail with a constant toe load.

(c)  The rail seat wears out quickly causing the keys to come loose.

(d) The sleeper has only limited longitudinal and lateral strength to hold LWRs, particularly in the breathing length.

(e)  Due to the use of less metal under rail seat, the shocks and vibrations are directly transmitted to the ballast, resulting in poor retention of packing (loose packing) and hence an increased frequency of attention.

A new design of the CST-9 sleeper has recently been developed by Indian Railways for 90 R rails on MG lines as shown in Fig. 7.9.

(a)  The rail is held with clips and double-coil spring washers instead of a fixed lug and key.

(b) An insulating liner is provided between the rail and the sleeper.

(c)  A rubber pad is provided below the rail seat.

A CST-10 sleeper gives certain amount of elasticity to the track by virtue of its double-coil spring washer. The sleeper, however, has the limitation that it cannot be used with elastic fastenings.

The CST-11 sleeper is an improvement over the CST-10 sleeper. A special shoulder is provided to accommodate the Pandrol clip instead of clips and double-coil spring washers. An elastic rubber pad is provided between the sleeper and the rail seat instead of the rail resting directly on the sleeper. The CST-11 sleeper has the potential of being used on the modern track. The sleeper, however, is still in the experimental stage and the results are not very encouraging at present. Its design details are shown in Fig. 7.10.

CST-12 sleepers are designed to suit the IRN-202 clip, instead of the Pandrol clip. In this case the casting is quite complicated due to the shape of the clip. No firm has undertaken the manufacture of this sleeper as yet.

The purpose of the CST-13 sleeper is to use the existing CST-9 sleeper with certain additions and alternations made in the local workshop. It consists of the CST-9. 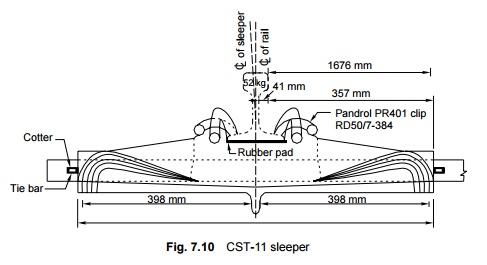 plate with the rubber pad under the rail and an additional rubber head to fill the gap occupied by the key. The rail is fastened to the sleeper by a sigma clip, similar to the 'fist fastening' used on Swedish Railways. To reduce the cost of the sleeper, the inner cotter is dispensed with. No adjustment of gauge is possible in this sleeper. The CST-13 sleeper is still under trial.