The transsphenoidal approach offers direct access to the sella with minimal risk of trauma and hemorrhage.

Tumors within the sella turcica and small adenomas of the pitu-itary can be removed through a transsphenoidal approach: an incision is made beneath the upper lip and entry is then gained successively into the nasal cavity, sphenoidal sinus, and sella tur-cica (see Table 61-3). Although an otorhinolaryngologist may make the initial opening, the neurosurgeon completes the open-ing into the sphenoidal sinus and exposes the floor of the sella. Microsurgical techniques provide improved illumination, mag-nification, and visualization so that nearby vital structures can be avoided. 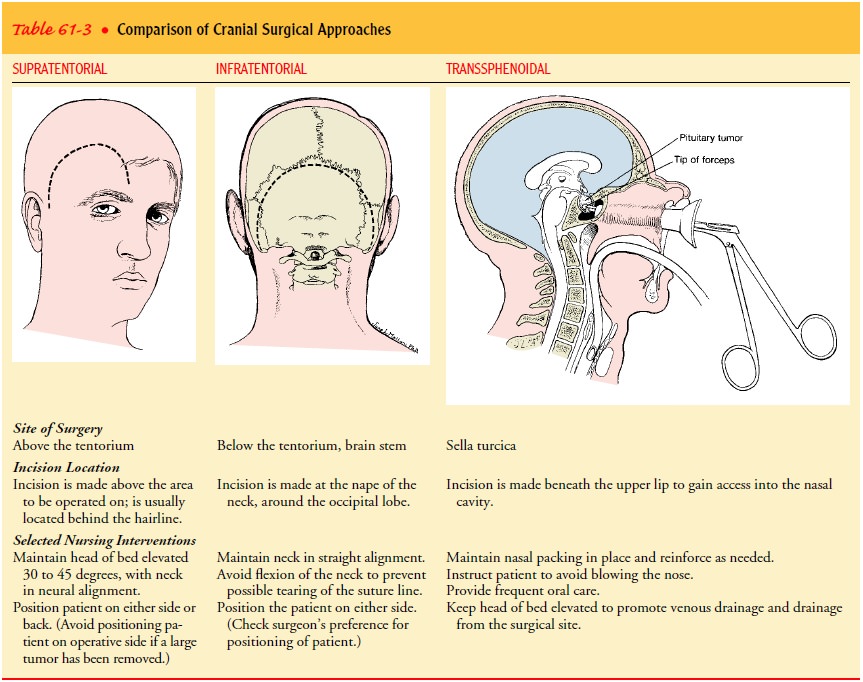 The transsphenoidal approach offers direct access to the sella with minimal risk of trauma and hemorrhage (Greenberg, 2001). It avoids many of the risks of craniotomy, and the postoperative discomfort is similar to that of other transnasal surgical proce-dures. It may also be used for pituitary ablation (removal) in pa-tients with disseminated breast or prostatic cancer.

Manipulation of the posterior pituitary gland during surgery may produce transient diabetes insipidus of several days’ duration (Greenberg, 2001). It is treated with vasopressin but occasionally persists. Other complications include CSF leakage, visual distur-bances, postoperative meningitis, and SIADH.

The preoperative workup includes a series of endocrine tests, rhi-nologic evaluation (to assess the status of the sinuses and nasal cavity), and neuroradiologic studies. Funduscopic examination and visual field determinations are performed, because the most serious effect of pituitary tumor is localized pressure on the optic nerve or chiasm. In addition, the nasopharyngeal secretions are cultured because a sinus infection is a contraindication to an in-tracranial procedure through this approach. Corticosteroids may be administered before and after surgery (because the surgery in-volves removal of the pituitary, the source of adrenocorticotropic hormone [ACTH] is removed). Antibiotics may or may not be administered prophylactically (Greenberg, 2001).

Deep breathing is taught before surgery. The patient is in-structed that following the surgery he or she will need to avoid vigorous coughing, blowing the nose, sucking through a straw, or sneezing, because these actions may cause a CSF leak (Greenberg, 2001; Hickey, 2003).

Because the procedure disrupts the oral and nasal mucous mem-branes, management focuses on preventing infection and pro-moting healing. Medications include antimicrobial agents (which are continued until the nasal packing inserted at the time of surgery is removed), corticosteroids, analgesic agents for discom-fort, and agents for the control of diabetes insipidus when neces-sary (Greenberg, 2001).

Vital signs are measured to monitor hemodynamic, cardiac, and ventilatory status (Eisenberg & Redick, 1998). Because of the anatomic proximity of the pituitary gland to the optic chiasm, vi-sual acuity is assessed at regular intervals. One method is to ask the patient to count the number of fingers held up by the nurse. Evi-dence of decreasing visual acuity suggests an expanding hematoma.

The head of the bed is raised to decrease pressure on the sella turcica and to promote normal drainage. The patient is cau-tioned against blowing the nose or engaging in any activity that raises ICP, such as bending over or straining during urination or defecation.

Intake and output are measured as a guide to fluid and elec-trolyte replacement. The urine specific gravity is measured after each voiding (Greenberg, 2001). Daily weight is monitored. Flu-ids are generally given when nausea ceases, and the patient then progresses to a regular diet.

The nasal packing inserted during surgery is checked fre-quently for blood or CSF drainage. The major discomfort is re-lated to the nasal packing and to mouth dryness and thirst from mouth-breathing. Oral care is provided every 4 hours or more fre-quently. Usually, the teeth are not brushed until the incision above the teeth has healed. The use of warm saline mouth rinses and a cool mist vaporizer is helpful. Petrolatum is soothing when applied to the lips. A room humidifier assists in keeping the mu-cous membranes moist. The packing is removed in 3 to 4 days, and only then can the area around the nares be cleaned with the prescribed solution to remove crusted blood and moisten the mu-cous membranes (Hickey, 2003).

Home care considerations include advising the patient to use a room humidifier to keep the mucous membranes moist and to soothe irritation. The head of the bed is elevated for at least 2 weeks after surgery.