Seizures are episodes of abnormal motor, sensory, autonomic, or psychic activity (or a combination of these) resulting from sud-den excessive discharge from cerebral neurons .

Seizures are episodes of abnormal motor, sensory, autonomic, or psychic activity (or a combination of these) resulting from sud-den excessive discharge from cerebral neurons (Greenberg, 2001; Hickey, 2003). A part or all of the brain may be involved. The international classification of seizures differentiates between two main types: partial seizures that begin in one part of the brain, and generalized seizures that involve electrical discharges in the whole brain (Chart 61-3). Most seizures are sudden and transient. 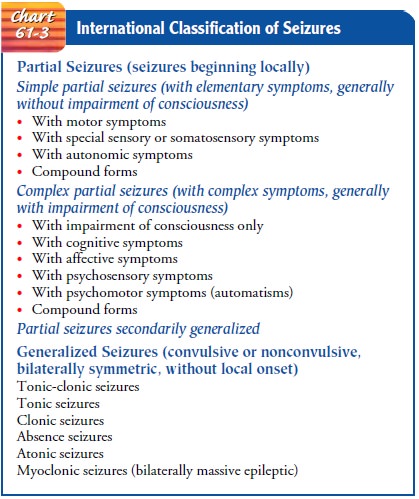 The underlying cause is an electrical disturbance (dysrhyth-mia) in the nerve cells in one section of the brain, causing them to emit abnormal, recurring, uncontrolled electrical discharges. The characteristic seizure is a manifestation of this excessive neu-ronal discharge. There may be associated loss of consciousness, excess movement or loss of muscle tone or movement, and dis-turbances of behavior, mood, sensation, and perception.

The specific causes of seizures are varied and can be catego-rized as idiopathic (genetic, developmental defects) and acquired. Among the causes of acquired seizures are hypoxemia of any cause, including vascular insufficiency, fever (childhood), head injury, hypertension, central nervous system infections, metabolic and toxic conditions (eg, renal failure, hyponatremia, hypocal-cemia, hypoglycemia, pesticides), brain tumor, drug and alcohol withdrawal, and allergies (Schumacher, Pruitt & Phillips, 2000). Cerebrovascular disease is the leading cause of seizures in the elderly (Berges, Moulin, Berger et al., 2000).

Nursing Management During a Seizure

A major responsibility of the nurse is to observe and record the sequence of symptoms. The nature of the seizure usually indicates the type of treatment that is required (Wulf, 2000). Before and during a seizure, the following are assessed and documented:

·       The presence or absence of automatisms (involuntary motor activity, such as lip smacking or repeated swallowing)

·      Incontinence of urine or stool

·       Unconsciousness, if present, and its duration

·      Inability to speak after the seizure

·       Whether or not the patient sleeps afterward

·       Cognitive status (confused or not confused) after the seizure 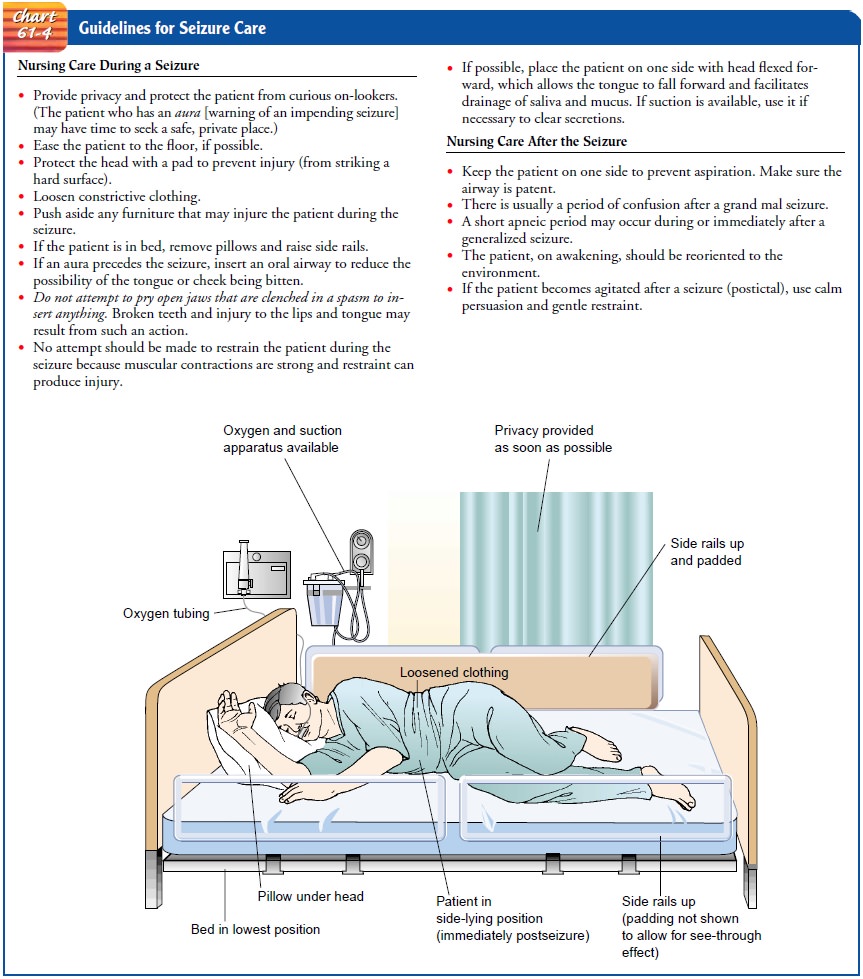 Nursing Management After a Seizure

After a patient has a seizure, the nurse’s role is to document the events leading to and occurring during the seizure and to prevent complications (eg, aspiration, injury). The patient is at risk for hypoxia, vomiting, and pulmonary aspiration. To prevent com-plications, the patient is placed in the side-lying position to facil-itate drainage of oral secretions and is suctioned, if needed, to maintain a patent airway and prevent aspiration, as described in Chart 61-4. Seizure precautions are maintained, including having available fully functioning suction equipment with a suction catheter and oral airway. The bed is placed in a low position with side rails up and padded if necessary to prevent patient injury. The patient may be drowsy and may wish to sleep after the seizure; he or she may not remember events leading up to the seizure and for a short time thereafter.