Transplantation of Solid Tissues and Organs

TRANSPLANTATION OF SOLID TISSUES AND ORGANS

The transplantation of solid tissues from one individual to another for thera-peutic purposes is a fairly routine medical procedure. Interest in transplanta-tion mainly arose during the Second World War during attempts to treat badly burned airmen using skin grafts from unrelated donors. Indeed, it was from experiments with skin grafting in rodents that the role of the immune system in the rejection of transplants was identified. Moreover, once this role was recognized, the search for drugs that could prevent rejection became more focused. The first successful kidney transplant was performed by Murray (1919–) in 1954 while the first human heart transplant, by Barnard (1922– 2001), was performed in 1967.

Once technical problems associated with the transplantation of whole organs were overcome, the major problem associated with transplanting organs was, and remains, rejection. This is caused by the immune system of the recipi-ent recognizing the cells of the donated organ as foreign and mounting an immune response against them. Unless steps are taken to prevent it, trans-plant rejection is inevitable, unless the donor and the recipient are identical twins. However, organ transplantation is now remarkably advanced compared with initial attempts. Indeed, a range of transplants are routinely performed (Table 6.12). 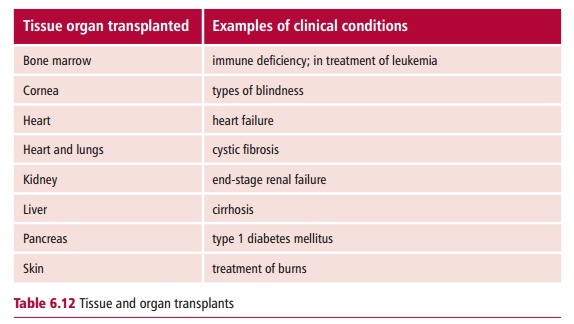 The rejection of a transplant is due to the immune system of the recipient recognizing the donated cells as foreign, that is nonself. Thus, the greater the genetic disparity between the donor and recipient, the greater the chances of rejection. The commonest type of clinical transplant is called an allograft, that is, a graft between two genetically nonidentical people. However, isografts, in which pieces of tissue are transplanted from one site to another on the same individual are also routinely undertaken, for exam-ple in skin grafting to treat burns. Isografts are not rejected since the donor and recipient are, of course, genetically identical. Occasionally, the graft may come from another species, such as those occasions when a baboon heart has been transplanted into a human. Such grafts are known as xeno-geneic transplants. Xenogeneic transplants are also subject to rejection, owing to the increased genetic disparity between the donor and the recipi-ent.

Other more common examples of xenogeneic grafts involve the use of porcine and bovine heart valves to replace diseased human ones. In the lat-ter case the valves are treated with glutaraldehyde to stiffen them and to mask their antigenic determinants, and these are often referred to as bio-prosthetic valves. There is much debate about proposals to breed geneti-cally engineered transgenic pigs to carry some human antigens on their cells to provide transplants for humans. Apart from the ethics of breeding animals purely to supply organs for humans, there is also the risk of the transfer of an unknown virus from pigs to humans, with possible disastrous consequences.

The transplanted cells of an allograft carry histocompatibility antigens on their membranes, which are recognized as foreign by the cells of the immune system. These histocompatibility antigens are found on proteins that are encoded by the Major Histocompatibility Complex (MHC) which, in humans, is also known as the Human Leukocyte Antigen (HLA) complex . The MHC complex is a genetic region that encodes several classes of proteins, some of which are membrane proteins. Class I MHC proteins (MHC I) are found on the membranes of all nucleated cells and are involved in the recognition of virus-infected cells by the precursors of cytotoxic T lymphocytes (TC cells). Class II MHC proteins (MHC II) are found on the membranes of antigen presenting cells such as macrophages and are involved in the recognition by THlymphocytes of foreign proteins on the surface of antigen presenting cells. It is relatively minor differences between the amino acid sequences of the MHC molecules of the donor and of the recipient that lead to the rejection of the transplanted tissue.

The rejection of an allograft usually takes place a few weeks after the trans-plant unless immunosuppressive treatments are given. Small lymphocytes recognize the transplanted cells as foreign. An acute rejection is caused by T lymphocytes that infiltrate the graft. The presence of T lymphocytes and monocytes in the infiltrate is a strong indicator of cell-mediated immunity. Both TH and TC cells are involved in graft rejection. The TC cells develop into cytotoxic T lymphocytes directed against the foreign histocompatibility anti-gens of the grafted cells and are able to destroy cells of the grafts directly, or indirectly by producing cytokines that attract monocytes and macrophages. The TH lymphocytes respond by producing cytokines that activate a variety of nonspecific cells to attack the graft.

Sometimes rejection may take place within hours or minutes of transplanta-tion, once the tissue has become revascularized. This is known as hypera-cute rejection and is due to antibodies against graft antigens being alreadypresent in the plasma of the recipient. These antibodies bind to the graft cells and activate complement leading to the rapid destruction of donor cells. Hyperacute rejection can also be brought about if the recipient already has antibody to MHC antigens present on the graft. These antibodies may be present for a number of reasons. For example, women who have had a number of pregnancies often have antibodies to the MHC antigens on the fetus, which were inherited from the father. Secondly, patients who have had a number of blood transfusions may become immunized to the MHC anti-gens on residual leukocytes present in the transfusion. Thirdly, patients who have had a previous transplant and rejected it will almost certainly have anti-bodies to any foreign MHC antigens that were present on that graft. Finally, antibodies to blood group antigens can also cause hyperacute rejection if they are already present in the recipient. For example, the blood group A, B and H antigens are present on the endothelial cells lining blood vessels. If a recipient of blood group A is given a transplant, for example a kidney from a person of blood group B, the anti-B antibodies in the plasma of the recipient will attack the endothelial cells of the graft and activate complement caus-ing destruction of the graft. For this reason, transplants are no longer carried out against a major blood group barrier. Given that pre-existing antibodies can cause a rapid rejection of a graft it is essential to know which potential recipients have such antibodies. Hence, a cross match is performed in which serum from the recipient is incubated with cells from the donor. If the donor cells are killed in the presence of recipient serum and complement, the trans-plant will not be undertaken and another potential recipient will be sought.

A chronic rejection takes place months or years after transplantation and is brought about by a combination of cell-mediated and humoral mechanisms.