Role of Complement in Transfusion Reactions

The activation of complement is also involved in some forms of immunological hypersensitivity and can cause some of the prob-lems associated with autoimmune disease .

ROLE OF COMPLEMENT IN TRANSFUSION REACTIONS 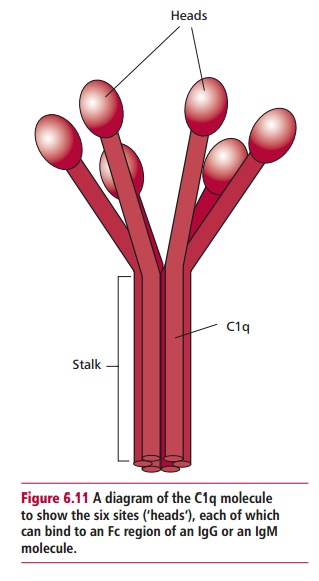 The classical pathway for complement activation is initiated when IgG or IgM binds to an epitope, in this case on the erythrocyte’s membrane. The antibody could be IgM, as is usually the case with Anti-A or Anti-B, or IgG, as is the case with antibodies to Rh antigens. The binding of antibody to the epitope induces a conformational change in the Fc region of IgG or IgM, allowing the binding of C1 protein. The C1 is comprised of three loosely associated pro-teins called C1q, C1r and C1s. The C1q is a large protein and has several bind-ing sites allowing it to bind to multiple Fc regions of antibodies (Figure 6.11). It requires at least two of these sites to bind to adjacent Fc regions on the sur-face of a cell to activate complement. For this reason IgM, which has several Fc regions per molecule, is more efficient than IgG at activating complement. Indeed, a single molecule of IgM can activate complement, whereas it takes about 1000 molecules of IgG to achieve the density required for activation. The binding of C1q activates C1r and this, in turn, activates C1s which acquires proteolytic activity (Figure 6.12). C1s has two substrates: C4 and C2 each of which are hydrolyzed to two fragments: C4a, C4b and C2a and C2b respec-tively. Proteins C4b and C2a are the larger fragments in each case and they combine to form a new proteolytic enzyme, C4b2a. A single enzyme molecule can generate a number of product molecules. Thus for a limited number of antibody molecules, many molecules of C4b2a are formed, because enzymic steps allow amplification to occur. C4b2a is the classical pathway C3 conver-tase which cleaves C3 into two fragments: a larger C3b moleculeand a C3a. The former binds to the target cell membrane where it may bind a molecule of the C3 convertase to form a C5 convertase, which catalyzes the hydrolysis of C5 into C5a and C5b. C5b binds to the cell membrane and forms a site for the build up of the Membrane Attack Complex (MAC). This is a large, cylindrical, hydrophobic structure constructed from single molecules of C5b, C6, C7, C8 and several molecules of C9. When it inserts into the mem-brane it forms a pore of approximately 10 nm diameter. Since amplification has occurred at each enzymic step, the target cell membrane may be covered with MACs (Figure 6.13). The MACs allow small ions to equilibrate across the cell membrane, increasing the osmotic pressure within the cell so that water moves across the membrane into the cell causing it to lyze. In vitro this can be seen as a sudden clearing of the cloudy suspension of erythrocytes. Invivo, several regulatory proteins may prevent direct lysis of the erythrocytes.Instead, the cells are lyzed by phagocytic cells that have receptors for C3b and other complement proteins on their membranes. Table 6.9 lists some of the receptors involved in the clearance of sensitized erythrocytes. In the transfu-sion laboratory it is much easier to look for complement proteins on erythro-cytes than to look for antibodies, since a small amount of antibody may result in large amounts of complement on the cells. Thus, the presence of comple-ment proteins on cells is used as an indicator of the presence of complement binding antibodies.

It is essential for the transfusion scientist to be able to detect hemolytic anti-bodies. Such antibodies may be present due to transfusion reactions, to HDN or they may be autoantibodies to erythrocytes, as happens in autoimmune hemolytic anemia. 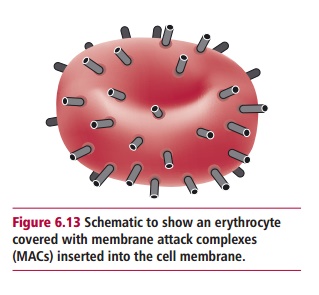 samples of serum by hemolysis in vitro using the complement activity in the serum or they ma The presence of relevant antibodies may be detected in y be detected by examining the surface of erythrocytes for activated complement proteins. The presence of complement in serum dimin-ishes with storage, therefore it is recommended that samples of sera should be stored at –20ºC to retain activity if they are to be used for hemolysis deter-mination. Further, some anticoagulants, such as EDTA, inhibit complement, which may be significant if plasma rather than serum is available. Other sera may have ‘anticomplementary’ activity due to the presence of a denatured form of complement known as complementoid.

Receptors for C3b are found on all the major types of phagocytic cells and also on erythrocytes themselves, so that even these cells have a role in the clear-ance of immune complexes from the blood. Antigen–antibody complexes coated in C3b bind to erythrocytes and are removed by macrophages in the spleen and liver.

In vivo, other complement proteins trigger inflammatory reactions. For exam-ple, C3a, C4a and C5a cause blood basophils and tissue mast cells to degranu-late. The mediators released stimulate inflammation , which may have consequences in a patient who has anti-erythrocyte antibodies. In addi-tion, both C3a and C5a are chemotactic factors for neutrophils and promote a build up of these cells, which may itself lead to clinical problems.

The alternative pathway for complement activation is a positive feedback loop which is usually initiated by microorganisms such as bacteria and yeasts. However, feedback may utilize C3b, produced in the classical pathway, and amplify the amount of C3b produced. The positive feedback loop is control-led to prevent an overproduction of C3b. One regulatory step binds C3b to a plasma protein called Factor H and in the bound form is inactivated by Factor I, which converts it to C3bi, a form that can no longer enter the amplification loop. C3b may then be degraded into smaller fragments, C3dg and C3d, which may remain bound to the erythrocyte membrane. The presence of natural regulators means that many antibodies that are potentially able to lyze eryth-rocytes are unable to do so in vitro and the transfusion scientist may look for the presence of C3d on erythrocytes to determine whether antibodies to them are present.