The ABO blood group system classifies people into one of four major blood groups: A, B, AB and O, according to the different type of antigen present on the surfaces of their erythrocytes.

The ABO blood group system classifies people into one of four major blood groups: A, B, AB and O, according to the different type of antigen present on the surfaces of their erythrocytes. The frequencies of these blood groups vary between different populations (Table 6.3).

THE ANTIGENS OF THE ABO SYSTEM 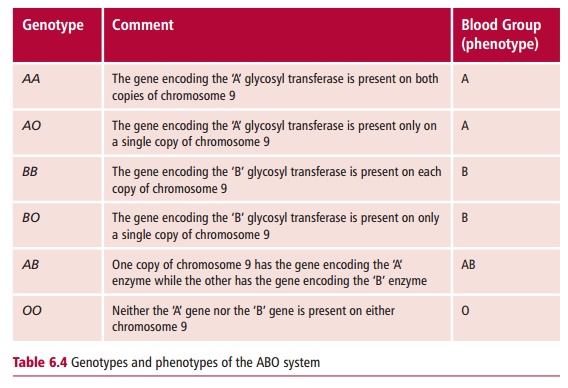 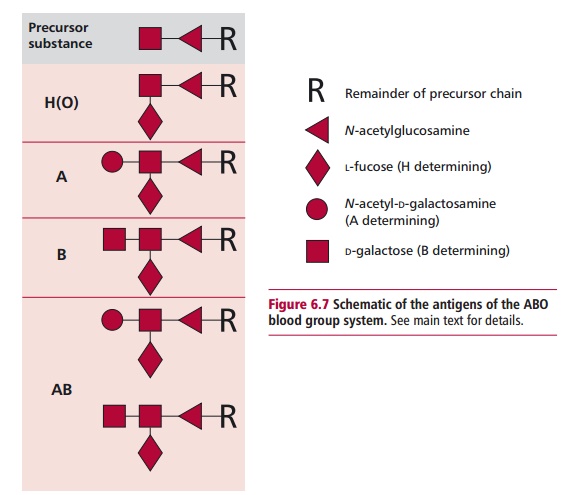 Approximately 75% of Caucasians attach A, B and H antigens (depending on their blood group) to soluble proteins and secrete them into saliva and other body fluids, and are known as secretors. Secretor status is dependent on the expression of a fucosyl transferase, which is encoded by the SECRETOR gene on chromosome 19. In the past, the presence or absence of secreted ABH anti-gens has been used in forensic science for the purpose of identification. 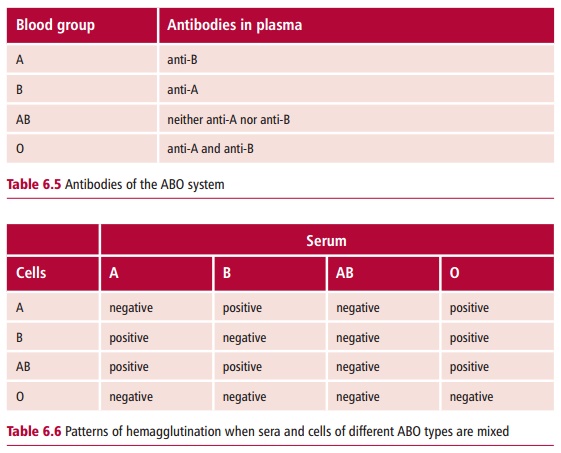 Antibodies directed against the ABO antigens generally belong to the IgM class though IgG antibodies may also be found. IgM antibodies are pentameric molecules, which are efficient agglutinators of cells and activa-tors of complement. These antibodies, which are sometimes called isohemag-glutinins because they agglutinate erythrocytes, are sometimes also termed ‘natural antibodies’ because they are present even though people have never been ‘immunized’ with blood of an inappropriate group. In fact, the blood group antigens are also found on some common bacteria and the antibodies that are produced following infection are capable of cross-reacting with blood group antigens. Of course, people do not make antibodies to antigens that they themselves express, because of immunological tolerance .

An example of an incompatible blood transfusion would be when a patient of blood group A, the recipient, is given blood from a donor who is blood group B. In this case the anti-B antibodies present in the plasma of the recipient bind to the donated erythrocytes and activate complement. This results in the simultaneous lysis of billions of erythrocytes in the donated blood. At the same time, the limited amount of anti-A antibodies in the donated blood binds to the recipient’s erythrocytes and hemolyzes those too. The lysis of so many erythrocytes, called acute intravascular hemolysis, releases so much hemoglobin that acute renal failure and shock result. This has serious clinical consequences and, indeed, is fatal in approximately 10% of cases. In addition to the problems caused by the release of hemoglobin, the fragments of erythrocyte membrane released may also initiate the blood clot-ting systems, leading to disseminated intravascular coagulation (DIC). The consequences of an incompatible transfusion may vary according to the blood group involved. For example, antibodies to some of the other blood group systems may result in a delayed, extravascular hemolysis. Slower destruction of the donated cells may lead to a decreasing hemoglobin concentration, with the patient suffering a fever and general malaise.

The administration of an incompatible donation is most often due to errors postdonation, and is rarely due to mismatching of bloods.