All patients who receive an allograft are liable to reject the transplant, even if the recipient and host are closely matched for histocompatibility antigens.

All patients who receive an allograft are liable to reject the transplant, even if the recipient and host are closely matched for histocompatibility antigens. This is because relatively few of the HLA antigens are tested for, and complete matches are rare. Thus, all patients who receive an allograft have to take immu-nosuppressive drugs to prevent rejection resulting from an immune response. Immunosuppressive treatments fall into a number of categories. The first gen-eration of immunosuppressive drugs were used to prevent lymphocytes from proliferating (Table 6.15). As these drugs act by inhibiting cell division, they are also used in the treatment of cancer. Their actions are described. Corticosteroids, such as cortisol, are also immunosup-pressive agents but act principally by suppressing inflammation. They are still used, often in combination with other drugs such as methotrexate. All the first generation drugs produce a ‘blanket’ immunosuppression and prevent all immune responses. This makes the patient more susceptible to infections of all kinds, but especially to opportunistic infections caused by such organisms as Candida albicans. Immunosuppressed patients are also more susceptible to the types of cancers associated with viruses, including lymphoma, associ-ated with the Epstein-Barr virus (EBV) and Kaposi’s sarcoma, associated with the Kaposi’s sarcoma associated herpes virus (KSV). First generation immu-nosuppressive treatments also have significant toxicity, because they affect all dividing cells, including those of the bone marrow and of the GIT. Some, such as methotrexate, also show liver toxicity.

The second generation of immunosuppressive treatments target T lym-phocytes rather than B cells. These included the use of antilymphocyte globulin, an antibody raised against human T lymphocytes. The third gen-eration of immunosuppressive treatments are much more selective in their action and target only those T cells which have been activated by an antigen. Cyclosporin A, a cyclic peptide (Figure 6.17) derived from the soil fungus Tolypocladium inflatum gams, is most commonly used. The peptide showsconsiderable immunosuppressive action, without the bone marrow toxic-ity demonstrated by other drugs. Tacrolimus, a macrolide antibiotic (Figure6.18) derived from Streptomyces tsukubaensis, is similar to cyclosporin A inaction. It is more powerful than cyclosporin A but also has more side effects. Mycophenolate mofetil is an example of a prodrug, which is converted in the body to mycophenolic acid, another powerful immunosuppressive agent. 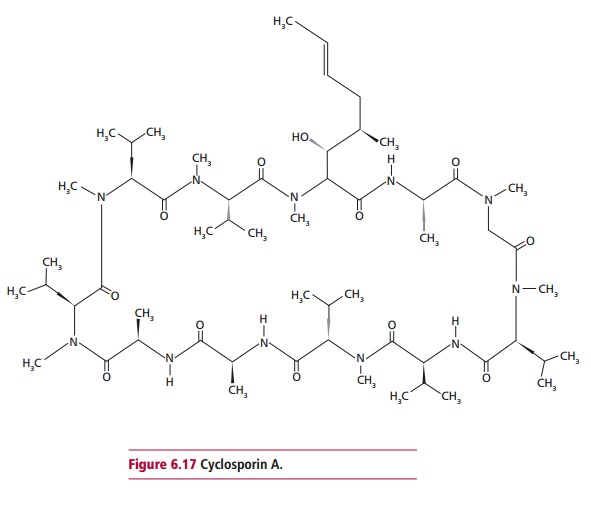 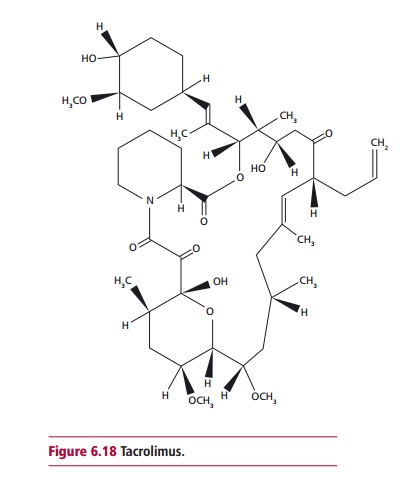