The Rh blood group system divides people into Rh positive and Rh negative groups depending on whether or not their erythrocytes carry the Rh anti-gen.

The Rh blood group system divides people into Rh positive and Rh negative groups depending on whether or not their erythrocytes carry the Rh anti-gen. Landsteiner and Wiener discovered this system in 1940. They showed that antisera raised in guinea pigs against erythrocytes from rhesus monkeys reacted with 85% of Caucasian blood donors in New York. The Rh system of blood group antigens is often described as if it is a single antigen. However, it consists of a complex series of antigens, which are specified by two genes: RHD and RHCE. The former encodes the RhD protein which expresses the Dantigen while the latter encodes the RhCcEe protein which carries either the C or c antigen together with the E or e antigen. At one time it was thought that another antigen, termed the ‘d’ antigen, was present when the D antigen was absent. It is now recognized that the d antigen does not exist. However the term is still used to indicate the D negative phenotype.

An individual person inherits a set of genes from each parent, with the pos-sible haplotypes (haploid genotypes) being shown in Table 6.7, where the symbol ‘d’ is used to express a lack of the RHD gene. Under the Fisher sys-tem for nomenclature, each Rh haplotype is assigned a code. The commonest genotypes are shown in Table 6.8. If an individual has the D antigen, they are said to be RhD positive. Thus, amongst the most common genotypes the only 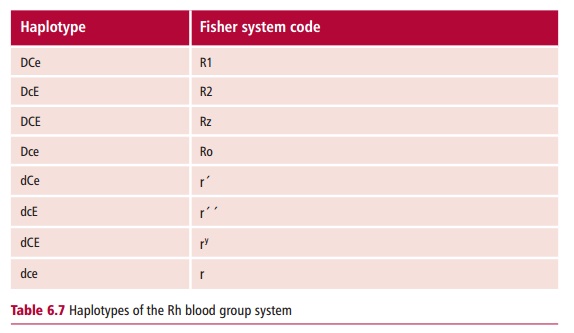 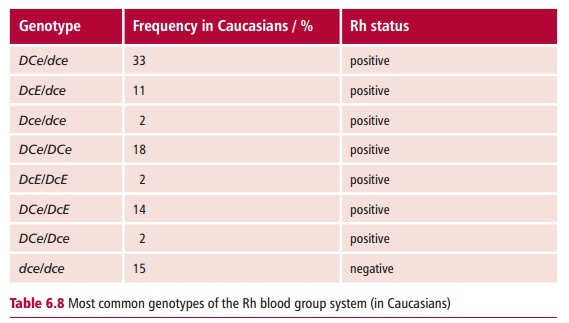 individuals who are RhD negative are those with the genotype dce/dce (or rr using the Fisher code) and these constitute 15% of Caucasians. RhD nega-tive individuals do not normally have antibodies to the D antigen. However, they can become sensitized if transfused with blood from an Rh positive indi-vidual. For example, a person with the genotype dce/dce who is transfused with blood from a DCE/DCE individual may make antibodies to C, D and E antigens, although anti-D antibodies are the most common.

HEMOLYTIC DISEASE OF THE NEWBORN

Hemolytic disease of the newborn (HDN) is a serious disease characterized by anemia, splenomegaly, hepatomegaly and edema. The condition is caused by the transfer of maternal anti-erythrocyte antibodies across the placenta. The condition may arise in the offspring of women who are RhD negative. Such women may become sensitized to RhD antigen when they give birth to an RhD positive child. At birth, some of the baby’s blood can enter the maternal circulation and the mother will respond by making anti-D antibod-ies. This does not have any clinical consequence for the child itself, but may cause problems during a subsequent pregnancy, if that fetus is RhD posi-tive. Antibodies to Rh antigens are clinically significant during pregnancy because they are of the IgG class. Thus they can cross the placenta and bind to the fetal erythrocytes. Although Rh antibodies are IgG, they do not appear to activate complement. Instead, the antibody-coated erythrocytes bind to receptors for the Fc portion of IgG on monocytes and macro-phages, a phenomenon known as immune adherence. This occurs when blood is traveling through the spleen and liver. The uptake and subsequent destruction of antibody-coated erythrocytes in these organs is known as extravascular hemolysis.

The consequences for the second or subsequent child depend on the extent of maternal sensitization and, hence, the amount of circulating antibody. Destruction of fetal erythrocytes in utero may lead to fetal anemia and hyperbilirubinemia, an excess of bilirubin in the blood . The concentrations of serum bilirubin indicate the degree of hemolysis. Babies born with significant levels of bilirubin will suffer kernicterus or brain damage due to the build up of the lipid soluble bilirubin in the brain. The baby will need phototherapy, which helps to breakdown the bilirubin.

If the anemia is severe, the fetus may die of heart failure or hydrops fetalis, which is an extreme edema of the entire body of the fetus. This may lead tospontaneous abortion. A longer term child may be stillborn. The considerably enlarged spleen and liver in a child born alive with HDN is associated with erythrocyte destruction in these organs. The baby may also have a facial rash indicative of hemorrhages due to impaired platelet function.

All pregnant women in the UK and other developed countries now have their ABO and Rh status checked at their initial hospital booking, which is usually at 12–16 weeks of pregnancy. They are also checked for anti-D, anti-c or anti-Kell and, if these are present, the concentrations will be monitored regularly throughout the second trimester of pregnancy. If the levels of clinically significant antibodies start to rise, clinical intervention may be necessary. Concentrations of anti-D below 4 international units (IU) cm–3 are unlikely to cause HDN, those between 4–15 IU cm–3 have a moder-ate risk of HDN, while values above 15 IU cm–3 are associated with a high risk of HDN.

Since the 1970s, a prophylactic treatment to prevent Rh sensitization has been available which has greatly reduced the incidence of HDN due to RhD sensitization. The treatment involves the intramuscular injection of at least 500 IU of anti-D immunoglobulin within 72 h of the birth of a RhD positive baby. The administered antibodies bind to any erythrocytes from the baby which have entered the maternal circulation and destroy them, preventing the mother from making antibodies.

In 2002, the National Institute for Clinical Excellence (NICE) in the UK recom-mended that antenatal anti-D prophylaxis should be routinely offered to any pregnant Rh negative woman who has not made anti-D antibodies to prevent sensitization predelivery caused by, for example, a placental bleed.

The direct antiglobulin test (DAT), formerly known as the Direct Coombs test, is undertaken to see if maternal antibodies are present on the baby’s erythrocytes. If they are present, then a sample of the erythrocytes from the baby will be agglutinated by an antibody to IgG, known as antihuman globu-lin (Figure 6.8).

The Kleihauer test uses the Kleihauer-Betke stain and is a method of assess-ing the volume of fetal blood that has entered the maternal circulation. In most cases the volume that has entered will be less than 4 cm3, and 500 IU of Anti-D is sufficient to remove the erythrocytes in this volume. However, for less than 1% of women, the volume of fetal blood is larger and the mother consequently needs more than this amount of anti-D. The Kleihauer test is carried out on a sample of maternal blood 2 h after delivery. The principle of the test is that the hemoglobin in adult erythrocytes can be eluted with acid, whereas the hemoglobin of fetal erythrocytes is resistant to acid elu-tion. A smear of maternal blood is placed in a solution of hematoxylin and hydrochloric acid, pH 1.5, and then is counterstained with eosin. The mater-nal red cells appear as pale ‘ghosts’ whereas the fetal erythrocytes stain pink with eosin, while the leukocytes stain blue (Figure 6.9). The ratio of fetal to maternal cells is an indicator of the volume of blood that has entered the circulation. This test can also be carried out during pregnancy if a placental bleed is suspected. 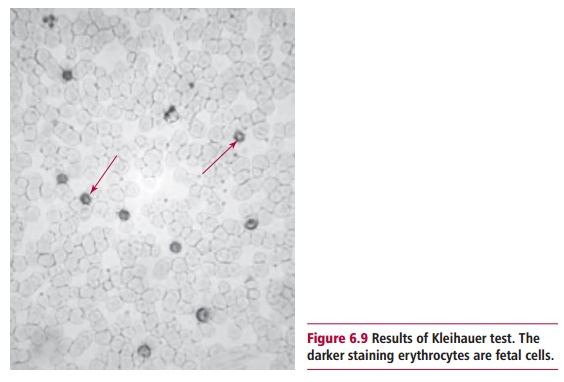