The first successful engineering of a transgenic primate resulted in the birth of ANDi, a rhesus monkey carrying the gfp gene, in late 2000.

So far no primate has been successfully cloned, although transgenic rhesus monkeys have been generated. The first successful engineering of a transgenic primate resulted in the birth of ANDi, a rhesus monkey carrying the gfp gene, in late 2000. ANDi stands for “inserted DNA” (read backwards). A crippled retrovirus vector was used to deliver the gene for GFP to unfertilized eggs that were later fertilized in vitro. Treatment of 224 egg cells gave 20 embryos, five pregnancies, and eventually, three live male monkeys. Only one of these, ANDi, was transgenic and expressed GFP. ANDi does not fluoresce green because GFP levels are too low (also, rhesus monkeys have brown fur over much of their bodies).

There have been several exaggerated claims for primate cloning. Rhesus monkeys have been generated by splitting an embryo at the eight-cell stage into four genetically identical two-cell embryos, and this has been touted as “cloning.” However, it is merely artificial twinning, rather than true nuclear transplantation as with Dolly. Nonetheless, it seems likely that by the time this book is published rhesus monkeys will have been cloned.

There seems no reason why cloning of monkeys, apes, and humans via nuclear transplantation should not be technically possible. One possible objective for human cloning is to obtain tissue for transplantation rather than to generate a new human individual. Reprogrammed human cells would be grown in culture to provide such material. This is known as therapeutic cloning, and developments in this area are likely to continue rapidly.

We will end this section on a cozy note. In November of 2001, the first pet, a kitten, named CC (for CopyCat; Fig. 15.20), was cloned at Texas A&M University. The objective of this cloning program is for people to have their favorite pets cloned—providing they have enough money, of course. One cannot help remembering that the ancient Egyptians mummified cats as well as people. CC is the only one of 87 implanted cloned embryos to survive. This is similar to the success rate for cloned sheep, mice, and so forth. Obviously, routine cloning of pets needs a higher success rate to be economically feasible. 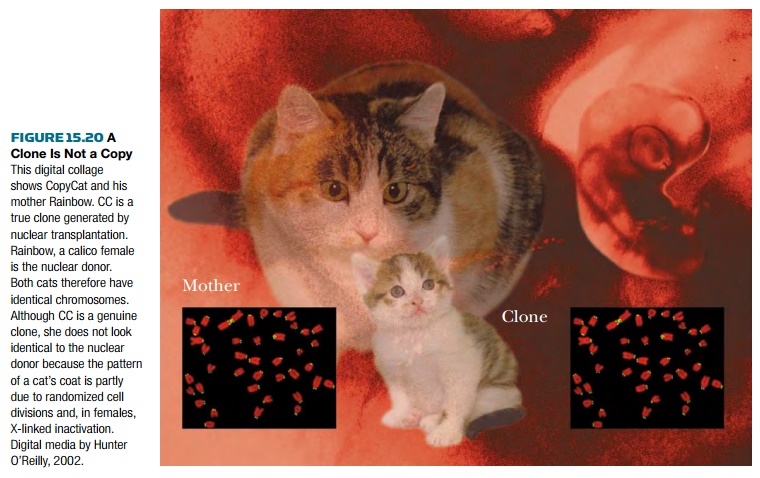