Once a suitable transgene is available the standard scenario for the creation of a transgenic animal by nuclear microinjection is as follows:

Once a suitable transgene is available the standard scenario for the creation of a transgenic animal by nuclear microinjection is as follows:

1.     The transgene is injected into fertilized egg cells (Fig. 15.1). Just after fertilization, the egg contains its original female nucleus plus the male nucleus from the successful sperm. These two pronuclei will soon fuse together. Before this happens, the DNA is injected into the male pronucleus, which is larger and therefore a better target for microinjection. Nuclear microinjection requires specialized equipment and great skill. The success rate varies from 5% to 40% among various laboratories.

2.     The egg is kept in culture during the first few divisions of embryonic development.

3.     The engineered embryos are then implanted into the womb of a female animal, the foster mother. Here they develop into embryos and, if all goes well, into newborn animals. 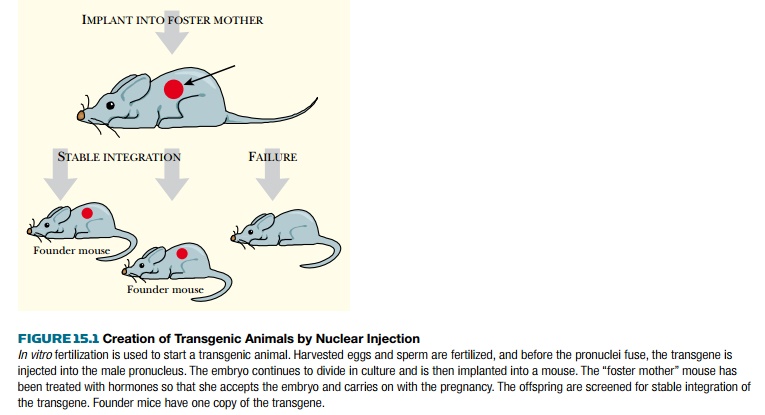 There is some variability in the timing of integration of DNA injected into the male pronucleus. In some cases, the DNA integrates more or less immediately, so that all cells of the resulting animal will contain the transgene. Less often several cell divisions may happen before DNA integration occurs and the final result will be a chimeric animal, in which some cells contain the transgene and others do not. Sometimes multiple tandem copies of the transgene integrate into the same nucleus—such constructs are often unstable and the extra copies are often deleted out over successive generations. Integration of the incoming DNA into the host cell chromosomes occurs at random. Often, this is accompanied by rearrangements of the surrounding chromosomal DNA. This suggests that integration often occurs at the sites of spontaneous chromosomal breaks.