Although nuclear injection was the first approach used to make transgenic animals, and is still the most widely used, there are several alternative procedures.

Although nuclear injection was the first approach used to make transgenic animals, and is still the most widely used, there are several alternative procedures. As discussed, engineered retroviruses have been used in gene therapy to introduce DNA into the chromosomes of animal cells. Retroviruses can infect the cells of early embryos, including embryonic stem cells (see later discussion). Hence, retrovirus vectors may introduce transgenes.

The advantages of using a retrovirus are that only a single copy of the retrovirus plus transgene is integrated into the genome. In addition, use of retroviruses does not require skill in microinjection. The retrovirus carrying the transgene construct is added to the fertilized egg and allowed to infect as normal. The egg is then transplanted into a pseudopregnant female mouse. The remainder of the procedure is as before.

Disadvantages are that virus DNA is introduced along with the transgene and that retroviruses can carry only limited amounts of DNA. Furthermore, founder animals made using retroviruses are always chimeras, because insertion of the virus does not occur exactly when the nuclei fuse. Consequently, retroviruses are rarely used in attempts to create fully transgenic animals. On the other hand, partially transgenic animals that have some sectors or tissues altered are useful because the transgenic tissues may be compared with normal tissue within the same animal. This can eliminate any doubts on whether the defects or changes caused by the transgene are merely due to differences among animals or truly due to transgene expression. 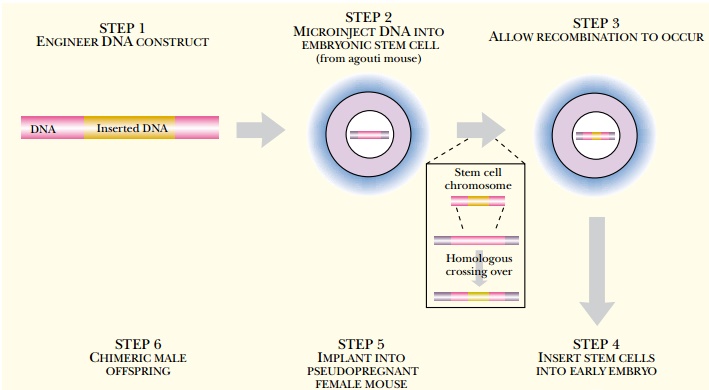 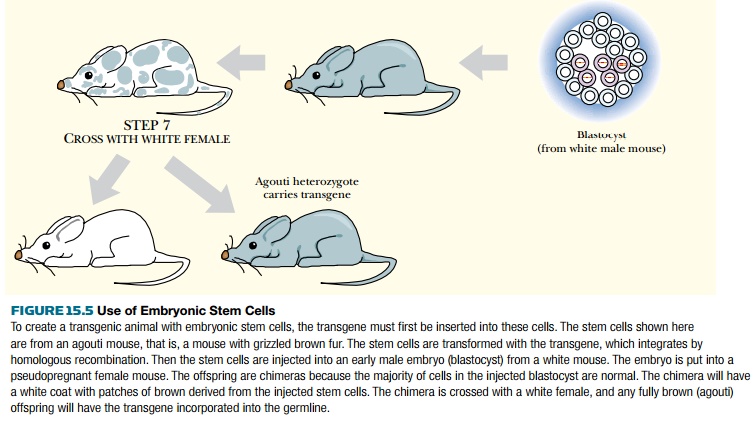 Engineered embryonic stem cells are then inserted into the central cavity of an early embryo at the blastocyst stage (Fig. 15.5). This creates a mixed embryo and results in an animal that is a genetic chimera consisting of some transgenic tissues and others that are normal.

If the host embryo and the embryonic stem cells are from different genetic lines with different fur colors, the result is an animal with a patchwork coat. This allows the transgenic sectors of the animal to be identified easily. This chimeric founder animal must then be mated with a wild-type animal. If the embryonic stem cells have contributed to the germline, then the coat color characteristic of this cell line will be transmitted to the offspring. In mice black (recessive) and agouti (dominant) coat colors are often used. The males because the resulting male chimeras can father many children when crossed with wild-type females.