Another way to control the expression of a transgene is via site-specific recombination. In this approach, segments of DNA are physically removed or inverted to achieve activation of the transgene.

Another way to control the expression of a transgene is via site-specific recombination. In this approach, segments of DNA are physically removed or inverted to achieve activation of the transgene. These DNA manipulations are done after the DNA carrying the transgene and associated sequences has been successfully incorporated into the germline chromosomes of the host animal.

Two such recombinase systems have been widely used: the Cre recombinase from bacterial virus P1 and the Flp recombinase (flippase) from the 2-micron plasmid of yeast. Both Cre and Flp recognize 34 base-pair sites (known as loxP and FRT, respectively) consisting of 13 base-pair inverted repeats flanking a central core of 8 base-pairs.

We have already described the use of the Cre/loxP system in plants to delete unwanted DNA segments after integration of incoming transgenic DNA. Similar summarized as follows:

(a)   Removal of selective markers. Once transgenic DNA has been successfully integrated, the antibiotic resistance gene used for selection and/or the reporter gene used for screening are no longer needed. If they are enclosed between loxP or FRT sites, they can be removed, leaving a transgenic organism with only the actual transgene (plus a single copy of the loxP or FRT site).

Creation of conditional knockout mutants. Transgenic constructs may be designed so that a specific gene can be deleted in vivo. Generally, two loxP sites are inserted into the introns flanking an essential exon of the target gene. On recombination, the exon will be deleted and the target gene will be inactivated. This allows investigation of genes whose knockout mutations are lethal at the embryonic When these recombinase systems are used, the recognition sequences are included in the transgenic constructs. Later, the recombinase itself is provided by one of three methods:stage. The animal can be allowed to grow into an adult before the recombinase is activated to generate the knockout.

When these recombinase systems are used, the recognition sequences are included in the transgenic constructs. Later, the recombinase itself is provided by one of three methods:

(a)   The gene for recombinase may be carried on a plasmid that is transformed into the animal. The recombinase will be expressed transiently, assuming the plasmid does not integrate or survive over the long term.

(b)  The recombinase gene may itself be part of the transgenic construct and be induced by some external stimulus.

This approach can save a lot of work. Instead of making separate transgenic constructs for each gene under each condition, two sets of transgenic animals, usually mice, are generated and are then crossed to investigate a wide range of genes and environmental conditions. One set of mouse lines has Cre under the control of a variety of promoters that are specific for different tissues or induced by different signals. The second set of mouse lines has a series of different target genes flanked by loxP sites. Thus the role of any particular target gene may be investigated under any of the available conditions by crossing the appropriate pair of strains. 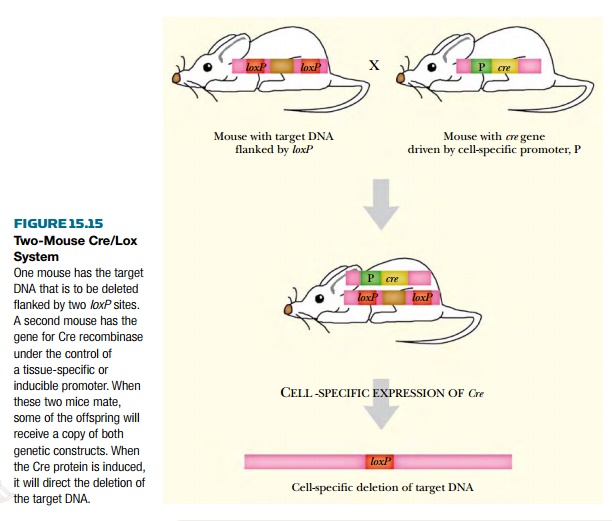