The classic illustration of transgenic technology was the creation of larger mice by inserting the rat gene for growth hormone.

The classic illustration of transgenic technology was the creation of larger mice by inserting the rat gene for growth hormone. Growth hormone, or somatotropin, consists of a single polypeptide encoded by a single gene. In 1982 the somatotropin gene of rats was cloned and inserted into fertilized mouse eggs. The eggs were then placed into foster mother mice that gave birth to the genetically engineered mice. These transgenic mice were larger (about twice normal size), although not as large as rats. This was the first case where a gene transferred from one animal to another not only was stably inherited, but also functioned more or less normally. 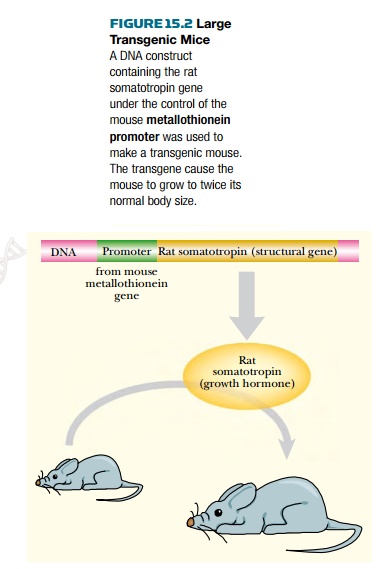 To express the rat somatotropin gene, it was put under the control of the promoter from an unrelated mouse gene, metallothionein, which is normally expressed in the liver (Fig. 15.2). Instead of being made in the pituitary gland, the normal site for growth hormone, the rat somatotropin was mostly manufactured in the liver of the transgenic mice. Even though made in the “wrong” location, the hormone worked and made the mice larger. Human somatotropin has also been expressed in mice and also gives bigger mice.

Size does not depend solely on growth hormone. Defective growth hormone receptors also inhibit growth. African pygmies rarely grow taller than 4 feet, 10 inches, yet they have normal levels of human somatotropin. It appears that pygmies have defective growth hormone receptors. These normally bind the somatotropin circulating in the bloodstream and are necessary for the hormone to work on its target tissues. Dwarfism, among nonpygmies, may be due either to defects in production of somatotropin or to a shortage of receptors. Recombinant human somatotropin (rHST) is now used to treat the hormone-deficient type of dwarf. However, receptor-deficient dwarfs cannot yet be successfully treated.