It is possible to combine pathway engineering with cloning to produce improved livestock (as opposed to merely using transgenic animals as the source of a single useful protein).

It is possible to combine pathway engineering with cloning to produce improved livestock (as opposed to merely using transgenic animals as the source of a single useful protein). For example, the genes for the cysteine biosynthetic pathway are absent in mammals. Consequently mammals, including sheep, cannot make the sulfur-containing amino acid cysteine and must receive it in their diet. Sometimes cysteine is limiting for wool growth. Adding extra cysteine to the diet works poorly because of its uptake and degradation by microorganisms in the sheep’s intestine.

Many bacteria do synthesize cysteine. Two steps are needed, starting from the amino acid serine plus inorganic sulfide (Fig. 15.19). In enteric bacteria these two key enzymes, serine transacetylase and acetylserine sulfhydrylase, are encoded by the cysE and cysK genes, respectively. These two bacterial genes have been cloned from Salmonella and placed under control of the mouse metallothionein promoter. The construct has been successfully integrated into transgenic mice, which expressed both enzymes. Furthermore, when these mice were deprived of the two sulfur-containing amino acids, cysteine and methionine, they remained healthy and made their own cysteine. The animals did need inorganic sulfide in their diet. 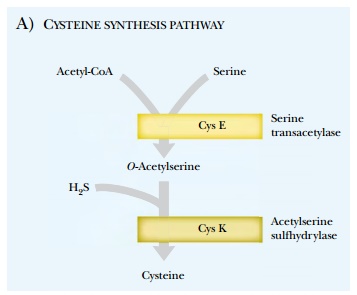 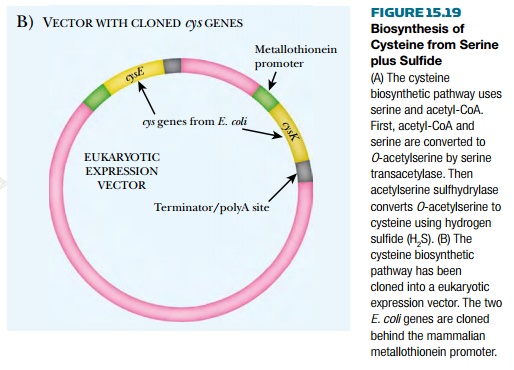 Although transgenic sheep carrying bacterial cysE and cysK genes have been made, high-level expression of these genes and synthesis of cysteine in the desired location (the epithelium of the rumen) have not yet been achieved. Several other schemes to improve livestock, including synthesis of other essential amino acids such as lysine and threonine, are in the early experimental stages.