The three diseases that kill most people are acquired immunodeficiency syndrome (AIDS), tuberculosis, and malaria.

The three diseases that kill most people are acquired immunodeficiency syndrome (AIDS), tuberculosis, and malaria. Each year, malaria infects some 300 to 500 million people and kills around 2 million, mostly African children. The Plasmodium parasite is transmitted by mosquitoes—as are several other major diseases including yellow fever, dengue fever, and filarial nematodes. At the moment malaria is spreading and mosquitoes that are resistant to insecticides such as DDT are emerging. The 260-Mb genome of the mosquito Anopheles gambiae, which transmits malaria, has been fully sequenced and a variety of genetic markers is available. The genome of Aedes aegypti, which transmits yellow fever, is about three times larger (800 Mb), and its sequencing is under way.

DNA can be inserted into germline cells of mosquitoes, as for flies. Several transposons have been used to insert DNA into the genomes of mosquitoes by an approach similar to the use of the P element in Drosophila described earlier. The piggyBac transposon from the cabbage looper (a butterfly) and the Minos transposon from Drosophila hydei are the most widely used. Eye color genes and green fluorescent protein (GFP) have been used as genetic markers. The transgenes are usually expressed from Drosophila promoters because these often work well in other insects.

One possible approach to controlling mosquito-borne diseases is to genetically engineer mosquitoes that are resistant to colonization by the disease agent. The noncarrier mosquitoes would then be released into the wild where they would displace the population of disease-transmitting mosquitoes. Several attempts have been made to engineer mosquitoes that will no longer carry malaria, or at least carry far fewer malarial parasites. So far, engineering has been done with species of malaria that attack birds or mice. It is hoped that similar approaches will work against human species of malaria and in the Anopheles mosquito, which carries them. 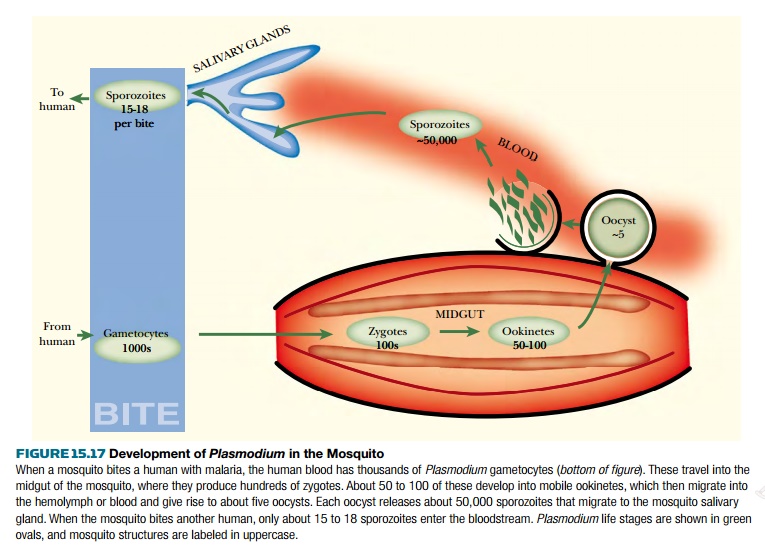 After taking in a meal of infected blood from a human or animal, the mosquito immune system attacks the incoming malarial parasites and does in fact kill a substantial proportion (Fig. 15.17). One approach to engineering mosquitoes therefore attempts to increase expression of proteins such as defensin A that belong to the mosquitoes’ own immune system. Proteins from other species have also been expressed in the mosquito midgut in attempts to block transmission. For example, transgenic mosquitoes that express bee venom phospholipase from a midgut-specific promoter destroy 80% to 90% of the incoming malarial parasites.

Another approach uses genetically engineered human antibodies. For example, artificial genes for single-chain antibodies or scFv fragments to the circum-sporozoite protein of malaria have been constructed. (The sporozoite is the form of the parasite transferred from mosquito to mammal-see Fig. 15.17.) When expressed in the mosquito salivary glands, the antibody greatly reduced the numbers of malaria sporozoites.

After engineering a mosquito that no longer transmits malaria, the next problem is replacing the wild mosquito population with the engineered ones. One way to do this is to use a genetic suicide system consisting of two genes, A and B, which must both be inherited together for survival. Such a system is similar to those responsible for programmed cell death in bacteria. Engineered males with two copies each of gene A and gene B would be released.

Insects who inherit A and B together will survive, but those who get A without B or vice versa will die. Hybrids between engineered males and wild females will survive because they inherit one A and one B. However, in the next generation, when the hybrids mate with wild mosquitoes, some of the offspring will receive just gene A or gene B but not both and will therefore die. This generates a selective pressure that drives the A and B genes through the population, because the offspring of wild flies die more often than those of engineered or hybrid flies. Genes that kill the malaria parasite or make mosquitoes susceptible to insecticides would be linked to the suicide genes and would therefore spread through the population with them. Computer modeling suggests that modifying a mere 3% of the population is enough to spread the genes.