There are many cases in which it would be helpful to control the expression of a transgene. For industrial production of a protein product, high-level expression of the transgene is usually preferred. But this is not always true—some proteins are toxic in high amounts, and gene expression needs to be kept low while establishing the line of transgenic animals. However, when transgenes are used for functional analysis, it is clearly convenient to be able to switch gene expression on and off as required. This is especially important for those genes that are normally expressed only in particular cell lines or at certain developmental stages. A variety of systems exist that allow the experimenter to control transgenes.

Early transgenic constructs often used natural promoters from the host animal (i.e., endogenous promoters) that respond to certain stimuli. For example, rat growth hormone was put under control of the mouse metallothionein promoter when inserted into mice. This promoter is induced by heavy metals such as lead, cadmium, and zinc. The least toxic of these, zinc, is actually used for induction, but even so there will be toxicity problems if continuous long-term induction is needed.

The heat shock promoter from the Drosophila Hsp70 gene is another example of a natural promoter used to drive expression of transgenes. In this case, the promoter is inactive at room temperature; increasing the temperature to 37°C is the inducing stimulus.

These simple inducible promoters have several drawbacks. First, there is often significant expression even in the absence of the inducing signal and the level of induction is often low— perhaps 10-fold or less. Second, there are often toxic side effects. These may be due directly

to the inducing signal (e.g., zinc, high temperature) or they may be due to the induction of other, natural, genes that respond to the same signal. Third, the inducing signal may be taken up slowly and/or only penetrate some tissues of the organism. Some of these problems can be avoided by using foreign or artificially constructed promoters.

Bacterial repressors have been used to control transgenes in animals and plants. Both the LacI repressor and the TetR repressor have been used in this manner. For use in transgenic animals  the lac system must be modified as illustrated in Fig. 15.10. The LacI repressor is made by the lacI gene, which is modified by adding a Rous sarcoma virus (RSV) promoter to ensure expression in animal cells. Another animal virus promoter, from SV40 (simian virus 40), controls the transgene. In addition, a lacO operator site is inserted into this promoter. The LacI repressor binds to the operator site and prevents expression of the transgene via the SV40 promoter (see Fig. 15.10). When IPTG is added, the LacI protein binds the IPTG and is released from the operator site. Thus transgene expression is induced by IPTG. 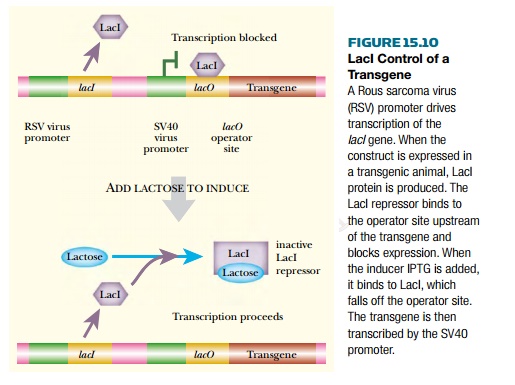 The tet system operates in a similar manner to the lac system. The tet operon confers resistance to the antibiotic tetracycline. (It is usually found as part of a transposon, e.g., the Tn10 transposon of E. coli.) The TetR repressor protein binds to an operator site and so prevents expression of the tetracycline resistance genes. When tetracycline is present, it binds to the TetR protein, which is therefore released from the DNA. Consequently, thetet operon is induced by tetracycline. The tet system may be used in higher organisms like the lac system. The transgene has a tetO operator site inserted into its promoter and will then be induced by tetracycline.

Both the lac and tet systems work well in eukaryotic cells. They both have low background expression and a high ratio of induction. In particular, thetet system may show up to 500-fold induction. One problem is the need for constant high-level expression of LacI or TetR protein. These bacterial DNA binding proteins may become toxic to eukaryotic cells at high levels.

The tet system has been modified to avoid the need for high levels of TetR protein. Fusing TetR protein to eukaryotic transcription factors can give hybrid activator proteins. For example, the VP16 activator protein from herpes simplex virus (HSV) has been linked to TetR. When the hybrid TetR-VP16 protein binds to DNA it recognizes the tetO operator sequence (Fig. 15.11). However, when bound it causes activation (not repression) because the VP16 domain activates transcription. Thus the TetR recognition sequence now functions as a positive regulatory site. When tetracycline is added, the TetR-VP16 protein is released from the DNA and the gene is no longer expressed. Here, then, addition of tetracycline prevents gene expression. This system can give as much as 100,000-fold induction and background expression when the gene is turned off is extremely low. 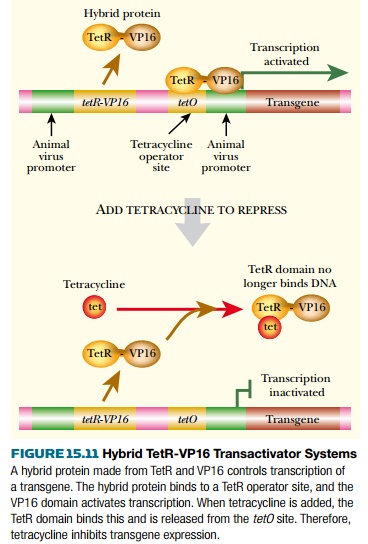 A further improvement is the use of a mutant TetR protein whose DNA binding behavior has been inverted. Hence it binds to DNA in the presence of tetracycline and is released in its absence. Consequently, hybrid activator proteins made using this version of TetR activate the target gene in the presence of tetracycline. This is known as the reverse tet transactivator system (Fig. 15.12). Plasmid and virus vectors have been constructed that allow all components of this system, including the cloned transgene, to be inserted into the animal together. 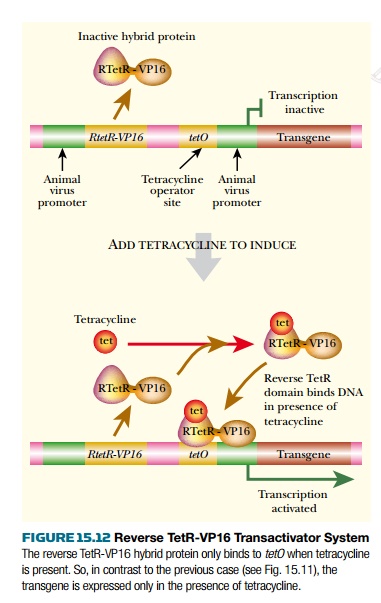 A problem with molecules such as tetracycline is that they often penetrate different tissues unequally. Steroid hormones are lipophilic and consequently penetrate cell membranes rapidly. Once inside the cell, steroids bind to receptor proteins, which in turn bind directly to DNA and regulate gene expression. Steroids are also eliminated within a few hours, and consequently they are convenient molecules for inducing transgenes. 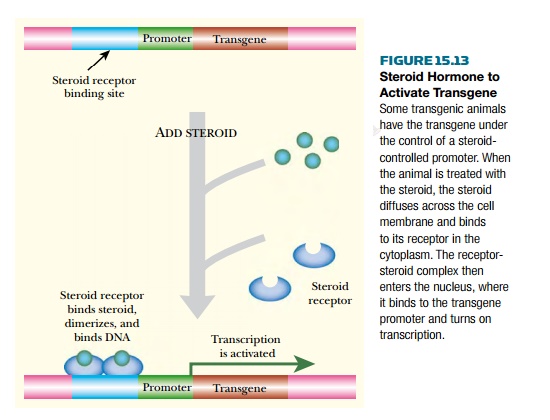 Here the issue is to avoid inducing other host genes that respond to steroids. One way to achieve this is to use a steroid not found naturally in the host animal. For example, the steroid ecdysone from insects may be used in transgenic mammals and, conversely, the mammalian glucocorticoid hormones may be used in transgenic insects or plants. Therefore the binding protein for the chosen hormone must also be supplied. A recognition sequence for this protein is placed in the upstream region of the target transgene (Fig. 15.13). The result is that the transgene is induced when the steroid is administered.

Altered and/or hybrid steroid receptors have been used for improved responses. One curious example is the use of a mutant version of the mammalian progesterone receptor. The mutant version can no longer bind progesterone, but still binds the antagonist RU486 (active component of the abortion pill). When RU486 is used as inducer, the concentration needed is 100-fold less than required for its action in abortion. This receptor can be used without any interference with endogenous steroids, and treatment with RU486 does not induce abortion in the transgenic animal.