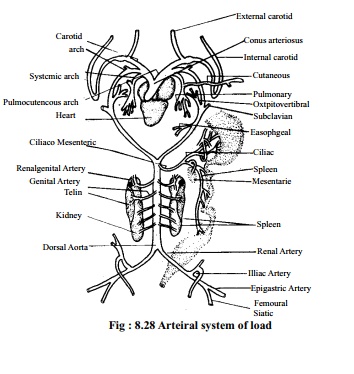 Venous system: The blood vessels which carry the deoxygenated blood fromvarious parts of the body to the heart are called veins. Veins originate from the capillaries. The only exception is the pulmonary vein. This vein carries oxygenated blood to the heart. The whole venous system of toad is generally divided into three main branches, such as:

A. Pulmonary Venous system: One pulmonary vein originates from each lung.The two pulmonary veins meet together and form one common pulmonary vein and finally it opens into. the left auricle. It is an exceptional vein which carries oxygenated blood from the lungs directly to the heart.

B. Systemic Venous system: Systemic venous system is formed by the veinswhich are originated from the capillaries carrying carbon-dioxide enriched blood to the heart directly. Three main vena cavae with their branches form the systemic venous system. The three vena cavae open in the three corners ofsinus venosus. Two from anterior part of the body and the other from the posterior part carry deoxygenated blood. Each anterior vena cava or pre-caval vein is formed by three main veins, such as, External Jugular, Innominateand Subclavian vein 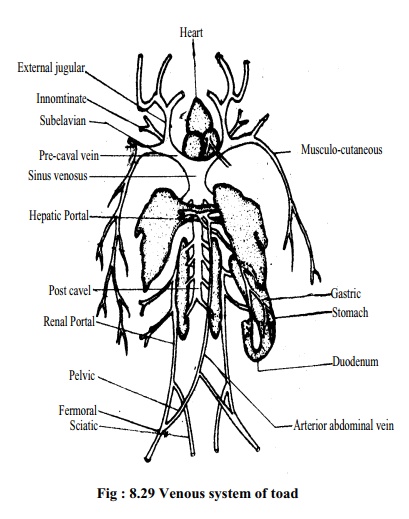 The two veins carrying deoxygenated blood from the tongue and face are called external jugular veins.

2. Innominate Vein: This veinis formed by the combination of two veins. It collects deoxygenated blood from the shoulder and corners of the jaw.

3. Subclavian Vein: This vein is  formed  bythe  combinationof two veins. Its function is to limbs, muscles and integument.

Genital Vein: Some finer veins coming from the testis of the male toad orovaries of the female toad meet with the two pairs of renal veins. These are known as "genital" veins. The function of the genital veins is to collect blood from the reproductive organs.

C. Portal system: There is a type of vein inthe body of the toad which originating from the capillaries of any organ instead of reaching the heart directly, again enters into other organs and terminates in the capillaries. These are called portal veins. The portal system is formed by the combination of such veins. In the body of toad there are two kinds of portal venous system such as, Hepatic Portal System and Renal Portal System

A. Hepatic Portal System: Some veinscoming from the stomach, intestine, pancreas, spleen and hind limb meet together and form this system. The two pelvic veins from the inner side of femoral vein of each side of the hind limbs of a toad meet together and form the anterior abdominal vein. This vein approaches the liver. When nearing the liver, veins coming from various parts of the alimentary canal, meets this vein. These joined veins are called hepatic portal veins. Hepatic portal veins then come in close contact of the liver and proceed transversely. The hepatic portal vein then divides into two branches and enters into two parts of the liver. There they divide into capillaries. 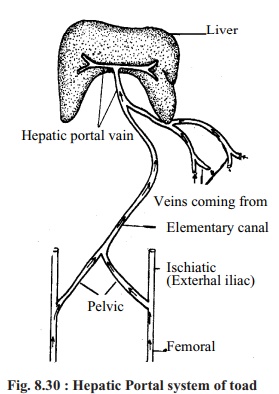 B. Renal Portal System: The femoral vein coming from the hind limb and thesciatic vein coming from the pelvic region meet together and approach towards the kidneys. This united vein is called renal portal vein. Before entering the kidney some other smaller veins also join. These are called dorsolumbar veins. Later the renal portal vein enters the kidney and divides into capillaries. Thefunction of this system is to eliminate excretory materials from the blood collected by the kidneys. 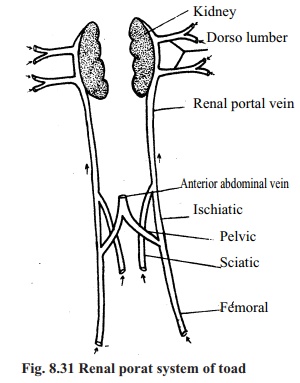 Differences between hepatic portal and renal portal system and its significance are given below : 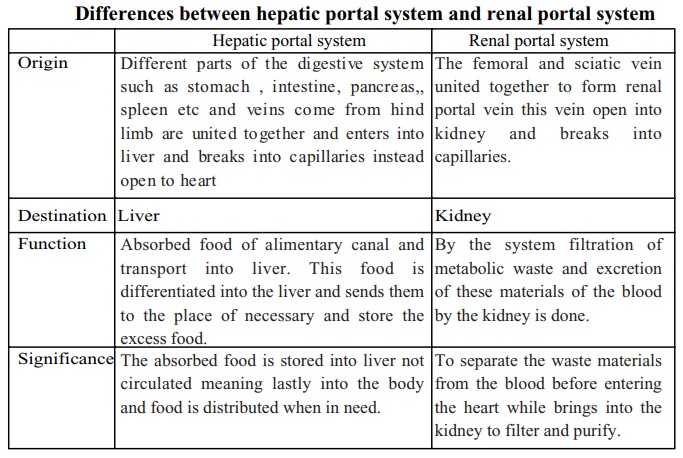