Toad: Axial skeleton and its functions

Skull : The part of the axial skeleton which forms the frame of the head andprotects the brain is called skull. It consists of various small and large bones. A skull has different parts, such as cranium, upper jaw, lower jaw, nasal, capsule eye cavity, ear cavity, hyoid apparatus etc.

The small cavity at the middle of the head surrounded by small bones, in which the brain lies, is called the cranium. At the posterior part of the cranium there is a big aperture called foramen magnum. Through this opening the spinal cord comes out from the brain and enters the vertebral column. At the floor of the buccal cavity of the toad, there lies a plate like structure made of cartilage called hyoid apparatus. Upper and lower jaws surround the mouth aperture. The upper jaw is firmly attached with the cranium but the lower jaw can move up and down. In the wall of the cranium there are several paired pores. Through these pores the cranial nerves from the brain comes out.

Functions of skeleton : The skeleton does the following functions:

a. It gives structure and firmness to the body- The skeleton forms the hardstructure of the body and gives it a definite shape.

b. It protects soft organs - The skeleton protects the important soft organs ofthe body such as, heart, lungs, brain, etc. 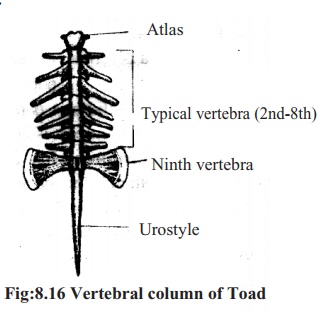 e. It carries the weight of the body and assists in locomotion-The coordinationof skeleton an skeletal muscles helps in carrying the weight and movement of the body.