The appendicular skeleton of toad is divided into tworegions, one is Girdle region and the other is Limb region.

Pectoral girdle: The pectoral girdle almost encircles the anterior part of thetrunk region of the body. It occupies almost the whole interior region of the body excepting the midline of the dorsal side. This part is covered with skin and muscle. The pectoral girdle of toad can be divided into two equal or symmetrical parts. Each symmetrical part is formed with the combination of bones and cartilages. This girdle remains attached with the backbones by muscles as a result of which by keeping it in a proper place, completion of different types of work becomes very easy.

2. It protects the soft organs of the body such as lungs, heart etc.

We have known earlier that the pectoral girdle can be divided into two similar parts. Each part consists of the following components:

a. Supra-scapula: It is a wide, plate like cartilage. One end of the supra -scapula is joined with the scapula and the other end remains free. The free end is attached with the backbone by muscles and ligaments.

b. Scapula: Scapula is a narrow hard long bone. One end of this bone isattached with the supra-scapula and the other with the clavicle and coracoid. 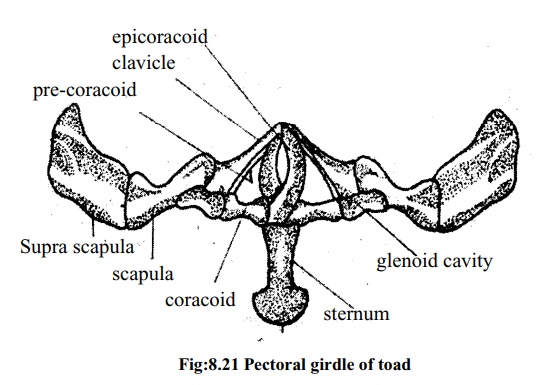 d. Coracoid: This bone is hard bulky and thick. One end of the coracoid, whichis attached with the scapula, forms the glenoid cavity and the other end is joined with the precoracoid.

e. Precoracoid: It is an axe-like part formed from a long and narrow cartilage.Precoracoid is situated at the bottom and side of the clavicle and remains enclosed by the clavicle.

f. Epicoracoid: It is a bent cartilage whose one end is joined with the coracoidand the other end with the precoracoid.

g. Glenoid cavity: In every half of the pectoral girdle there is a cavity inbetween the junction of scapula, coracoid and clavicle. This cavity is known as glenoid cavity.

h. Sternum: At the ventral side of the body there is an expanded part made ofcartilage behind the coracoid of the two halves of the pectoral girdle, it is called the sternum. The posterior end of the sternum is rounded in toad.

The fore limb of toad is formed by the combination of some small and large, bones. The description of these bones is given below: 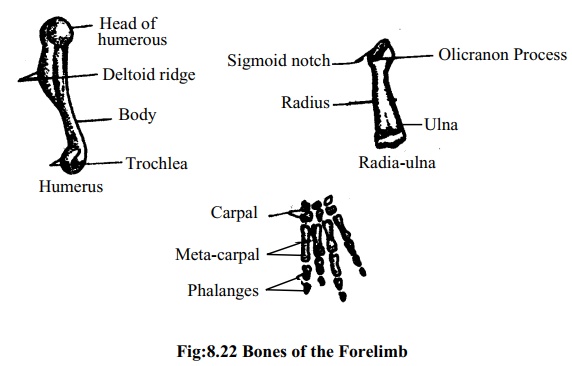 a. Humerus: The upper most bone of the fore limb is called the humerus. It islong and slightly bended. Both ends of the bone are stout. A ridge called the deltoid ridge is found on the upper of the humerus. The head of the anterior part of the bone is round. With this head, the humerus remains attached with the glenoid cavity of the pectoral girdle. At the other ends of the humerus, lies a rounded bone mass. It is known as trochlear process. It helps in attaching itself with the next bone.

b. Radia-ulna: The middle bone of the fore limb of toad is the radia-ulna.Actually this bone is formed by fusion of two bones the radius and the ulna. At the junction of the two bones there lies a longitudinal mark. The bone in the inner side is known as radius and the one located outer side is known as the ulna. In front of this bone there is a carve known as sigmoid notch. The trochlear of humerus is jointed there. Near the notch there is a projection called olecranon process.

c. Carpal: The carpal is formed by the six small bones of the wrist. With threebones in each row, a total of six bones are arranged in two rows. The posterior end of radia-ulna is joined with the carpals.

d. Metacarpal: The palm is formed with four narrow    bones. These bonesare called metacarpals. They bear the weight of the palm of forelimb and remain attached with the phalanges. 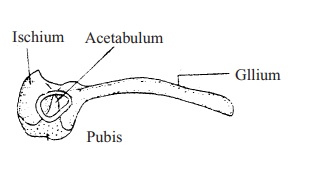 e. Phalanges: In the forelimbs of toad, there are four fingers. The finger-bones are called phalanges. There are two phalanges on the first and second. Fingers and three on the third and fourth fingers.

a)       IIium : The longest bone of pelvic girdle which isslightly bent and rod shaped is called ilium. Its front end remains attached with the ninth vertebra.

b)       Ischium: It is a semi lunar bone situated between theilium and pubis.

c)   Pubis: It is a triangular cartilage situated between iliumand ischium.

d)       Acetabulum: A cavity situated at the junction of thethree bones of the pelvic girdle is called the acetabulum. With the acetabulum the head of the femur of the hind limb remains attached.

a. Femur: The first solid bone of hind limb is femur. Thetwo ends of the femur are swollen and the middle portion is bent. The rounded part of the anterior end remains attached with the acetabulum.

b. Tibia-fibula : The knee bone is called tibia-fibuala. Thisbone is formed by the fusion of two. bones named tibia and fibula. The tibia is situated in the inner side of the body and the fibula is in the outer side. There is a ridge at the junction of the two bones, known as cnemial crest.

d. Metatarsal: The sole of the foot of toad is formed of five narrow stick-like bones. These bones remain attached with the phalanges at the lower portion.

e. Phalanges: In the hind limb of toad there are five fingers. There are two phalanges in the first and second fingers, three in the third and fifth fingers  and four in the fourth finger. Besides, towards the inner side of the hind limb there is a bony extension named calcar.