Round Worm: External morphology and Habitat

Roundworm is found throughout the world. Ascaris lumbricoides is generally known as the roundworm.

Roundworm is found throughout the world. Ascaris lumbricoides is generally known as the roundworm. They live as an endoparasite in the intestine of man. Compared to other worms the roundworms are bigger in size and tubular in form, like an earthworm. Eggs of the worm enter the human body with air, water, green fruits and vegetables. Man is the only host of the round worms.

Habitat: Roundworm is widespread throughout the world. Its outbreak is seenin Bangladesh, India, China, Korea and Philippine etc.

External morphology: A live roundworm is generally dull white in colour. Itlooks tubular like the earthworm. In the body of roundworm, we can see four longitudinal lines, one dorsal, one ventral and two laterals in position. In length, the female roundworm can be up to 20-25 cm while the male is up to 15-20 cm. Mouth is situated at the anterior end of the body. There are three lips on the mouth. Of these one is on the upper side and the other two on the two sides of the mouth cavity. To discharge excretory materials, there is a cloacal aperture or anus on the lower side of the posterior end of the body. Reproductive cells are discharged through this cloacal aperture in male worm. Two spine-like structures come out from the cloacal aperture, of the male worm. These are called penial setae. The cloacal and genital apertures are separate for female worm. The genital aperture of the female is situated on the ventral side of the anterior end of the body. 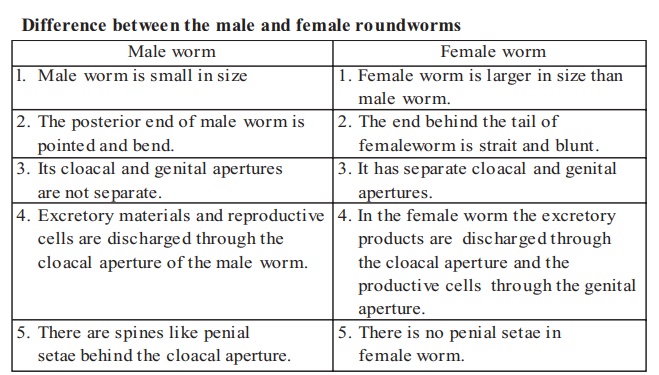