Circulatory system: To sustain life toad requires food and oxygen. Body cellscannot directly take the ingested food substances and oxygen from air. So digested food substances and oxygen from air are required to reach each cell. Similarly it is required to expel carbon-dioxide and other wastes from the body formed as a result of metabolism. For this reason an efficient transport system is build in the body of the animal. Blood and lymph work as internal transport media. Blood and lymph supplies oxygen, hormone and digested food to the cells and help in egestion of excretory products of cells. This process is called circulation.

The circulatory system is formed of blood, heart, blood vessels and lymph vessels.

Blood is a kind of liquid connective tissue. The blood of toad is red. It isproduced from the mesoderm cell layer of the embryo. Blood is divided into two main components, Plasma and Blood corpuscles.

Plasma : Plasma is the main component of blood. It is trasparent. slightlyalkaline substance and light yellow coloured. Besides water in the plasma, food, hormone, mineral salt, carbon-dioxide, fibrinogen and various gaseous components remain in dissolved condition. In plasma the blood corpuscles remain suspended. The primary function of the plasma is to transpot the blood corpuscles and other substances to different parts of the body. 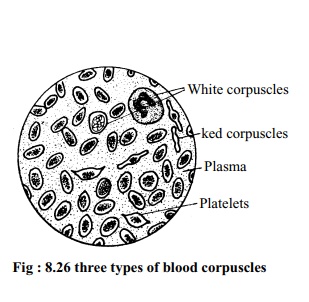 Blood corpuscles are mainly of three types, such as:

1. Red blood corpuscle : The red bloodcorpuscle is oval, biconvex and nucleated. The reddish colour of blood is due to the presence of haemoglobin. Haemoglobin is a kind of iron mixed protein, The amount

of this corpuscle is highest in blood. Red blood corpuscles are produced in bone marrow, liver and spleen. Haemoglobin easily mixes with oxygen to form oxyhaemoglobin. In a similar way oxyhaemoglobin being reduced transforms into haemoglobin and the red blood cell supplies oxygen to the cells.

3. Platelets: Among the blood cells the smallest corpuscles are the platelets.These cells are spindle shape and are nucleated. These are originated in the bone marrow. Platelets help in the clotting of blood.

1.   Supply of essence of food and water: Plasma supplies the digested foodmaterials and water to various parts of the body.

2.   Supply of oxygen: Blood supplies oxygen to each of the living cell of thebody.

4.   Transportation of hormone: Blood carries the hormone and supplies it tothe places where necessary.

6.  Destruction of germs: The white blood corpuscles help the body to keep fitby destroying the germs if they enter the body.

7.  Clotting of blood: If any part of the body is injured or if the blood vessel isruptured, platelets stop the bleeding by clotting the blood.

Heart is the most important organ of circulatory system. It is a sort ofpump in the body of toad. This organ is situated in between the lungs and remains covered by the membrane named pericardium. The wall of the heart is quite thick and three layered Epicardium, Myocardium, andEndocardium.

The outer layer of the heart is epicardium. The middle layer is myocardium which is made of cardiac muscles and quite thick. The inner layer is known as endocardium.

The heart of a toad is divided into three main chambers: Two auricles and one ventricle. Besides there are two sub chambers named sinus venosus and conus arteriosus.

Auricle: The two upper chambers of the heart are named auricles. The twoauricles are divided into right and left parts by a septum. Right auricle is bigger than the left. By a common auriculo ventricular aperture the right and left auricles open into the ventricle.

Sinus venosus: The triangular chamber situated on the dorsal side of auricle isnamed sinus venosus. Two anterior vena cavae and one posterior vena cava enter into it. Through the aperture named sinu-auricular aperture the sinus venosus opens into the right auricle. At the opening of this aperture a pair of one way valves is present.

Conus arteriosus: Placed obliquely form the right end of the ventricle of theheart up to the left auricle the chamber is named conus arteriosus. The two parts of conus arteriosus in front of the auricle named called truncus arteriosus or aorta. From here comes out the three main arteries. There. is a spiral shaped valve inside the conus called spiral valve. This valve divides the conus cavity into right and left parts.