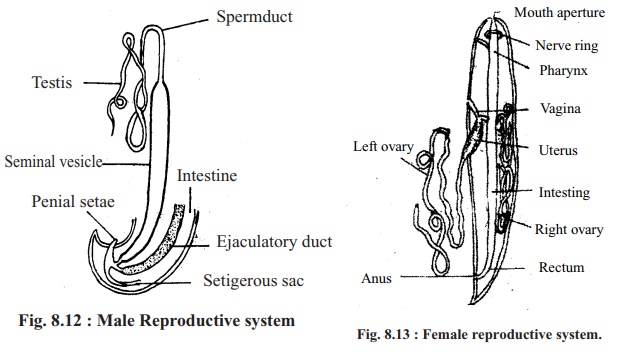 The round worm is a unisexual animal. Generally themale worm is smaller in size than the female and the posterior part of its body is bent.

Reproductive System : The round worm is a unisexual animal. Generally themale worm is smaller in size than the female and the posterior part of its body is bent.

Male Reproductive System : The malereproductive system consists of a testis, sperm duct, seminal vesicle and an ejaculatory duct. The testis is formed like a coil and occupies a greater portion of the body. The sperm duct is located behind and the bulky posterior part is the seminal vesicle. It later opens into cloacal aperture. They have a pair of penial setae. Male round worm discharges sperms through the cloacal aperture. 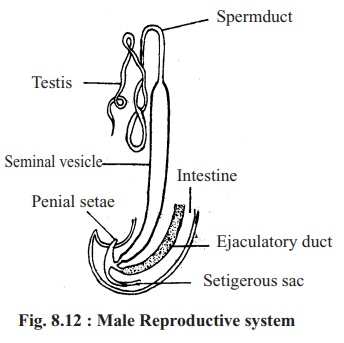 Female Reproductive System : TheFemale round worm is larger in size than the male. The female reproductive system consists of two ovaries, two uteri and one vagina. These organs, are situated in the posterior half of the body of the worm. The ovaries are coiled and narrow. Eggs are produced at the. posterior part of the ovary. The oviducts are connected with the ovary. The eggs produced in the ovaries pass to these ducts. A part of the oviduct enlarges to form a seminal receptacle. Here the sperms are stored. The oviduct meets the uterus. The two uteri uniting together form the tubular vagina. The vagina opens outside. through the female genital aperture. 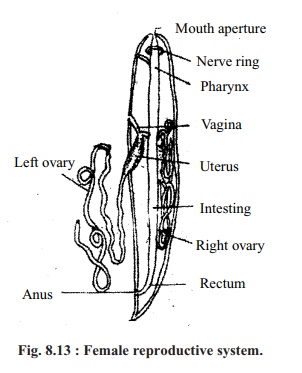 Life cycle : The ovum and sperms of the round worm meet together at theupper side of the uterus. After fertilization the zygote or fertilized egg is covered by a wall made of chitin. The eggs of roundworm are very small and elongated. Along with the faeces of the host these eggs come outside of the host body. Embryo formation begins inside the fertilized egg when it remains within the shell. The primary larval stage of the roundworm is called Rhabditiform larva.

Infection : No intermediate host is required for the infection of round worm.Eggs enter directly into the body of the new host along with contaminated air, food and drinks.

Transformation to adulthood : After the entry of the egg in the intestine ofthe host, the shell is dissolved by the intestinal juice of the host and the larva is freed from the shell. They pierce the intestinal epithelium and enter into the lymphatic vessels or the blood capillaries. They travel to various organs along with the blood circulation: At this condition, for sometime, the larvae are entrapped in the lungs. Ascending the respiratory tube the larvae reach to the pharynx. Due to their presence the throat of the host irritates and this may cause coughing. Along with cough the larvae comes up to the throat. They again reach the intestine if one swallows the cough. The larvae once again change their shell in the intestine. Here ends their migratory life. When inside the intestine, they are nutrited by taking digested food juice from the host. Within a few days the larva changes into a full worm. In Bangladesh the incidence of infection of this worm is very high. Most of the children of our country suffer from this infection. A single host may contain 100 to 400 worms.