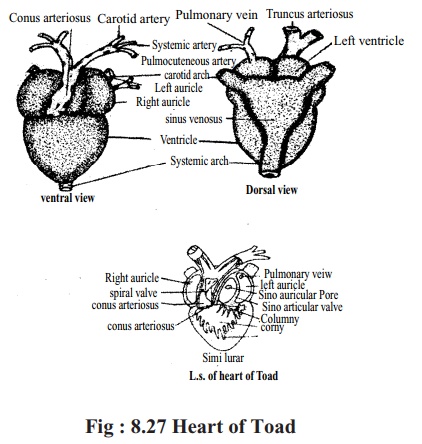 The tubulesthrough which the blood is circulated inside the body are called blood carrying vessels or blood vessels. These vessels are directly orindirectly connected with the heart. The blood vessels are of three types, Artery, Vein and Capillary.

Blood vessels: The tubulesthrough which the blood is circulated inside the body are called blood carrying vessels or blood vessels. These vessels are directly orindirectly connected with the heart. The blood vessels are of three types, Artery, Vein and Capillary. 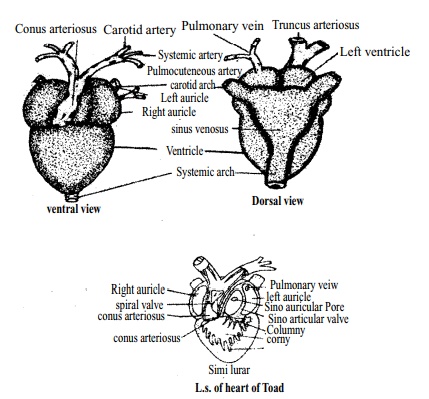 Artery: The vessels whichcarry oxygenated blood away from the heart to various organs of the body are called arteries.

Capillary: The aorta originates from the heart and then branches intoextremely narrow arteries or arterioles. These branches further divide many times and form fine networks. Later these fine nets joining together form the vein. Arteries and veins are connected by those fine networks. These nets which connect the arteries and veins are called capillaries. The wall of the capillary is very thin. Its wall is formed by one layered thin epithelial cells, as a result, exchange can easily occur between the blood inside its cavity and the food juice and waste substance inside the cell.

Vein: The vessels which carry blood from various organs of the body towardthe heart are called veins. Veins generally carry deoxygenated or carbondioxide enriched blood. But the pulmonary vein carries oxygenated blood from the lung to the heart. Veins originate from the capillaries. The main difference of artery and vein are given below on the table.

Arterial system: We have known earlier that the blood vessels which supplyblood to various organs of the body from the heart are called the arteries Arteries, arterioles and capillaries together form the arterial system.

Carotid arch : Arising from the truncus arteriosus this artery has gone upbeing divided into two parts. The upper and lower arteries are respectively called external carotid and internal carotid. These arteries supply blood to the buccal cavity tongue and outer side of the skull and brain.

Systemic Arch or Aorta: A systemic aorta arising from the middle of each ofthe two sides of the truncus arteriosus meet together behind the heart surrounding the two sides of the left and right lungs. This joined artery is called the dorsal aorta. From each systemic aorta arise some branched arteries such as Laryngeal artery, Occipito vertebral artery and Subclavian artery.

1.    Laryngeal artery: This artery is the first branch of systemic arch. Beingdivided into branches and sub-branches it supplies blood to the vocal sac.

2.    Occipito-Vertebral artery: This artery originates from the middle of thesystemic arch and goes toward the dorsal side. The occipito-vertebral artery being divided into branches and sub-branches supplies blood to the pharynx, hind part of brain, back bone and spinal cord.

1. Coeliaco-mesenteric artery: From very near to the origin of the dorsalaorta, a branched artery comes out and after proceeding to some distance it becomes divided into two portions. The first one is called coeliac and the second one mesenteric. Coeliac supplies blood to the stomach, liver, pancreas and gall bladder. The mesenteric artery supplies blood to the spleen and intestine.

2. Renal artery: Four to five pairs ofarteries enter the kidneys while the dorsal aorta passes through the middle region of the kidneys. These arteries are called renal atreries and they supply blood to the kidneys. 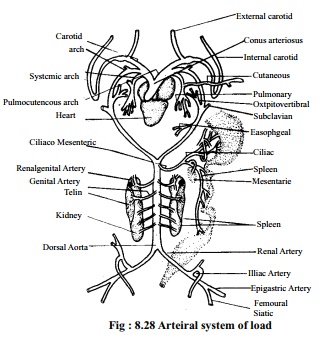 3. Genital artery: Arising from thebranches of the renal arteries some branches enter the genital organ. These are named genital arteries. They supply blood to the reproductive system.

At the distal end of the trunk the dorsal aorta divides into two branches. These are named respectively the right and left iliac.