Toad: Vertebral column and its functions

The vertebral column is extended from back of the head till the posterior end of the body of the toad. It is also called the backbone.

Atlas: The first vertebra of the vertebral column is called the atlas. It is connected with the skull in front and the second vertebra (at the posterior). The atlas looks like a ring. It has no transverse process, neural spine and prezygapophysis. Its neural canal is comparatively bigger in size. Atlas meets the next vertebra with the help of post zygapophysis. 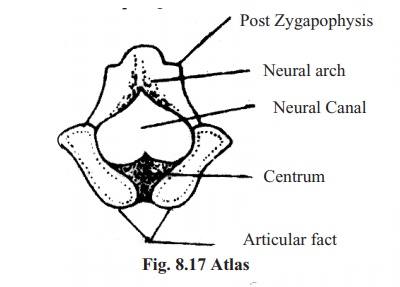 a. Centrum: This solid part is present in the middle of the ventral surface ofevery vertebra. Its front part is concave and the back part is convex. This type of centrum is called procoelus. Due to this structure, the vertebrae can easily be attached to both in front and at the back.

b. Neural canal: The cavity surrounded by the neural arch is called neuralcanal. The spinal cord Passes backward through this.

c. Neural arch: The tip two bones generating from the two sides of the dorsalsurface of the centrum forms a circular ring. This ring is called the neural arch, which surrounds the spinal cord.

d. Neural spine: Two neural arches joining together form a spine like process.This spine like part is the neural spine, muscles attaching with it gives the body firmness.

f. Pre-zygapophysis: The up looking spoon like thick fold that comes out fromthe front of every neural arch is called pre-zygapophysis. It gives the body firmness by attaching itself with the two post-zygapophysis of the vertebra in front.

g. Postzygapophysis: The two down looking spoon like folds that come outfrom the back of every neural arch are called posti-zygapophyss. They remain attached with the pre-zygapophyses of the posterior vertebra. As a result the attachment of the vertebrae becomes firm. 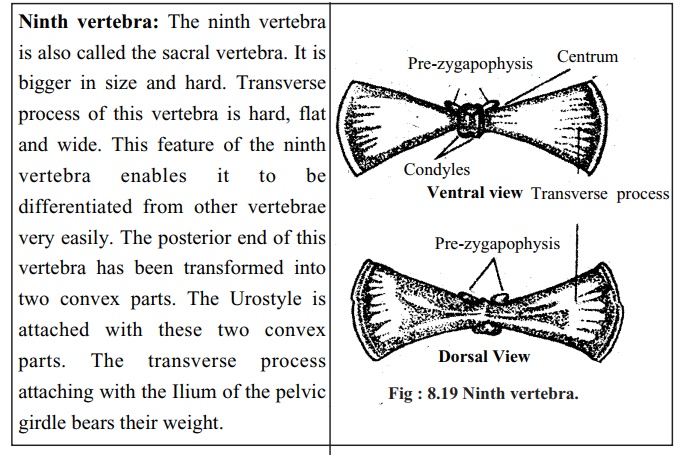 Urostyle: Urostyle is a long rod shaped bone situated at the back of the ninthvertebra. Several vertebrae are fused together to form this structure. It is situated at the end of the vertebral column in between the two iliums. On the dorsal side of this bone there is a knife-like ridge called neural crest, and the bone is gradually narrowed towards the back. The concave part of the front end of the urostyle remains attached with the convex part of the ninth vertebra. There is very fine neural canal between this concave facet and neural crest.

1.        The vertebral column by giving a definite shape forms to the frame of the body.

2.   It surrounds the spinal cord and protects it.

3.        Being attached with the pelvic girdle it assists in bearing the weight of the body and its movement.

4.   Being attached with the transverse process and neural arches of the muscles, vertebrate make the movement smoother.