To understand the Political thought of Thomas Hobbes 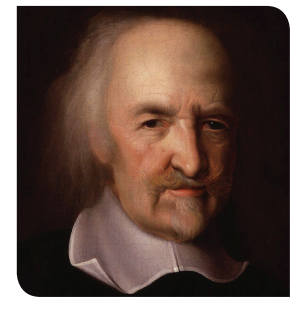 Thomas Hobbes the sixteenth century English Philosopher who lived during the scientific revolution was the first to attempt a modern theory of society. He based his views on moral relativism with a highly pessimistic view of the state of nature – a war of all against all. Thomas Hobbes was born prematurely in Malmesbury on 5 April 1588, when his mother was told that the Spanish Armada was spotted off the coast of England. Hobbes grew in the house of his well -to- do uncle after his father abandoned his family. Hobbes began his schooling early and entered the Magdalen college in Oxford. Upon his graduation at the age of nineteen he became connected with the Cavendish family where he served as a tutor to William Cavendish. Although Hobbes showed little interest on the elements of philosophy, he began to study the classics with earnest after he went on a tour with William Cavendish in the European continent. He developed an interest in the movement of history and on the fates of nations and empires. In the year 1629, he  translated Thucydides’ History of the Peloponnesian War and published it.

Among Hobbes’ many works, De Cive and the Leviathan were the most important.

Hobbes’ Leviathan which is his most mature and exciting work attempts to demonstrate that the Galilean physics provides a model of human psychology which on turn lays the foundation for modern politics. His conception of human nature, the state of nature, the social contract and his ideas on sovereignty have captured the interest of all who read his political philosophy. In the following sections an attempt to understand these important works of Hobbes will be examined.

At most times, the Leviathan of Hobbes is taken as the starting point and begins with a coherent theory of ‘Man’, as a pre requisite to an understanding of politics. Very often political scientists use the term ‘ Hobbesian’ which probably could denote a very pessimistic view of man as essentially, anti -social, selfish, brutish and power lusting. If we agree with Hobbes’ assumptions that man existed before there was any society or state, then, man would be concerned with doing only what will satisfy his need and wishes.

I put for a general inclination of all mankind, a perpetual and restless desire of power after power that ceaseth only in death. – Hobbes

In Hobbes’ words human beings are driven by their passions and use their intellectual capacity simply as a means to determine what will bring them the greatest pleasure or the least pain. Hobbes further adds that the object of man’s desire is not to enjoy only once, and for one instant only, but to assure forever the way of his future desire. Hobbes is careful to also state that different people desire different forms of pleasure but there is one desire which is common in man – Power. Given that all are pleasure seekers, it must logically follow logically that all are power seekers. Hobbes thus regards human nature as utterly self-interested and self-regarding. Hence innately anti-social.

Hobbes in his theory of the state of nature provides a corollary method of understanding human behaviour..In the state of nature Hobbes argues, that it a condition of absolute liberty and equality. Absolute liberty since there would be no laws to constrain individuals and thus would have a right to everything; absolute equality because human beings have roughly equivalent physical and intellectual capabilities. Hobbes argues that in such a condition where everyone has a right to everything and all have equal capabilities in exercising their rights, all are subject to attacks from all. The state of nature is thus a state of war where survival remains the ultimate motive for human beings to acquire power. Thus in the state of nature everyone lives in constant fear of everyone else. It is thus by nature that human beings are by nature antisocial power seekers.

Hobbes’ view of human nature has a profound impact on his political theory. Knowing the true nature of human beings, Hobbes puts forward a scientific theory of politics – the ‘Social Contract’. The fundamental idea of the social contract is quite simple: The state is the result of a contract between human beings in which the scope and extent of the powers of the government are to be determined by an analysis of the terms of the contract. The state is created by mutual agreement or the consent of its members. As a result government is legitimate if it corresponds to what people have consented to.

“To do unto others before they do unto you” – Hobbes

This is a very modern notion of the modern secular state which is contrary to medieval thought where the secular government exists by divine sanction. Such an idea was still employed by the Royalists who argued that the monarch ruled by divine right. The consent-contract flatly rejected this idea and on the contrary claimed that the government is legitimate only to the extent that people have consented to. The importance of Hobbes theory of social contract is that he believes that it is strictly a logical and scientific analysis of the state. He argues that human beings would consent only to that which rationally accords to their needs and desires.

v  Fear and liberty are consistent.

v  Liberty and necessity are consistent.

v  Submission consists of both our obligation and our liberty.

v  Other liberties depend on the silence of the law