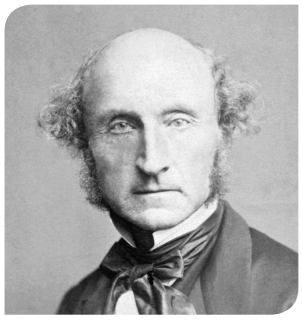 John Stuart Mill was born on 20 May 1806 in Bentonville, a northern suburb of London to Harriet Barrow and James Mill, a Scotsman who was educated at Edinburgh University. The development of John Stuart Mill as a social and political thinker can be divided into three specific periods. The first period represents the training that he received from his childhood under both his father, James Mill and Jeremy Bentham. The second period marks his recovery from his mental crisis which started in his early twenties, with the termination and dissolution of the philosophic radicals as a distinct party towards the end of the 1830s. It was at this period that Mill refashioned his thinking under a variety of intellectual and emotional influences. The final period which extends to over thirty years of his career, marks the time in which he published his major works that included, A System of Logic, Principles of Political Economy, On Liberty and Considerations on Representative Government.

On Liberty (1859) brought Mill enduring fame, and predicted that among all his works, this was destined to survive the longest and is has. The transformation of society from aristocratic to democratic forms of organization brought with it both advantages and disadvantages. It meant rule by social masses that would be more powerful, uniform and omnipresent than the rulers of previous eras. Mill held that, the dominance of the majority carried with it more risks that from a monarch that had the capacity to place restrictions over the freedoms of individuals, which could be legislatively enacted. Informal mechanisms of social pressure and expectation could in democratic societies could be all-controlling. Mill expressed that such powers could have the capacity of stifling conformism in thought, character and action. In was in this context that On Liberty was written. The aims of this work is written in the first chapter which asserts one simple principle. This principle states that “the sole end for which mankind are warranted, individually or collectively, in interfering with the liberty of action of any of their number, is self-protection” (Liberty: XVIII 223). Thus, the practical philosophy of this argument by Mill is primarily utilitarian.

In his ‘On Liberty’ Mill puts forward different strategies to argue for freedom of thought and discussion, character, and action. Freedom of thought and discussion are discussed in chapter two of On Liberty, where arguments against the control of expression are explained. Chapter three of On Liberty, puts forward argument in favour of freedom of Character (individuality) where such arguments are two pronged. On the one hand Mill argues for freedom of space for individuals which individuals should have to develop their own character while on the other, he maintains that it is best for society too. “Human nature is not a machine to be built after a model, and set to do exactly the work prescribed for it, but a tree, which requires to grow and develop itself on all sides, according to the tendency of the inward forces which make it a living thing” (Liberty, XVIII: 263). Mill was of the opinion that mass society is self-repressive in nature which would lead to the sapping of human energy and potential. The Victorian society he claimed was governed by an ethos of propriety based on Christian self -denial while in contrast Mill encourages the Greek model of self-development. It is important for society to create conditions where individuals can develop their own ways of living. This will enable variety and diversity of character and culture which will become the engine of productive tension that will drive a nation forward. Mill’s insistence throughout On Liberty, sought to preserve the individual’s freedom against the possibility of legislative or state coercion and also from the deceptive forms of social coercion.

In 1861 Mill’s Considerations on Representative Government was published which contains his views on politics. Mill was a convinced democrat, however, this work reveals his disappointment, doubts, and difficulties about self- government. His view is paradoxical in nature where he views that the majority ought to rule but minority rule was probably right. He argued that majority has power but the minority has wisdom. Mill in this work expresses the dangers posed by the tyranny of the majority undertook to provide the criterion for good government. He concluded that ideally the best form of government was one that was representative where the sovereignty is vested in the entire aggregate of the community, every citizen who not only have the right to at least occasionally be called on to take an actual part in the government by the personal discharge of certain public function, local or general.

John Stuart Mill occupies a very important place in the history of political thought which was widespread in the nineteenth century. His works emphasized the importance of human nature for the proper study and understanding of the state. He developed his own philosophy of franchise. Mill states that casting one’s vote is as necessary for the political animal as is the air that he or she breathes. No other political thinker has been as emphatic as Mill in the conception of voting. The influences that utilitarianism had on Mill also were important in the formulation of his ideas on the principle of economy and that of representative government where the freedom of the individual to develop his capabilities should be never interfered with. On each of these subjects Mill was often provocative that no student of the discipline can afford to ignore.