To understand the Political thought of John Locke 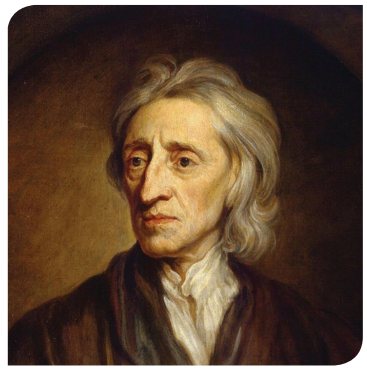 John Locke, the father of philosophical liberalism, was born on 29 August, 1632 at Wrington, Somersetshire, United Kingdom. He spent his childhood at Pensford, near BristolHis acquaintance with William, the Prince of Orange, and his ascendency to the English throne after the Glorious Revolution of 1688, brought Locke back to London. Locke was made the Commissioner for Appeals by William in 1689. The unfavourable political climate induced him to resign again and led to his settlement at Essex. He ended his public life with his last assignment as the Commissioner on the Board of Tea.

Locke’s central ideas can be discussed as follows:

Locke’s comprehension of the human nature is reflected in his “Essay on Human Understanding”. Unlike Hobbes, Locke does not subscribe to a pessimistic view of human nature. He identifies reason as the factor which shapes a rational human being. He also acknowledges reason as the foundation of individual and social life. Humans were social, rational, decent, mentally stable and capable of self-rule. Lockean view also upholds the natural state of equality for individuals. To him, humans are entitled to natural liberty. It is qualified as an inherent privilege to be free from any superior element but to be subversive towards the “dictate of the nature”. He also reaches a consensus on the fact that individuals are prone to some degrees of discrepancies in terms of intelligence, strength and their skills. Nevertheless, his reliance on similarities among individuals were outweighing the differences. Locke is also particular in reflecting the utilitarian trait of humans. Following the line of Bentham, Locke says, humans seek to strike a balance of pleasure over pain. It is this notion of pleasure or utility which forms the basis of his covenant.

The Locke an contemplation on the state of nature can be found in his “Second Treatise”. In contrast to the Hobbesian state of nature,Locke postulates a peaceful condition by virtue of the social instinct of humans. As dictated by the canons of natural law, his state of nature is based on perfect freedom. Moreover, the phase is also characterised by equality defined in terms of reciprocal power and jurisdiction. In his own words, “state of nature is a state of peace, goodwill, mutual assistance and preservation”. In short, Lockeunderscores the optimistic nature of human beings.

Natural law is considered to be the source of both rights and duties. Humans derive their rights from the domain of natural law and it expects them to respect the ordained rights on a mutual basis for safeguarding the same. Locke goes to the extent of denoting natural law as the moral law enacted by God, which is sensible through reason. It would not be wrong to refer his state of nature as “an anarchist’s paradise”.

Finally, Locke identifies the three fundamental demerits which threatened the balance of state of nature. Firstly, the absence of a legal framework. Secondly, the lack of a “known and impartial judge”. Thirdly, the requirement of an executive agency for the enforcement of decisions. Hence, the phenomenon of state was the means of liberation from this malady. Besides, it is worthwhile to keep in mind that the Locke an state of nature is inconsistent with facts. It rests on a fictional premise unsupported by any historical justification.

Social contract is configured as an instrument of admission to the civil society. The Lockean view proposes two contracts. The first one establishes the civil society and the second one calls for the constitution of government. He also recognises consent as the bedrock of the contract. To him, no individual can be admitted into this commonwealth without his/her own consent. Locke speaks of two kinds of consent: 1) formal or active consent, which is irrevocable in nature and 2) implied or tacit consent, which sanctions the departure of the stakeholders from the ‘trust’ and initiate a new order. Locke prefers the former as far as his version of contract is concerned, making it clear that there is no return to the state of nature. Another striking attribute of the Locke’s contract is that individuals do not surrender their rights which they enjoyed in the state of nature. Submission of the rights would defeat the purpose of the contract itself as the state is being raised as the guarantor and protector of rights. Therefore, the contract is synonymous to a “charter of liberty” than a license for subjugation. The Locke an vision on social pact also authorises the option for revolution against a tyrannous system of governance. This measure is included in order to reaffirm the role of the state as the guardian of the natural rights of individuals. Furthermore, Locke leaves the decision on revolution to the legislature with a focus on the principle of majoritarianism and consent.

On the question of the nature of authority, he outlines the notion of limited-sovereignty. Absolute sovereignty is against his construct of civil society. Locke was also not hesitant to offer an alternative blueprint on the separation of powers. According to him, the powers of the government were separated among three organs. Firstly, the legislature, which he refers as the “supreme power of the commonwealth”. Secondly, the executive, which also includes the judicial powers. Thirdly, the federative, which implies the power of external relations of a state. Locke was also tolerant towards the idea of a single-ruler which sanctions the concentration of all powers in one hand, provided that it is an outcome of the consent of the majority.

“Government has no other end, but the preservation of property”. -John Locke

John Locke, by virtue of his scientific temper and rationality, finds a significant place in the Western Political Thought. Being an individualist by conviction, he believed that humans are the makers of their own destiny. His works were a great source of impetus and inspiration for thinkers like Voltaire, Diderot and Rousseau, and even for the French Revolution. According to Parrington, Locke’s Two Treatises on Government “became the textbook of American Revolution”. In the words of Prof. Laski, “Hobbes worked with an impossible psychology and sought no more than the prescription against disorder. Burke wrote rather a textbook for the cautious administrator than a guide for the liberal statesman. But Locke saw that the main problem of the state is the conquest of freedom and it was for its definition in terms of individual good that he above all strove”.

Understand the meaning of separation of powers and examine how it functions in various countries.