To understand the Political thought of Jean-Jacques Rousseau

To know about Jean-Jacques Rousseau’s views on Human Nature, Theory of General Will, Sovereignty and Social Contract Theory. 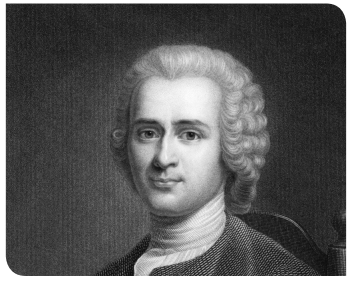 Jean-Jacques Rousseau, one of the most prominent philosophers in the modern political discourse, was born on 28 July, 1712 in Geneva. Hailing from a broken family, Rousseau was devoid of the opportunity to enjoy the privilege of a nurtured childhood. After disengaging from a couple of apprenticeships, he fled from Geneva and found joy in wanderlust. With the help a young widow named Madame de Warens, Rousseau was introduced to formal education in a monastery based in Turin and a seminary in Annecy. The eventual aversion towards the style of pedagogy in those institutions, induced him to abandon the same. Out of the repeated failures, she was forced to send him to Lyons in 1730. After a year of wandering, he re-joined her in 1731 and lived under her bounty till 1740. Influenced by her intellectual halo and her invaluable assistance, he joined as a teacher in the family of Monsieur de Malby. Nonetheless, he left the assignment and resorted to his journey as an aimless soul.

His second trip to France in 1744 brought significant changes in his life. Despite his unsuccessful experiments in various fields like opera, theatre, poetry and so forth, Rousseau sustained his determination and positive spirit. The year 1749 was a turning point in his life. The Academy of Dijon announced the prize for the best essay on “Has the progress of sciences and arts contributed to corrupt or purify morals?” Rousseau writes in his Confessions, “Instantly I saw another universe, and I became another man”. The work he submitted had received the first prize in 1750 and it was published under the title – “A Discourse on the Moral Effects of the Arts and Sciences”.

On his return to Geneva in 1754, Rousseau, a Catholic by himself, accepted Calvinistic denomination and reacquired the citizenship. After his travel to Paris, he spent 8 years of his life at Montmorency as a ward of Madame d’Epinay. Rousseau composed his most important works - The New Heloise (1761), Emile (1762) and the Social Contract (1762) – during this phase. Condemnation was the response received for his books which led to his further resettlements in various places. Rousseau’s demise on 2 July, 1778, was received with a shock and was seen as a great loss to philosophy.

Unlike Hobbes , Rousseau’s proposition of state of nature was an epitome of perfect liberty, perfect equality and perfect innocence. He also identifies it with a more peaceful, pleasant and idyllic environment. The man in his state of nature lived in solitude characterized by

a  care-free living with no desires. Despite the inconsistency in terms of a settled life, and inarticulate speech, the life was shaped by contentment, independence, self-sufficiency and prosperity. Absence of wickedness paved the way for idyllic happiness. As he says, “supreme bliss” was the norm of the time.

In due course, the status quo was threatened by changes in terms of sophistication of human life. He acknowledged a number of factors ranging from the divergences in climate, season and soil to organized profession and private property as responsible for challenging the sustenance of the state of nature. In the view of Rousseau, human progress and rational advancement accompanied by the revolution in the conduct of life and human thought brought a new layer of evils in its  wagon. He identifies the origin of inequality with this shower of changes that shook the fabric of the state of nature. The concept of private ownership created a new cleavage at the social sphere – rich and poor. In his words, “the first man who after enclosing a piece of land said to himself ‘this is mine’ and found people simply to believe him, was the real founder of civil society”.

The period was made to witness a chain of wars, murders and rifts between the rich and poor. This new order sanctioned evils at a universal scale that were unfound in the savage state. An unavoidable culmination of these turn of events was the rise of inequality and a strata of masters and slaves. Rousseau opines that there are two premises on which a savage acts. Firstly, a human is driven by the need of self-preservation and out of the interest of his/her own welfare. Secondly, the fear of death. He finds the genesis of rationality and reason in this emotional consciousness. Rousseau is of the view of that the humans by nature are incapable of thinking. Civil society is viewed as antithetical to nature and it is apparently an outcome of the march of human reason. He insists on the slogan of “returning to nature”. His demand for the retrospection to the nature does not tantamount to a prescription for the collapse of the newly woven social fabric, but the rule of nature. Such a call necessarily unveils Rousseau’s revelation that it is the philosophy and reason that allured the human life to entropy.

Because, the general will is the will of all and aims at the common good.

The idyllic character of the state of nature was short-lived. The emerging template of human complexities defined by economic advancement and social evolution facilitated only havoc. Humans were left with no alternative, but to constitute the civil state. It was materialized with the provision of social contract. In the sixth chapter of the ‘Social Contract’ Rousseau says, “I assume that men have reached at a point where primitive conditions can no longer subsist and the human race would perish unless it changed its mode of existence”. The state of nature is thriving on an individual’s pursuit of self-interest until a point wherein he/she realises that his/her self-preserving prowess against the insecurity posed by others is not strong enough. Hence, the utility of social contract is to encompass the prospects of security deriving from the collective association of individuals with the element of liberty which was possessed until their entry into the contract. The next dilemma that grappled the individuals was the question of force with respect to preservation. To him, men are incapable of creating any new forces but only redirect and guide that already exist. Therefore, a concerted approach is what recommended by him in this direction.

“Man is born free, and everywhere he is in chains. One man thinks himself the master of others, but remains more of a slave than they are” – Rousseau

He also discards any form of authority bereft of consent as volatile. In his own words, “Authority of man over man can have no rational basis, save agreement and consent”. Rousseau’s equation for the civil state can be summed as follows: “Each of us puts his person and all his power under the supreme direction of the general will and in one corporate capacity, we receive each number as an indivisible part of the whole”. Hence, the state thus formed is a moral body with a life and will of its own distinct from its members. The government is expected to be an agent of general will. Rousseau holds that state is not just an amalgamation of individuals, but a new body with an inherent identity, personality and life of its own. Above all, the state possesses a will of its own, what he terms as volente general or general will. Any separate or particular will shall be deemed to be subordinate to it.

The instinct-driven life of the state of nature is replaced by a life of justice and morality in the new civil state. Individuals lose their natural liberty and unlimited right to everything and in return they receive civil liberty and property rights. He condemns the liberty of the state of nature as a falsity as it is nothing but an enslavement of uncontrollable appetites. On the contrary, the moral liberty offered by the civil society make them the masters of themselves. In his own words, “obedience to a law which prescribe to our selves is liberty”. Unlike Hobbes and Locke, Rousseau professes a total surrender of the individual to the sovereign community in pursuit of attaining equality. His idea of individual delegation of all the rights to the body-politic fosters reconciliation between liberty and authority.

Rousseau was particular about the inalienable, indivisible, absolute and perpetual nature of sovereignty. To him, general will was the sovereign. The assignment of administrative powers to certain people do not make them the sovereign, but merely subordinate agents. Any attempt on part of the community to transfer all or a segment of its sovereignty to one of the agents shall result in the descending of the body-politic. Sovereign was a party in Rousseau’s contract. Furthermore, what he underscored was the notion of popular sovereignty.

General will or the community is identical to the state. People submit their powers and personality under the command of the general will. The individuals wills are outweighed by the general will. Besides, sovereignty rests in the body-politic as a whole and it coincides with nothing, but the general will. Given the residence of general will in the community, it imposes the paramountcy and sovereignty of the people, i.e. popular sovereignty. He emphasises the transferability of power. The general will is not equivalent to the will of all since the former considers the common interest whereas the latter attaches private interest into its fold. There are two premises that determine the general will. First, it seeks general good, which refers to the objective of will. Secondly, it must come from all and apply to all, which proposes its origin. General will lacks representative character as the representative bodies have the tendency to develop particular interest of their own without paying heed to the concerns of the community. Ethical values and right consciousness do not coincide with the will of all. General will is invariably the manifestation of inner will and the product of conscience. Moreover, it is recognised as right, altruistic, universal and based on common good.

Opinions are manifold about Rousseau’s personality and works. G. D. H Cole opined about his ‘Social Contract’ to be “still far by the best of all text-books of political philosophy”. Lord Morley took up different turn in expressing the status of Rousseau in the philosophical discourse by saying, “Would it not have been better for the world if Rousseau had never been born?” He tries to say that the awful experiences of the French Revolution could be prevented if Rousseau had not lived as the latter’s ideas were fundamental throughout the movement.

His philosophy also traces a socialistic background. Capitalism received an “ill-treatment” in the hands of Rousseau. He also favoured the nationalization of education and opposed the notion of private property. Besides, his discourse accommodates absolutism and authoritarianism as well. Under the pretext of general will, he is virtually favouring the “tyranny of majority”. Despite all these, Rousseau deserves an irreplaceable position among the modern political philosophers.

Try to understand the meaning of popular sovereignty.

Read about the emergence and impact of the institution of property in the society.