·              Agreed with Pythagoras that Mathem atics were essential in understanding the world.

This introductory chapter – Provides insights into the meaning of Politics and the manner in which it affects the lives of people.

Plato was born in 427/428 BCE. He belonged to an aristocratic family in Athens a Greek City State. Plato’s real name was‘Aristocles’. Some historical sources say his wrestling coach Ariston of Argos dubbed him ‘Platon’ meaning ‘Broad’ on account of his large build. He was a disciple of Socrates who was one of the foremost philosophers of Greece. During his time there was great chaos in the political life of Athens which was a Greek City State. This resulted in the Athenian government condemning Socrates to death because of his teachings. This greatly affected Plato’s views on politics especially in Athens.

In about 387 BCE Plato founded his ‘Academy’. The name ‘Academy’ comes from the name of a famous Athenian hero called ‘Akademos’. Here Plato taught Political Philosophy which contained politics, ethics, mathematics and sociology. 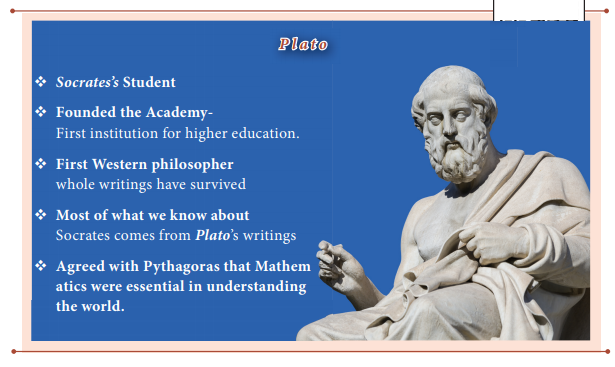 Plato: Teacher, what is Virtue?

Socrates: Plato, it is knowledge.

Plato was greatly influenced by his teacher, Socrates.

The important ideas of Plato are found in his three major works and can be summarised as follows:

In Political Science, the most important concept around which the subject is built is ‘The State’. According to him in an Ideal State (i.e., the most suitable State for a human being to live in according to Plato) should be made up of three classes namely Ruling Class, Military Class and Economic Class. He gives details of how this is possible in his subsequent ideas of Justice and Education. 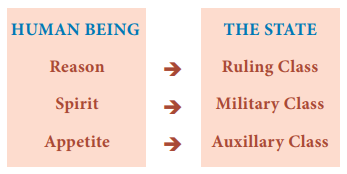 Plato designs an education system based on various stages suited to the age of the students from childhood to adulthood. He also devices methods of eliminations as higher stages of education is reached by human beings depending on the proportion of the three parts of their souls namely reason, spirit and appetite. Persons who are found suited to fulfil economic duties of the State are separated from the ones suited for Ruling and Military services. In the second process of elimination the persons suited for ruling are given special training to become what Plato calls ‘Philosopher Kings’ to rule his ‘Ideal State’.

Every philosopher is the child of his/her own time. The execution of Socrates, the wisest man in Greece, filled Plato with contempt for democracy and believed that it had to be replaced by the rule of the wisest.

In his work ‘The Republic’ Plato had practically condemned Democracy. He had developed the idea that all were not fit to rule and that only the philosophers who had been specially trained for the purpose should rule. He said this because it was Athenian Democracy which condemned his teacher Socrates to death.

Plato’s idea of a constitution is much different from the modern understanding of this term. By constitution he meant a particular way of life the people of a society have designed for their wellbeing. This included social customs, traditions, practices and also politics and government to oversee all these. Plato discussed about constitutions as they existed in many parts of the world during his time and as they ought to be. He classified constitutions as Aristocracy, Timocracy, Oligarchy, Democracy and Tyranny. He also said that there is a tendency of Aristocracy to degenerate into Timocracy, Timocracy into Oligarchy, Oligarchy into Democracy and Democracy into Tyranny.

Bringing up of Children

According to Plato , children were national possession and as such it was obligatory on the part of the State to bring them up according to their attitudes.

Plato used this method in his book ‘The Republic’. He writes this book as if he is asking questions as a student and Socrates is answering as his teacher. ‘Dialectics’ is a question and answer type of method where the student has a vague idea about something and throws questions to the teacher about it and the teacher’s answers are again questioned. By this the teacher facilitates the student to formulate and reformulate his idea in order to arrive at the best possible understanding of the idea.

Plato used this method in his book ‘The Republic’. He writes this book as if he is asking questions as a student and Socrates is answering as his teacher. Unlike ‘Didactics’  i.e.  a  teacher  authoritatively teaches  a  subject  because  the  teacher knows it and the students don’t, ‘Dialectics’ is a question and answer type of method where the student has a vague idea about something and throws questions to the teacher about it and the teacher’s answers are again questioned. By this the teacher facilitates the student to formulate and reformulate his idea in order to arrive at the best possible understanding of the idea.

Plato, though by no means the first philosopher, undoubtedly is  one  of the earliest to leave us a significant body of work. He spent most of his time asking and providing answers to questions that have always troubled people. Even centuries after his death, if we think of politics and the problems of living together , the issues that confront us again and again very often involve the sorts of questions that Plato’s Republic can help us think about in a more focused and sophisticated  way.  Hence, Plato is considered the most influential political philosopher of all times.