Karl Marx is one of the few people who changed the way we see the world. For Marx, any theory should not only support in understanding the world around, but be a step towards transforming the world. His works – Communist Manifesto, Materialistic Conception of History and Das Capital, are a culmination of various economic ideas, channelled towards the single goal of self- emancipation of working class. It is important to know that, Marxism draws many elements from earlier thinkers like Hegel, Comte de Saint-Simon, J. C. L. de Sismondi, David Ricardo, Charles Fourier, and Louis Blanc. 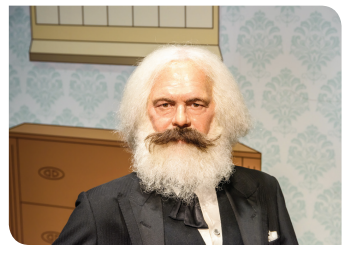 Second half of the 18th century and 19th century witnessed the growth of Socialism in Europe. This period was also known as dual revolution era, wherein politically France witnessed the Revolution of 1789, which overthrew absolute monarchy and republic was proclaimed with liberty, equality and fraternity declared the right of every Frenchman. Second important revolution during this period that had a long lasting impact on Europe was the Industrial Revolution. These two events had a major impact on Marx’s work.

The Communist Manifesto (1848) is a collaborative work of Karl Marx and Friedrich Engels.

It was a product of the social, economic and political turmoil that characterized Europe before 1850. This essay explains the social change through revolution. The Communist Manifesto goes on to argue that the nature of that class struggle varies according to the nature of production. Hence in feudal societies, where the main form of production was agriculture, the class struggle was between those who owned the land and those who worked on it. In a modern industry, the struggle is between the bourgeoisie (factory or business owners) and the proletariat (workers in the factory). In reality the society as a whole is more and more splitting up into two great hostile camps, into two great classes directly facing each other – bourgeoisie and proletariat. It is in this premise that Marx and Engels vouch that “the history of all hitherto existing society is the history of class struggle”.

In conclusion the Communist Manifesto simply places two ideas side by side; “to raise the proletariat to the position of the ruling class” and “to win the battle of democracy”. Marx in this work also emphases that the communist should aim to replace private property with public control of all properties. Marx and Engels may not have changed the world, but they certainly changed the way we interpret it. The historical significance of the Communist Manifesto is that virtually all socialist parties, from the Communist Party of China to the Trotskyite sect, owe a lesser or greater debt to the ideas expressed in its pages.

Dialectical Materialism is a philosophical approach to reality derived from the teachings of Karl Marx and Friedrich Engels. In theory dialectical materialism provides both a general world view and a specific method for the investigation of scientific problems. Marx and Engels look at every basic sections of society as materials and change in society takes place only through “the struggle of opposites”. Materialism principally dealt with social world. The material world has always been in constant motion, contradictions and change. Marx believes that friction caused by constant motion in the society leads to contradictions within the society, which eventually leads to change in the society. Dialectical Materialism relates to the process of change in the society.

Theory of Surplus Value, comes from the Das Capital. Karl Marx opines that human labour was the source of economic value, hence the term ‘surplus value’ denotes the difference between labour and labour power. The Capitalists gets surplus value for the extra labour that has been put in by the labourer. Surplus value is produced no matter how long the working day is: even if the factory only ran for an hour the capitalist would still extract his quota of surplus labour and therefore surplus value. The capitalist pays his workers less than the value their labour, and in most occasions usually only enough to maintain the worker at a subsistence level.

Class consciousness and struggle are related to the social relations of production. Marx does not look at class as a factor of ideology, but as a person who holds particular social status. The term class relates to ownership based on property, for example bourgeoisie (person who owns means of production and also the landowners) and proletariat (one who sells labour for wages).

Marx ’s work on the “Class Struggle of France”, in the years 1848 – 1850 assesses the arguments on the class struggle and the need for revolution. Marx bases his idea of class conflict from the French Revolution of 1848. During this revolution both bourgeoisie and proletariat fought together against the aristocracy and succeeded in the proclamation of republic. Having come to power with the support of the proletariat during the February revolution, the bourgeoisie used the election process to claim legitimacy of their rule. The bourgeoisie class instead of emancipating the working class of all bondages increasingly alienated them.

The bourgeoisie on coming to power started controlling the state and the army, and crushed the proletariat showing that the former meant civil war in reality. Marx emphasises that the class struggle leads to revolution, dictatorship of the proletariat and the abolition of private production resulting in socialism.

Dictatorship of the Proletariat

Dictatorship of the Proletariat is a phrase used by Karl Marx to refer to the assumption of state power by the working class. For Marx, it is a transitional period of permanent revolution between the overthrow of bourgeois political rule and a classless society. Of all Marx’s contribution to political thought, probably the “dictatorship of the proletariat” has had the most profound implication for actual governance.

Withering Away of the State

With the break-up of Society into classes, and consequently into oppressed and oppressing groups, state becomes an instrument of exploitation. The class conflict becomes even more intensive and leading to the dictatorship of proletariat. Signs of victory of the proletariat can be seen with the capture of the government. “The proletariat will take control of the State and converts the means of production into State production. Taking control of the state and production, the proletariats, destroy all class differences and class antagonisms, and finally resulting in the ‘Withering Away of the State’.

In 1852, Marx summarized his contributions into three major sections:

a.       Classes (proletariat and bourgeoisie) are not a permanent features of a society

b.      Class struggle leads to ‘dictatorship of the proletariat’, resulting in workers taking control of production

c.       ‘Dictatorship of the proletariat’ would lead to classless society and with the differences vanishing from the society, the state eventually withers away.

Has the world become stateless as envisaged by Marx? The reality proves other way. Nevertheless, the impact that Marxism had on humanity can only be compared to the influence religion had on mankind. Nearly half of the world population was influenced by Marxist ideology. While, Marx himself would have not followed everything he wrote, his writings did influence leaders like Lenin, Stalin, Mao and others who used Marxist theories in order to bring about change in countries like Russia, China, Cuba, Vietnam, etc. In the present era most of the erstwhile communist countries have become democratic in nature. However, the society continues to witness class differences and it is increasing every year. Hence, so long there are capitalists and exploitation in the society, Marx’s ideas can never be ignored or forgotten.

Contemporary debates on Marxism focus on relative importance of its basic tenets and identification of some new forms of dominations and conflicts emerging in the present day society. These debates led to the emergency of Neo-Marxism.