·              To know about Niccolo Machiavelli Politics and Religion, State, Advice to the Prince. 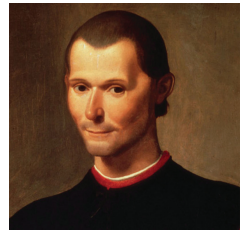 Machiavelli was born in Florence, the centre of Italian culture where influence of Italian culture where influence of the European Renaissance was the strongest among all areas as the third child of attorney Bernardo di Niccolo Machiavelli and his wife Bartolomea di Stefano Nelli. His writings reveal that he received an excellent humanist education that was informed by the Renaissance values. He entered the service of the Republican Government in 1494, the tear of expulsion of the Medici. From 1498 to 1512 he was Secretary to the Chancellery an important post which was concerned with diplomatic, military and administrative affairs. In 1512, consequent upon the restoration of the Medici, Machiavelli lost his office and underwent a brief imprisonment after which he embarked on a literary career. Machiavelli wrote his famous monograph The Prince in 1513 which is addressed to Lorenzo de’Medici. Simultaneously he started writing another important work- the Discourses on the First Ten Books of Titus Livius (in short, the Discourses on Livy) which was completed in 1517. However, both of these works were published posthumously in 1531. Machiavelli also produced some minor literary works but his reputation as a political thinker rests on these two books.

Machiavelli’s theory of Government is determined by his conception of the study of human nature. Like Hobbes, he is very pessimistic about human nature and believes that men by nature are purely selfish and they, in their lives, are always motivated by selfish desires. At one place in ‘The Prince’ he says,” Men are ungrateful, fickle, deceitful, cowardly and avaricious.” He suggests that a monarch should aim to be feared by the people than be loved. For Machiavelli, love implies a bond of obligation which men, being essentially selfish, break on every occasion where their own interest demands it, while fear, for the same reason, holds them indefinitely. He feels that men judge things by appearances and so the ruler should take advantage of this fact and act. For him men are weak and ignorant and are essentially vicious and become good only by necessity. He cautions the ruler never to trust his councillors but to use his own judgement.

Machiavelli holds the view that men have endless desires and one of the most important desire is the love for private property. He makes materialistic individualism as the explanation of love of independence and self-government. In the Discourses also he gives a pessimistic view of human nature. He maintains materialistic gain as the fundamental consideration of humans. He says that this motive of the people make them desire for republic and dislike monarchy. Under Republican government there are more chances for people to get material gain. This is not possible in a monarchy because the Prince takes all the gains and profits himself. An independent nation is preferred because a free nation enables the multiplication of wealth for the masses.

Separation between Politics and Morality

In Greek political thought, ethics was viewed as the foundation of politics. But Machiavelli made a striking departure from this classical ideal. He believed that politics is governed by its own independent standards; hence it cannot be bound by the conventional ethical standards. He insisted on separation between politics and ethics. According to him the ruler should be honest, righteous and true to his word, but in reality nobody can have all these qualities and these qualities will not enable a ruler to rule over vicious people. So the Prince should focus on the preservation of the State without being bound by moral obligations. Machiavelli does not contend that ‘ends justify the means’ but he claims that a ruler’s success will be judged by popular verdict, and that he will be excused for using dubious means if he is successful in the end. If political expediency requires the Prince to set aside traditional morality, he should go ahead in the interest of successful politics.

Niccolo Machiavelli on separation of politics from religion

Machiavelli breaks away from the tradition maintained by Plato, Aristotle, St.Thomas Aquinas and others who believed in the ethical purpose of the State. He separates politics from both religion and morality and gives an autonomous status to politics. According to Mahiavelli, it is not a practical policy for the prince to follow the principles of religion and ethics in his statecraft.

According to Machiavelli, the right method to study political Science was historical. He says that human desires and passions remain the same always and when the incidents of life are comparable, humanity will tend to find the same remedies and repeat the same conduct. He therefore regarded that the study of the past was very useful to understand the present and would also make it easy to make predictions for the future. He placed the study of politics on historical and realistic foundation and relied on empirical method particularly in the study of political behaviour. He has been described as a pioneer of behaviouralism. He followed this method almost in all contexts both in the Prince and Discourses. He conceived of politics as an instrument of acquisition, preservation and expansion of power which could be accomplished by harnessing the faculties of the people as they exist in the real world.

Machiavelli’s method has been called inductive or scientific on the ground that he drew conclusions from practical or historical experiences of human nature that does not change under different political regimes. His originality lies in focussing on man’s behavioural patterns instead of certain morals for the analysis of politics. However critics have pointed out that Machiavelli’s method was only superficially scientific and historical. He did not follow inductive method of proceeding from the ‘particular to general’. Nor is his method deductive, which is the method of proceeding from the ‘general to the particular’. According to them Machiavelli never touches upon the central problems of political philosophy, such as the justificationof the existence of the State, grounds and limits of political obligation etc., He never looks beyond the necessities of practical politics although his vision was broad.

“Single ruler is necessary to found and reform states; republican governments are better at sustaining them once established”.

George H. Sabine has rightly observed that there is no inconsistency between Machiavelli’s tow leading books The Prince and The Discourses on Livy. Both deal with the same subject-The causes of the rise and decline of States and the means of making them permanent. The Prince deals with monarchies or absolute governments and the Discourses mainly with the expansion of the Roman republic.

Machiavelli’s enunciation of statecraft is his most notable as well as controversial contribution. It is notable because it provides unique guidelines, it is controversial because it allows the ruler to use certain immoral practices for successful governance. While Machiavelli advised the ruler to set aside moral bindings in order to achieve his end, he did not think that conventional morality was totally irrelevant to politics. He enunciates a double standard of morals, one for the ruler and another for his servants and citizens. The ruler’s moral implies his undivided commitment to strengthen the state and enhancing his power in order to maintain law and order within the state and to ensure effective defence from foreign invaders. His performance will be judged by his success in fulfilling his responsibility. But his servants and citizens are not allowed to depart from the conventional morality, otherwise the purpose of the state itself will be defeated.

Machiavelli \wants the Prince to act so carefully that he is held in high esteem among the people. The Prince must be conscious of the prevalence of ‘universal egoism’. Government is found to provide the people with security from internal offenders as well as external enemies. A wise ruler will frame his policy with a view to creating an atmosphere of security of life, property and honour of the people. He advises the Prince to provide for security of women in the state. People will be loyal to their ruler when they are sure that their life, property and women are safe in the state.

Machiavelli did not intend to undermine the foundations of morality in society. As a sincere patriot, he was particularly anxious to build a strong nation-state in Italy which was then fragmented into five parts: Florence, Venice, Naples, Milan and the territory of the Roman Catholic Church. He wanted his country to win a respectable place among other nation-states of Europe. He was also worried about the then prevailing moral corruption among Italians. Though he preferred a republic, he advocated monarchy for the then existing condition of Italy.

Examine why Machiavelli is considered as the first modern thinker.

Study the features of monarchical and republican forms of governments.