·              To gain knowledge about Aristotle ideas on Ideal State, Citizenship, normal and  perverted  forms of constitution and Monarchy, forms of government and democracy 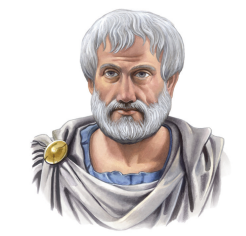 William Ebenstien says” In the One history of political philosophy no has surpassed Aristotle in encyclopaedic interest and accomplishment”.

Aristotle was Plato’s student at his ‘Academy’. After Plato’s death, Aristotle found his own school called ‘The Lyceum’ in 335 BCE. It is here that Alexander studied under Aristotle. The teaching and research program included every branch of knowledge. Aristotle was born in Stagira in 384 BCE. Unlike Plato, Aristotle came from an upper middle class family. His father Nicomachus was the personal physician to king Amyntas of Macedon.

‘Aristotle’ whose name means ‘the best purpose’ stood true to his name when he proposed the ‘Best Practicable State’ as opposed to Plato’s ‘Ideal State’. According to Aristotle, “the State exists for an end and this end is the supreme good of man in both moral and intellectual life”.

He wrote many books on subjects ranging from Greek literature to Zoology. But his most famous work is called ‘Politics’ from which modern Political Science has grown. Thus he is called as the ‘father of Political Science’. Though the exact date of its publication is not known, it is a voluminous work consisting of 8 books and having more than 1000 pages.

Unlike Plato’s agreement with his teacher Socrates, Aristotle did not agree on many things his teacher Plato had to say.

Almost all his political ideas are known through his book ‘Politics’.

State as a Natural Institution

According to him authority of the State is moral and the State is natural. Since the family could not satisfy the ever increasing needs of the people, they had to come out of their limited circle and thought of creating the State. The families combined together to make the State and made it a perfect association. Aristotle believes that the State is an individual writ large because the individual can think of perfection only in a State.

Functions of the State

According to Aristotle the foremost function of the State is to promote good life and create essential conditions for mental, moral and physical development of the people. The State should also function in such a way that good habits of individuals are converted into good actions and promote good, happy and honourable life.

Aristotle did not believe that mere residence or enjoyment of legal rights or birth should confer the right of citizenship on a person. He said, “It is the function which entitles a person to become citizen”. A person should participate in the popular assembly which was vested with the authority of exercising sovereign powers. A citizen should be able to partake in decision making process of the government.

He classifies States on quantitative as well as qualitative basis: 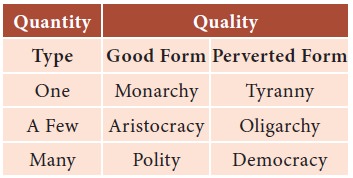 According to Aristotle, if sovereignty resides in one person it is Monarchy. It degenerates into Tyranny. Thus the people wrest the State from the tyrant and give it to a few rulers and thus Aristocracy comes into being. Then it perverts into Oligarchy, people again revolt and transfer power to many rulers by which the State becomes a Polity. When this degenerates, it becomes a Democracy because these rulers no longer have sight of the common good for which the State came into being. This again gives rise to Monarchy.

According to Aristotle , the slave is the first of the animate property of a Master, i.e., the slave is first among all living property of the household of which the master is the head. He says those who are not virtuous are slaves. The slave is an instrument of action and not that of production because as soon as he starts performing productive functions, he loses his character as a slave and becomes virtuous.

Aristotle believes that the family is a natural institution and in fact it existed prior to the State. It is natural as individuals become members from their very birth. It is the starting point of moral life and the nucleus of the State.

The reason Aristotle says the citizens of a State must have property as well as slaves is because the citizens must have leisure, so that the citizen may spend useful time in thinking and deliberating on furthering the good life of all though the State.

Aristotle is of the opinion that revolutions occur firstly due to constitutional changes. This change could be large or small. For e.g.: change from Monarchy to Tyranny could set off a revolution by the people. Secondly he says revolutions could occur due to loss of purpose of the State though there may not be any change in the State’s constitution.

Thus, Aristotle is still considered one of the greatest thinkers in politics, psychology and ethics. His intellectual range was vast covering most of the sciences and many of the arts. His works have laid the foundation of centuries of philosophy. Even after the intellectual revolution of the Renaissance, the Reformation and the Enlightenment, Aristotelian concepts remain embedded in world philosophy. Therefore, he is undoubtedly one of the most influential philosophers of all time.

Divide the class into Plato’s group and Aristotle’s group and debate in support of each philosopher’s theories.

Find out the name of the school of philosophy established by Aristotle.

Tyranny, oligarchy and democracy form of governments the rulers seek their own personal profit. Do you agree? Discuss.