According to Faradays laws of electromagnetic induction

According to Faradays laws of electromagnetic induction 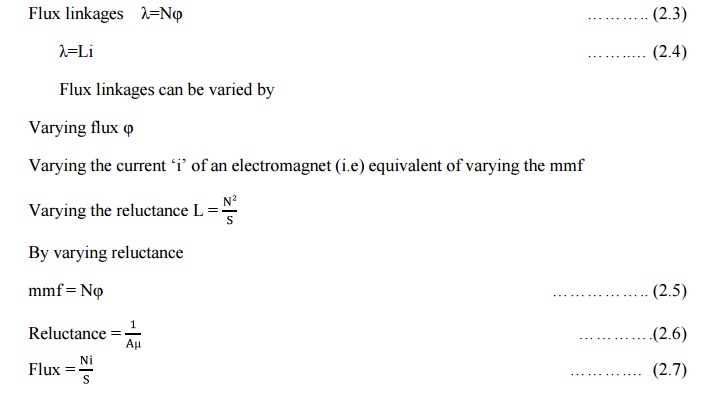 If the reluctance of magnetic circuit can be varied, inductance L and the flux linkages λ can also be varied.

Consider a magnetic circuit as shown in fig. 2.29.

The stator consists magnetic core with two pole arrangement. Stator core carries a coil. Rotor is also made up of ferrous material. The motor core is similar to a salient pole machine. Let the angle between the axis of stator pole and rotor pole be θ. let the angular displacement be illustrated using fig. 2.29 (a, b and c).

As shown in fig. 2.29 (a) the air gap between the stator and rotor is very very small. Thereby the reluctance of the magnetic path is least. Due to minimum reluctance, the inductance of the circuit is minimum. Let it be Lmax

As shown in fig. 2.29(b) in this only a portion of rotor poles cover the stator poles. Therefore reluctance of the magnetic path is more than that of case 1.due to which the inductance becomes less than Lmax .

As shown in fig. 2.29(c) the air gap between the stator poles has maximum value. Thereby reluctance has a value yielding minimum inductance. Let it be  Lmax.

Variation in inductance with respect to the angle between the stator and rotor poles is shown in fig. 2.30.

As per faradays law of electromagnetic induction an emf induced in an electric circuit when there exists a change in flux linkages.

On the basis of magnetic circuit/field theory it is known that the stored energy in a magnetic field. 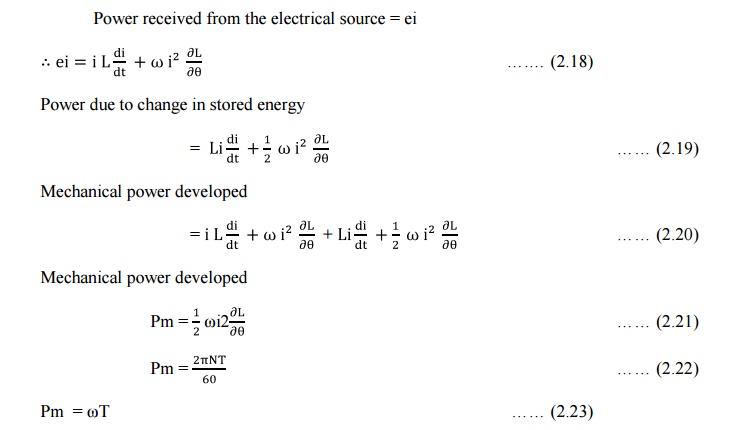 *      Torque is proportional to i2 : Therefore it does not depend upon the direction of the current.