Principle of operation : Most widely used hybrid motor is the two phase type as shown in fig2.11.

Most widely used hybrid motor is the two phase type as shown in fig2.11. This model has four poles and operates on one phase on excitation. 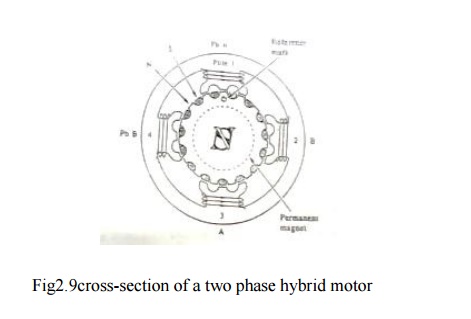 The coil in pole 1 and that in pole 3 are connected in series consisting of phase A, and pole 2 and 4 are for phase B. Fig 2.12 shows the proce3ss of rotor journey as the winding currents are switched in one phase ON excitation.

The poles of phase A are excited the teeth of pole 1 attract some of the rotors north poles, while the teeth of pole 3 align with rotor‘s south poles. Current is then switched to phase B, The rotor will travel a quarter tooth pitch so that tooth alignment takes place in 2 and 4.

The structures of two phase motor considered in fig.2.11 will not produce force in a symmetrical manner with respect to the axis. The motor having 8 poles in the stator shown in fig2.13 considered as the structure in which torque is generated at a symmetrical position on the surface. 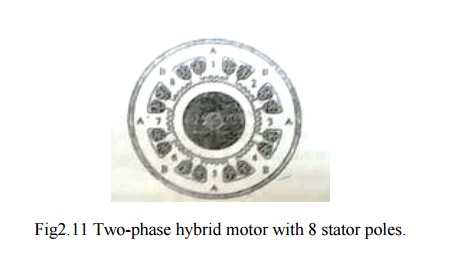