The stepper motor is a digital device that needs binary (digital) signals for its operation .Depending on the stator construction two or more phases have to be sequentially switched using a master clock pulse input. The clock frequency determines the stepping rate, and hence the speed of the motor. The control circuit generating the sequence is called a translator or logic sequencer.

The fig 2.38 shows the block diagram of a typical control circuit for a stepper motor. It consists of a logic sequencer, power driver and essential protective circuits for current and voltage limiting. This control circuit enables the stepper motor to be run at a desired speed in either direction. The power driver is essentially a current amplifier, since the sequence generator can supply only logic but not any power. The controller structure for VR or hybrid types of stepper motor

Two simple types of sequencer build with only two JK-FFs are shown in fig 2.39 for unidirectional case. Truth tables for logic sequencer also given for both the directions. 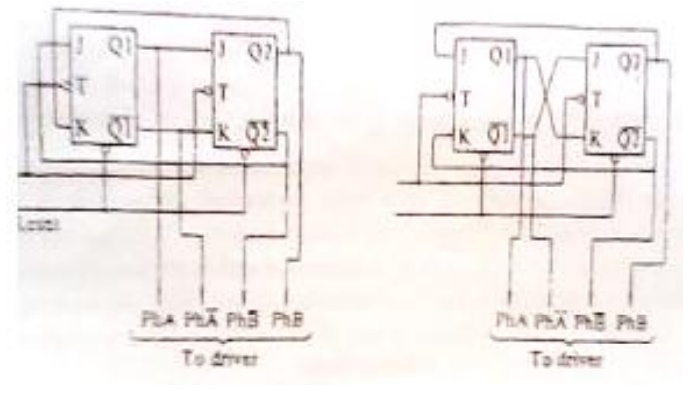 Fig.2.25 A unidirectional logic sequencer for two phase on operation of a two phase hybrid motor

The corresponding between the output terminals of the sequencer and the phase windings to be controlled is as follows. 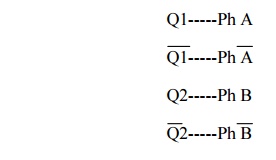 If Q1 is on the H level the winding Ph A is excited and if Q1is on L level, Ph A is not excited.

To reserve the rotational direction, the connection of the sequencer must be interchanged. The direction switching circuits shown in fig 2.40 may be used for this purpose. The essential functions being in the combination of three NAND gates or two AND gates and a NOR gate.

The number of logic signals discussed above is equal to the number of phases and the power circuitry is identical for all phases. Fig. 2.44(a) shows the simplest possible circuit of one phase consisting of a Darlington pair current amplifier and associated protection circuits. The switching waveform shown in fig. 2.44(c) is the typical R-L response with an exponential rise followed by decay at the end of the pulses.

In view of the inductive switching operation, certain protective elements are introduced in the driver circuit. These are the inverter gate 7408, the forward biased diode D1 and the freewheeling diode D. The inverter IC provides some sort of isolation between the logic circuit and the power driver.

There are some problems with this simple power circuit. They can be understood by considering each phase winding as a R-L circuit shown in fig. 2.44(b) subject to repetitive switching. On application of a positive step voltage, the current rises exponentially as

Where I=V/R – rated current and 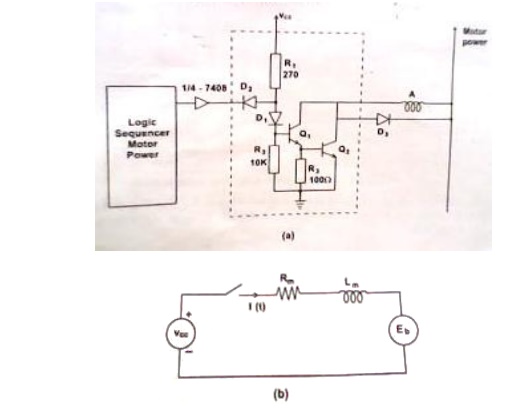 In practice, the time constant Ԏ limits the rise and fall of current in the winding. At low stepping rate the current rises to the rated value in each ON interval and falls to zero value in each OFF interval. However as the switching rate increases, the current is not able to rise to the steady state, nor fall down to zero value with in the on/off time intervals set by the pulse waveform. This in effect, smoothens the winding current reducing the swing as shown in fig. 2.45. As a result the torque developed by the motor gets reduced considerably and for higher frequencies, the motor just ‗vibrates‘ or oscillates within one step of the current mechanical position.

In order to overcome these problems and to make improvement of current build up several methods of drive circuits have been developed.

For example when a transistor is turned on to9 excite a phase, the power supply must overcome effect of winding inductances has tendency to oppose the current built up. As switching frequency increases the position that the buildup time takes up within the switching cycle becomes large and it results in decreased torque and slow response.

Here the initial slope of the current waveform is made higher by adding external resistance in each winding and applying a higher voltage proportionally. While this increases the rate of rise of the current, the maximum value remains unchanged as shown in fig. 2.46.

The circuit time constant is now reduced and the motor is able to develop normal torque even at high frequencies. The disadvantage of this method is Flow of current through external resistance causesI2R losses and heating. This denotes wastage of power as far as the motor is concerned.

In order to reach the same steady state current IR as before, the voltage required

To be applied is much higher than before. Hence this approach is suitable for small instrument stepper motor with current ratings around 100 mA, and heating is not a major problem.

To reduce the power dissipation in the driver and increase the performance of a stepping motor, a dual-voltage driver is used. The scheme for one phase is shown in fig. 2.47.

When a step command pulse is given to the sequencer, a high level signal will be put out from one of the output terminal to excite a phase winding. On this signal both T1  and T2 are turned on, and the higher voltage EHwill be applied to the winding. The diode D1 is now reverse biased to isolate the lower voltage supply. The current build up quickly due to the higher voltage EH. The time constant of the monostable multivibrator is selected so that transistor T1 is turned off when the winding current exceeds the rated current by a little. After the higher 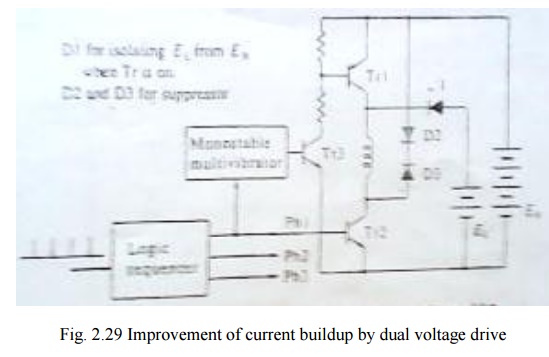 Voltage source is cut off the diode is forward biased and the winding current is supplied from the lower voltage supply. A typical current wave form is shown in fig. 2.48. 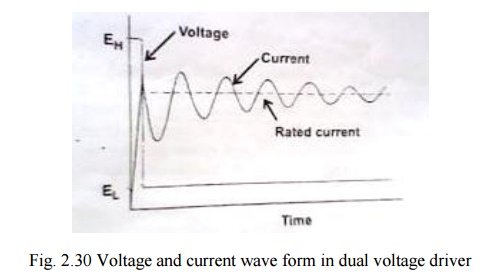 When the dual voltage method is employed for the two phase on drive of a two phase hybrid motor, the circuit scheme will de such as that shown in fig.2.49. Two transistor T 1 &T 2 and two diodes D1 and D2 are used for switching the higher voltage. In dual voltage scheme as the stepping rate is increased, the high voltage is turned on for a greater percentage of time.

This drive is good and energy efficient. However it is more complex as it requires two regulated power supplies EH& EL end two power transistor switches Tr1 & Tr2 and complex switching logic. Hence it is not very popular.

The chopper drive is particularly suitable for high torque stepper motors. It is ener4gy efficient like the bi-level drive but the control circuit is simpler.

A winding on a stepping motor is inductive and appears as a combination of inductance and resistance in series. In addition, as a motor revolves a counter emf is produced in the winding. The equivalent circuit to a winding is hence, such as that shown for designing a power driver one must take into account necessary factors and behavior of this kind of circuit. Firstly the worst case3 conditions of the stepping motor, power transistors, and supply voltage must be considered. The motor parameters vary due to manufacturing tolerance and operating conditions. Since stepping motors are designed to deliver the highest power from the smallest size, the case temperature can be as high as about 100°c and the winding resistance therefore increases by 20 to 25 per cent.

These circuits are needed to ensure fast decay of current through the winding when it is turned off. When the transistor in the above fig is turned off a high voltage builds up to Ldi/dt and this voltage may damage the transistor. There are several methods of suppressing this spike voltage and protecting the transistor as shown in the following.

If a diode is put in parallel with the winding in the polarity as shown in fig. a circulating current will flow after the transistor is turned off, and the current will decay with time. In this scheme, no big change in current appears at turn off, and the collector potential is the supply potential E plus the forward potential of the diode. This method is very simple but a drawback is that the circulating current lasts for a considerable length of time and it produces a braking torque. 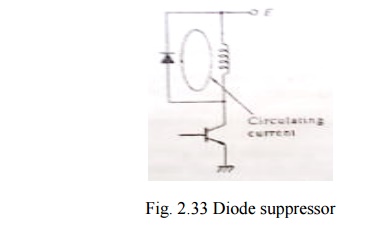 A resistor is connected in series with the diode as shown in fig to damp quickly the circulating current. The voltage VCE applied to the collector at turn-off in this scheme is

I= Current before turning off 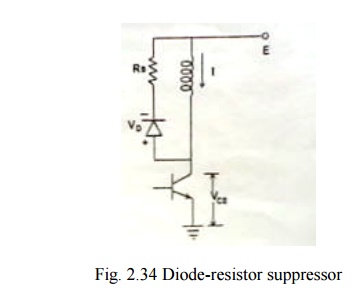 A high resistance RS is required to achieve a quick current decay, but this also results in a higher collector potential VCE, thus a transistor with a high maximum voltage rating is necessary.

In this zener diode are often used to connect in series with the ordinary diode as shown in fig. Compared with preceding two cases zener diode which provides negative bias causes the current to decay more quickly after turn off. In addition to this, it is a merit of this method that the potential applied to the collector is the supply potential plus the zener potential, independent of the current. This makes the determination of the rating of the maximum collector potential easy. However zeners are signal diodes, rather than power diodes. Their power dissipation is limited to 5w. Consequently, this suppressor can be used for very small instrument stepper motors of typical size 8 to 11. 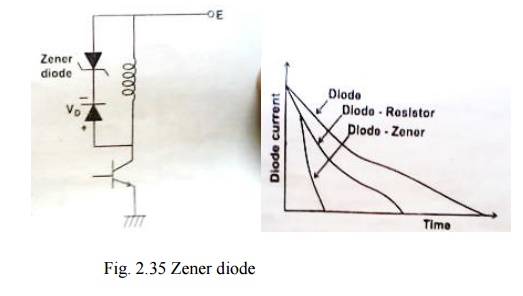 This scheme is often employed for bifilar-wound hybrid motor. An explanation is given for the given for the circuit shown in fig: 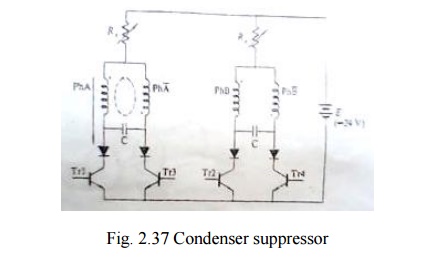 A condenser is put between ph A and ph A1. These condensers serve two fold purposes.

1. When a transistor is turned off, the condenser connected to it via a diode absorbs the decaying current from the winding to protect the transistor.

Let us see the situation just after the Tr 1 is turned off in the one phase on mode. Either Tr2 or Tr4 will turn on, but Tr3 will still be in the turned off state . Since the winding of ph A and ph A1 are wound in the bifilar fashion, a transient current will circulate in loop. If Tr 3 is turned on when the transient current becomes zero and the charge stored in the condenser becomes maximum, a positive current can easily flow through phase A winding. By this resonance mechanism, currents are used efficiently in this scheme. This feature remains in the two phase on mode too. The condenser suppressor is suited to drives in which stepping rate is limited in a narrow range.

2 .Another utility of condensers is as an electrical damper, a method of damping rotor oscillations is to provide a mechanism to convert kinetic energy to joule heating. If a rotor having a permanent magnet oscillates, an alternating emf is generated in the winding. However if a current path is not provided or a high resistance is connected, no current will be caused by this emf. When the condenser is connected between phases an oscillatory current will flow in the closed loop and joule heat is generated in the windings, which means that the condenser works as an electrical damper.