Listening is the effort or work of placing the therapist where the patient is (“lives”).

Listening is the effort or work of placing the therapist where the patient is (“lives”). Greenson (1978) would call it “going along with”; Rogers (1951) “centering on the client”. The ear of the empathic listener is the organ of receptivity – gratifying and, at times, indulging the patient. Greenson would say that it is better to be deceived going along with the patient than to reject him/her prematurely and have the door slammed to the patient’s inner world. That is what is meant by the suspension of beliefs for the discovery of the true self. Harry Stack Sullivan, the father of in-terpersonal psychiatry, would remind us to heed those shrewd, small questions: “What is he up to?” “Where is he taking us?” Every human being has a preferred interpersonal stance, a set of relationships and transactions with which she or he is most comfortable and feels most gratified. The problem is that for most psychiatric patients they do not work well. This is the wisdom that Sullivan (1953) was articulating.

Beyond attitudes that enable or prevent listening there is a role for specific knowledge. It is important to achieve the cog-nitive structure or theoretical framework and use it with rigor and discipline in the service of patients so that psychiatrists can employ more than global “feelings” or “hunches”. In striving to grasp the inner experience of any other human being, one must know what it is to be human; one must have an idea of what is inside any person. This provides a framework for understand-ing what the patient – who would not be a patient if he fully understood what was inside of him – is struggling to communi-cate. Personality theory is absolutely crucial to this process.

Whether we acknowledge it or not, every one of us has a theory of human personality (in this day and age of porous boundaries between psychology and biology, we should really speak of a psychobiological theory of human experience) which we apply in various situations, social or clinical. These theories become part of the template alluded to earlier that allow certain words, stories, actions, and cues from the patient to jump out with profound meaning to the psychiatrist. There is no substitute for a thorough knowledge of many theories of human functioning and a well disciplined synthesis and internal set of rules to decide which theories to use in which situations. 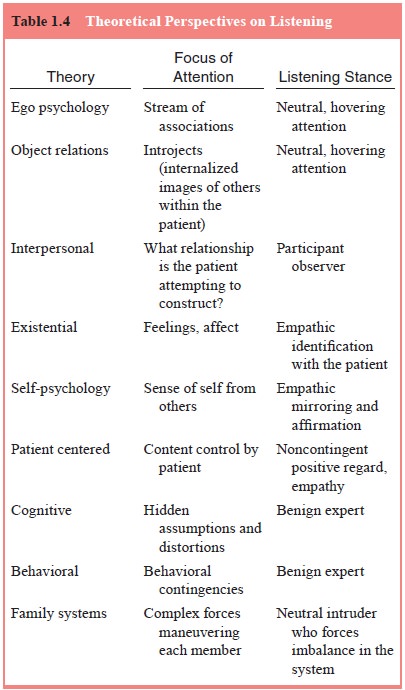 ·   Freud’s associative methods (Brill, 1938) and ego psychology (Freud, 1946), in which one listens for the associative trends and conflicts.

persons of the past who live within the patient’s mind, com-prising the person’s psychic structure; the latter discovered the knowing through the interpersonal experience of the ther-apeutic dyad (Greenberg and Mitchell, 1983).

·   Binswanger’s (1963) understanding of the condition of empa-thy, in which the listener gives up his or her own position for that of the storyteller.

·   Kohut’s (1991) self-psychology, which emphasizes the use of vicarious introspection to reflect (mirror) back to the patient what is being understood. This mirroring engenders in the storyteller a special sense of being “found”, that is, of being known, recognized, affirmed, and heard. This feeling of be-ing heard helps to undo the sense of aloneness so common in psychiatric patients.

Each of the great schools of psychotherapy places the psy-chiatrist in a somewhat different relationship to the patient. This may even be reflected in the physical placement of the therapist in relation to the patient. In a classical psychoanalytic stance, the therapist, traditionally unseen behind the patient, assumes an ac-tive, hovering attention. Existential analysts seek to experience the patient’s position and place themselves close to and facing the patient. The interpersonal psychiatrist stresses a collaborative dialogue with shared control. One can almost imagine the two side by side as the clinician strives to sense what the storyteller is doing to and with the listener. Interpersonal theory stresses the need for each participant to act within that interpersonal social field.

In the object relations stance, the listener keeps in mind the “other people in the room” with him and the storyteller, that is, the patient’s introjects who are constantly part of the internal conversation of the patient and thus influence the dialogue within the therapeutic dyad. In connecting with the patient, the listener is also tuned in to the fact that parts and fragments of him or her are being internalized by the patient. The listener becomes another person in the room of the patient’s life experience, within and outside the therapeutic hour. Cognitive and behavioral psy-chiatrists are kindly experts, listening attentively and subtly for hidden assumptions, distortions, and connections. The family systems psychiatrist sits midway among the pressures and forces emanating from each individual, seeking to affect the system so that all must adapt differently.

we can see the different theoretical models of the listening process in the dis-covery of the meaning of “little fella”. Freud’s model is that the psychiatrist had listened repeatedly to a specific association and inquired of its meaning. Object relations theorists would note that the clinician had discovered a previously unidentified, powerful introject within the therapeutic dyad. The interpersonal psychia-trist would see the shared exploration of this idiosyncratic man-ner of describing one’s youth; the patient had been continually trying to take the therapist to “The Andy Griffith Show”. That is, the patient was attempting to induce the clinician to share the experience of imagining and fantasizing about having Andy Griffith as a father.

Existentialists would note how the psychiatrist was changed dramatically by the patient’s repeated use of this phrase and then altered even more profoundly by the memory of Andy Griffith, “the consummate good father” in the patient’s words. The therapist could never see the patient in quite the same way again, and the patient sensed it immediately. And Kohut wouldnote the mirroring quality of the psychiatrist’s interpreting the meaning of this important memory. This would be mirroring at its most powerful, affirming the patient’s important differences from his family, helping him to consolidate the memories. The behavioral psychiatrist would note the reciprocal inhibition that had gone on, with Andy Griffith soothing the phobic anxieties in a brutal family.

A cognitive psychiatrist would wonder whether the pa-tient’s depression resulted from a hidden assumption that any-thing less than the idyllic images of television was not good enough. The family systems psychiatrist would help the patient see that he had manipulated the forces at work on him and actu-ally changed the definition of his family.

The ways and tools of listening also change, according to the purpose, the nature of the therapeutic dyad. The ways of listening also change depending upon whether or not the psy-chiatrist is preoccupied or inattentive. The medical model psy-chiatrist listens for signs and symptoms. The analyst listens for the truth often clothed in fantasy and metaphor. The existentialist listens for feeling, and the interpersonal theorist listens for the shared experiences engendered by the interaction. Regardless of the theoretical stance and regardless of the mental tension be-tween the medical model’s need to know symptoms and signs and the humanistic psychiatrist’s listening to know the sufferer, the essence of therapeutic listening is the suspension of judgment be-fore any presentation of the story and the storyteller. The listener is asked to clarify and classify the inner world of the storyteller at the same time he is experiencing it – no small feat!