How Does One Hear Words in This Way?

The preceding clinical vignettes, once described, sound straight-forward and easy.

How Does One Hear Words in This Way?

The preceding clinical vignettes, once described, sound straight-forward and easy. Yet, to listen in this way the clinician must acquire specific yet difficult-to-learn skills and attitudes. It is extremely difficult to put into words the listening processes embodied in these examples and those to follow.

Students, when observing experienced psychiatrists in-terviewing patients, often express a sense of wonder such as: “How did she know to ask that?” “Why did the patient open up with him but not with me?” “What made the diagnosis so clear in that interview and not in all the others?” The student may respond with a sense of awe, a feeling of ineptitude and doubt at ever achieving such facility, or even a reaction of disparage-ment that the process seems so indefinable and inexact. The key is the clinician’s ability to listen.

Psychiatrists, more than any other physicians, must simul-taneously listen symptomatically and narratively/experientially. They must also have access to a variety of theoretical perspec-tives that effectively inform their listening. These include be-havioral, interpersonal, cognitive, sociocultural and systems theories. Symptomatic listening is what we think of as traditional medical history taking, in which the focus is on the presence or absence of a particular symptom, the most overt content level of an interview. Narrative–experiential listening is based on the idea that all humans are constantly interpreting their experi-ences, attributing meaning to them, and weaving a story of their lives with themselves as the central character. This process goes on continuously, both consciously and unconsciously, as a run-ning conversation within each of us. The conversation is between parts of ourselves and between ourselves and what Freud called “internalized objects”, important people in our lives whose im-ages, sayings, and attitudes become permanently laid down in our memories. This conversation and commentary on our lives includes personal history, repetitive behaviors, learned assump-tions about the world and interpersonal roles. These are, in turn, the products of individual background, cultural norms and val-ues, national identifications, spiritual meanings and family system forces. 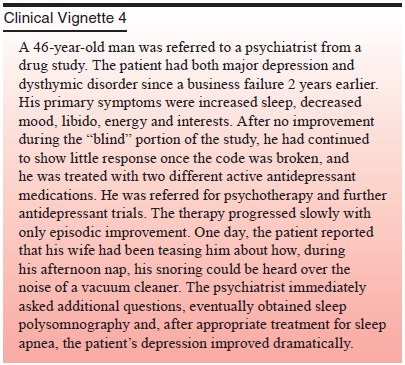 It seems that three factors were present that enabled the psychiatrist in the above vignette to listen well and identify an unusual diagnosis that had been missed by at least three other ex-cellent clinicians who had all been using detailed structured in-terviews that were extremely inclusive in their symptom reviews. First, the psychiatrist had to have readily available in mind all sorts of symptoms and syndromes. Secondly, he had to be in a curious mode. In fact, this clinician had a gnawing sense that something was missing in his understanding of the patient. There is a saying in American medicine designed to focus students on the need to consider common illnesses first, while not totally ig-noring rarer diseases: when you hear hoofbeats in the road, don’t look first for zebras. We would say that this psychiatrist’s mind was open to seeing a “zebra” despite the ongoing assumption that the weekly “hoofbeats” he had been hearing represented the eve-ryday “horse” of clinical depression. Finally, he had to hear the patient’s story in multiple, flexible ways, including the possibility that a symptom may be embedded in it, so that a match could be noticed between a detail of the story and a symptom. Eureka! The zebra could then be seen although it had been standing there every week for months.

Looking back, we see the same phe-nomenon of a detail leaping out as a significant piece of missing information that dramatically influences the treatment process. To accomplish this requires a cognitive template (symptoms and syndromes; developmental, systemic and personality theories; awareness of cultural perspectives), a searching curious stance, and flexible processing of the data presented. If one is able to internalize the skills listed in Table 1.1, the listener begins auto-matically to hear the meanings in the words. 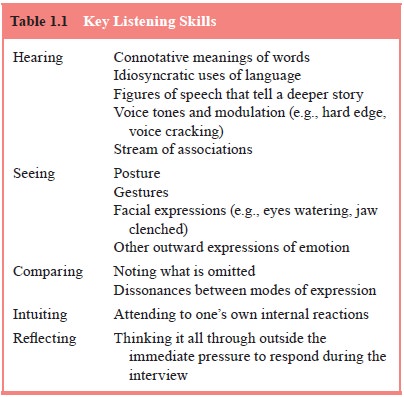 Study Material, Lecturing Notes, Assignment, Reference, Wiki description explanation, brief detail
Essentials of Psychiatry: Listening to the Patient : How Does One Hear Words in This Way? |