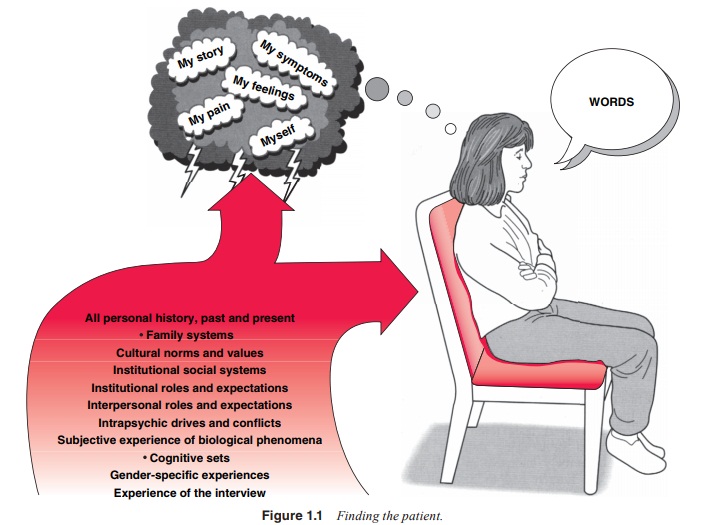 The first step in developing good listening skills involves coming to grips with the importance of inner experience in psychiatric treatment and diagnosis.

The first step in developing good listening skills involves coming to grips with the importance of inner experience in psychiatric treatment and diagnosis. The Diagnostic and Statistical Man-ual of Mental Disorders, Fourth Edition (American Psychiatric Association, 1994) and International Classifi cation of Diseases, 10th Revision (World Health Organization, 1992) have been enor-mous advances in reliability and accuracy of diagnosis, but their emphasis on seemingly observable phenomena has allowed the willing user to forget the importance of inner experience even in such basic diagnoses as major depressive disorder. Consider the symptom “depressed mood most of the day” or “markedly dimin-ished interest or pleasure” or even “decrease or increase in appe-tite”. These are entirely subjective symptoms. Simply reporting depression is usually not sufficient to convince a psychiatrist that a diagnosis of depression is warranted. In fact, the vast majority of psychiatric patients are so demoralized by their illnesses that they often announce depression as their first complaint. Further, there are a significant number of patients who do not acknowl-edge depression yet are so diagnosed. The clinician might well comment, “Sitting with him makes me feel very sad”.

The psychiatrist must listen to much more than the pa-tient’s overt behavior. There are qualities in the communica-tion, including the inner experiences induced in the listener, that should be attended to. The experienced clinician listens to the words, watches the behavior, engages in and notices the ongo-ing interaction, allows himself/herself to experience his/her own inner reactions to the process, and never forgets that depression and almost all other psychiatric symptoms are exclusively pri-vate experiences. The behavior and interactions are useful inso-far as they assist the psychiatrist in inferring the patient’s inner experience.

Therefore, to convince a clinician that a patient is de-pressed, not only must the patient say she/he is depressed, but the observable behavior must convey it (sad-looking face, sighing, unexpressive intonations, etc.); the interaction with the inter-viewer must convey depressive qualities (sense of neediness, sad-ness induced in the interviewer, beseeching qualities expressed, etc.). In the absence of both of these, other diagnoses should be considered, but in the presence of such qualities, depression needs to remain in the differential diagnosis.

Even when we make statements about brain function with regard to a particular patient, we use this kind of listen-ing, generally, by making at least two inferences. We first listen to and observe the patient and then infer some aspect of the pa-tient’s private experience. Then, if we possess sufficient scien-tific knowledge, we make a second inference to a disturbance in neurochemistry, neurophysiology, or neuroanatomy. When psychiatrists prescribe antidepressant medication, they have in-ferred from words, moved into inner experiences, and come to a conclusion that there is likely a dysregulation of serotonin or norepinephrine in the patient’s brain.

As one moves towards treatment from diagnosis, the con-tent of inner experience inferred may change to more varied states of feelings, needs, and conflicts, but the fundamental process of listening remains the same. The psychiatrist listens for the mean-ing of all behavior, to the ongoing interpersonal relationship the patient attempts to establish, and to inner experiences as well.

Despite all of the technological advances in medicine in general and their growing presence in psychiatry, securing or eliciting a history remains the first and central skill for all physi-cians. Even in the most basic of medical situations, the patient is trying to communicate a set of private experiences (how does one describe the qualities of pain or discomfort?) that the physician may infer and sort into possible syndromes and diagnoses. In psychiatry, this process is multiplied, as indicated in Figure 1.1. William Styron (1990), a prizewinning novelist, had to go to ex-traordinary lengths in his eloquent attempt to convey the “searing internal mental pain” that he experienced when suffering from a major depression. 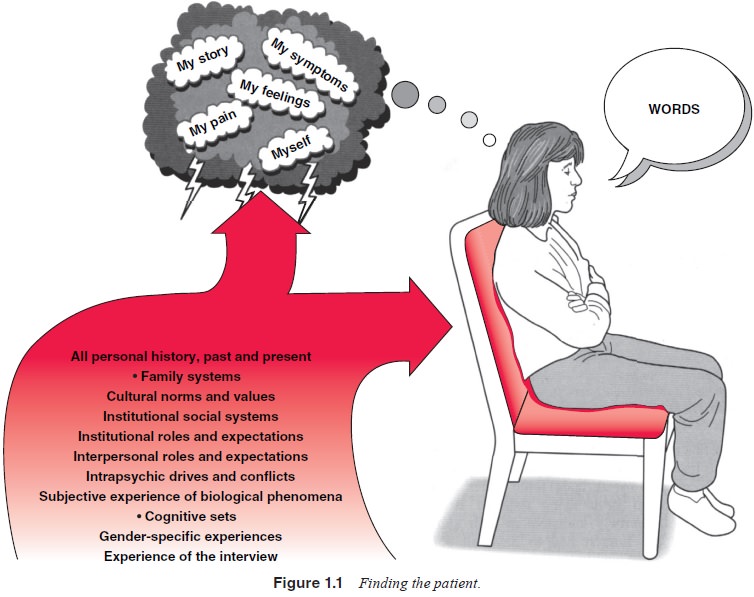 The qualitative aspects of private experience remain, to this day, a major problem in philosophy. It was the basis of Rene Descartes’ (1991) philosophical doubting that became the fun-damental intellectual underpinning of Western thought for so long. Edmund Husserl (1977) used it as the basis for an entire philosophical system, phenomenology, which was a forerunner of existentialism, which was so influential in both American and European psychiatry in the 1950s and 1960s (May et al., 1958; Binswanger, 1963).

Silvano Arieti (1967) hypothesized that cognitive devel-opment produces changes over time in the inner experience of various affects. Does a person with borderline personality disor-der experience “anxiety” in the same qualitative and quantitative manner in which a neurotic person does? What is the relationship between sadness and guilt and the empty experiences of depres-sion? This perspective underlies the principle articulated in text after text on interviewing that emphasizes the importance of es-tablishing rapport in the process of history taking. It is incredibly easy for the psychiatrist to attribute to the patient what she/he would have meant and what most people might have meant in using a particular word or phrase. The sense in the narrator that the listener is truly present, connected, and with the patient enor-mously enhances the accuracy of the story reported.

Words that have been used to describe this process of constant attention to and inference of inner experience by the listener include interest, empathy (Rogers, 1951; Kohut, 1991; Truax, 1963), attentiveness and noncontingent positive regard (Truax, 1963). However, these are words that may say less than they seem to. It is the constant curious awareness on the listener’s part, that she/he is trying to grasp the private inner experience of the patient, and the storyteller’s sense of this stance by the psy-chiatrist that impels the ever more revealing process of history taking. This quality of listening produces what we call rapport, without which psychiatric histories become spotty, superficial and even suspect. There are no bad historians, only patients who have not yet found the right listener.

In treatment, we even find empirical data to support this perspective. The two most powerful predictors of outcome in any form of psychotherapy are empathy and the therapeutic al-liance (Horvath and Luborsky, 1993; Greenson, 1978). This has been shown again and again in study after study for dynamic therapy, cognitive therapy, behavior therapy and even medica-tion management (Elkin et al., 1989). This led some researchers and theorists to propose that the power of psychotherapy can be understood solely as a remoralization phenomenon based on sup-port and empathy (Frank, 1973; Omer and London, 1989). The truth of this can be seen in the remarkable therapeutic success of the “clinical management” cell of the National Institutes of Mental Health Collaborative Study on the Treatment of Major Depression. Although the Clinical Management Cell was not as effective as the cells that included specific drugs or specific psychotherapeutic interventions, 35% of patients with moder-ate to severe major depressive disorder improved significantly with carefully structured supportive clinical management alone (Elkin et al., 1989).

Helpful psychiatric listening requires a complicated atti-tude toward control and power in the interview (see Table 1.3). The psychiatrist invites the patient/storyteller to collaborate as an active informer. He is invited, too, to question and observe him-self. This method of history taking remains the principal tool of general clinical medicine. However, as Freud pointed out, these methods of active uncovering are more complex in the psychic 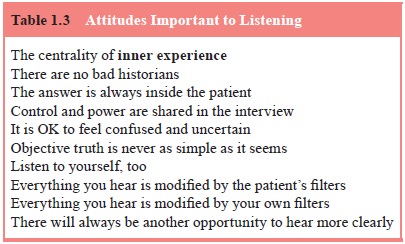 realm. The use of the patient as a voluntary reporter requires that the investigator keep in mind the unconscious and its power over the patient and listener. Can the patient be a reliable objective wit-ness of himself or his symptoms? Can the listener hold in mind his own set of filters, meanings, and distortions as he hears? The listener translates for himself and his patient the patient’s articu-lation of his experience of himself and his inner world into our definition of symptoms, syndromes, and differential diagnoses which make-up the concept of the medical model.

Objective–descriptive examiners are like detectives clos-ing in on disease. The psychiatric detective enters the inquiry with an attitude of unknowing and suspends prior opinion. The techniques of listening invoke a wondering and a wandering with the patient. Periods of head scratching and exclamations of “I’m confused”, or “I don’t understand”, or “That’s awful!” or “Tell me more”, allow the listener to follow or to point the way for the dyad. Finally, clear and precise descriptions are held up for scrutiny, with the hope that a diagnostic label or new information about the patient’s suffering and emotional pain is revealed.

It is embarking on the history taking journey together – free of judgments, opinions, criticism, or preconceived notions – that underpins rapport. Good listening requires a complex understanding of what objective truth is and how it may be found. The effective psychiatrist must eschew the traditional medical role in interviewing and tolerate a collaborative, at times me-andering, direction in which control is at best shared and some-times wholly with the patient. The psychiatrist constantly asks: What is being said? Why is it being said at this moment? What is the meaning of what is being said? In what context is all this emerging? What does that tell me about the meaning and what does it reflect about the doctor–patient relationship?