Many factors influence the ability to listen. Psychiatrists come to the patient as the product of their own life experiences.

Many factors influence the ability to listen. Psychiatrists come to the patient as the product of their own life experiences. Does the listener tune in to what he or she hears in a more attentive way if the listener and the patient share characteristics? What blocks to listening (Table 1.2) are posed by differences in sex, age, religion, socioeconomic class, race, culture, or nationality (Kleinman, 2001; Comas-Diaz and Jacobsen, 1991; Kochman, 1991)? What blind spots may be induced by superficial similari-ties in different personal meanings attributed to the same cultural symbol? Separate and apart from the differences in the develop-ment of empathy when the dyad holds in common certain fea-tures, the act of listening is inevitably influenced by similarities and differences between the psychiatrist and the patient. 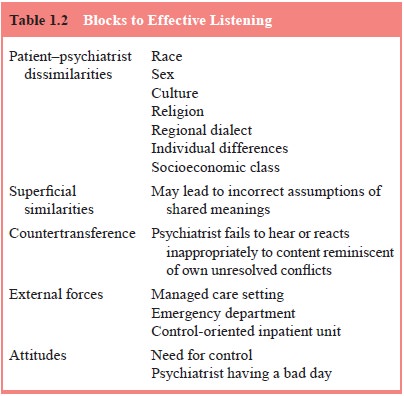 Would a woman have reported the snoring in Clinical Vi-gnette 4 or would she have been too embarrassed? Would she have reported it more readily to a woman psychiatrist? What about the image in Clinical Vignette 2 of a truck sitting on some-one’s chest? How gender and culture bound is it? Would “The Andy Griffith Show”, important in Clinical Vignette 3, have had the same impact on a young African-American boy that it did on a Caucasian one? In how many countries is “The Andy Griffith Show” even available, and in which cultures would that model of a family structure seem relevant? Suppose the psychiatrist in that vignette was not a television viewer or had come from an-other country to the USA long after the show had come and gone? (Roughly 50% of current residents in psychiatry in the USA are foreign born and trained [American Psychiatric Association, 2001].) Consider these additional examples. 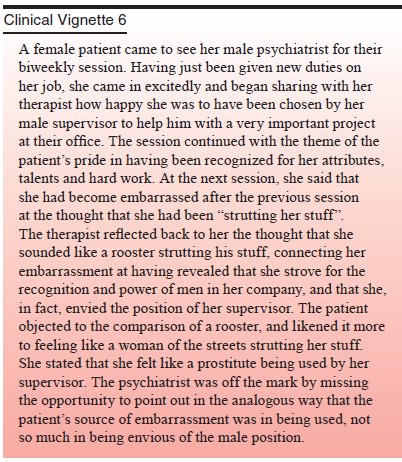 It is likely that different life experiences based on gen-der fostered this misunderstanding. How many women easilyidentify with the stereotyped role of the barnyard rooster? How many men readily identify with the role of a prostitute? These are but two examples of the myriad different meanings our specific gender may incline us towards. Although metaphor is a powerful tool in listening to the patient, cross-cultural barriers pose poten-tial blocks to understanding. 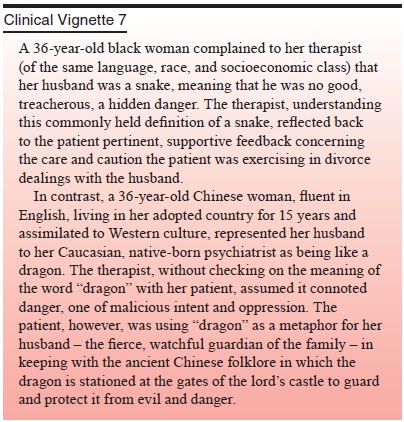 Even more subtle regional variations may produce similar problems in listening and understanding. 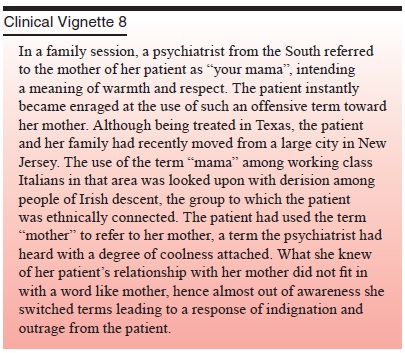 Psychiatrists discern meaning in that which they hear through filters of their own – cultural backgrounds, life expe-riences, feelings, the day’s events, their own physical sense of themselves, nationality, sex roles, religious meaning systems and intrapsychic conflicts. The filters can serve as blocks or as magnifiers if certain elements of what is being said resonate with something within the psychiatrist. When the filters block, we call it countertransference or insensitivity. When they magnify, we call it empathy or sensitivity. One may observe a theme for a long time repeated with a different tone, embellishment, inflection, or context before the idea of what is meant comes to mind. The “lit-tle fella” example in Clinical Vignette 3 illustrates a message that had been communicated in many ways and times in exactly the same language before the psychiatrist “got it”. On discovering a significant meaning that had been signaled before in many ways, the psychiatrist often has the experience, “How could I have been so stupid? It’s been staring me in the face for months!”

Managed care and the manner in which national health sys-tems are administered can alter our attitudes toward the patient and our abilities to be transforming listeners. The requirement for authorization for minimal visits, time on the phone with uti-lization review nurses attempting to justify continuing therapy, and forms tediously filled out can be blocks to listening to the patient. Limitations on the kinds and length of treatment can lull the psychiatrist into not listening in the same way or as intently. With these time limits and other “third party payer” considera-tions (i.e., need for a billable diagnostic code from the Diagnostic and Statistical Manual of Mental Disorders, Fourth Edition [DSM-IV-TR] or the International Classifi cation of Diseases, 10th Revision [ICD-10]), the psychiatrist, as careful listener, must heed the external pressures influencing the approach to the patient. Many health benefits packages will provide coverage in any therapeutic setting only for relief of symptoms, restoration of minimal function, acute problem solving, and shoring up of defenses. In various countries, health care systems have come up with a variety of constraints in their efforts to deal with the costs of care. Unless these pressures are attended to, listening will be accomplished with a different purpose in mind, more closely 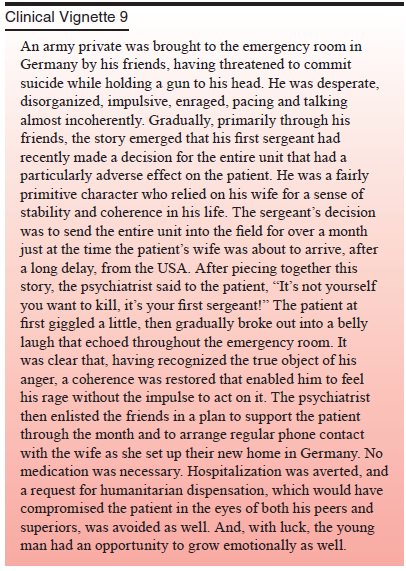 approximating the crisis intervention model of the emergency room or the medical model for either inpatient or outpatient care. In these settings, the thoughtful psychiatrist will arm himself or herself with checklists, inventories, and scales for objectifying the severity of illness and response to treatment: the ear is tuned only to measurable and observable signs of responses to therapy and biologic intervention.

With emphasis on learning here and now symptoms that can bombard the dyad with foreground static and noise, will the patient be lost in the encounter? The same approach to listen-ing occurs in the setting of the emergency department for crisis intervention. Emphasis is on symptom relief, assurance of ca-pacities to keep oneself safe, restoration of minimal function, acute problem solving and shoring up of defenses. Special atten-tion is paid to identifying particular stressors. What can be done quickly to change stressors that threw the patient’s world into a state of disequilibrium? The difference in the emergency room is that the careful listener may have 3 to 6 hours, as opposed to three to six sessions for the patient with a health maintenance organization or preferred provider contract, or other limitations on benefits. If one is fortunate and good at being an active lis-tener–bargainer, the seeds of change can be planted in the hope of allowing them time to grow between visits to the emergency department. If one could hope for another change, it would be for a decrease in the chaos in the patient’s inner world and outer world.