The antenna of the PS II reaction center contains primarily four LHCs termed LHC-IIa–d. The main component is LHC-IIb; it represents 67% of the total chlorophyll of the PS II antenna and is the most abundant membrane protein of the thylakoid membrane, and has therefore been partic-ularly thoroughly investigated. LHC-IIb occurs in the membrane, most probably as a trimer. The monomer consists of a polypeptide to which four xanthophyll molecules are bound (Table 2.2). The polypeptide contains one threonine residue, which can be phosphorylated by ATP via a protein kinase. Phosphorylation regulates the activity of LHC-II .

There has been a breakthrough in establishing the three-dimensional structure of LHC-IIb by electron cryomicroscopy at a temperature of 4 K of crystalline layers of LHC-IIb-trimers (Fig. 2.11). The LHC-IIb-peptide forms three transmembrane helices. The two lutein molecules span the membrane crosswise. The other two molecules are not visible in the iso-lated LHC complex. The chl-b-molecules, where the absorption maximum in the red spectral region lies at a shorter wavelength than that of chl-a, are positioned in the outer region of the complexes. Only one of the chl-a-molecules is positioned in the outer region; the others are all present in the center. Figure 2.12 shows a vertical projection of the arrangement of the monomers to form a trimer. The chl-a  positioned in the outer region medi-ates the transfer of energy to the neighboring trimers or to the reaction center. The trimers are arranged in the membrane as oligomers forming the antenna for the conductance of the absorbed excitons. The chl-a/chl-b ratio is much higher in LHC-IIa and LHC-IIc than in LHC-IIb. Most likely LHC-IIa and LHC-IIc are positioned between LHC-IIb and the reaction center. 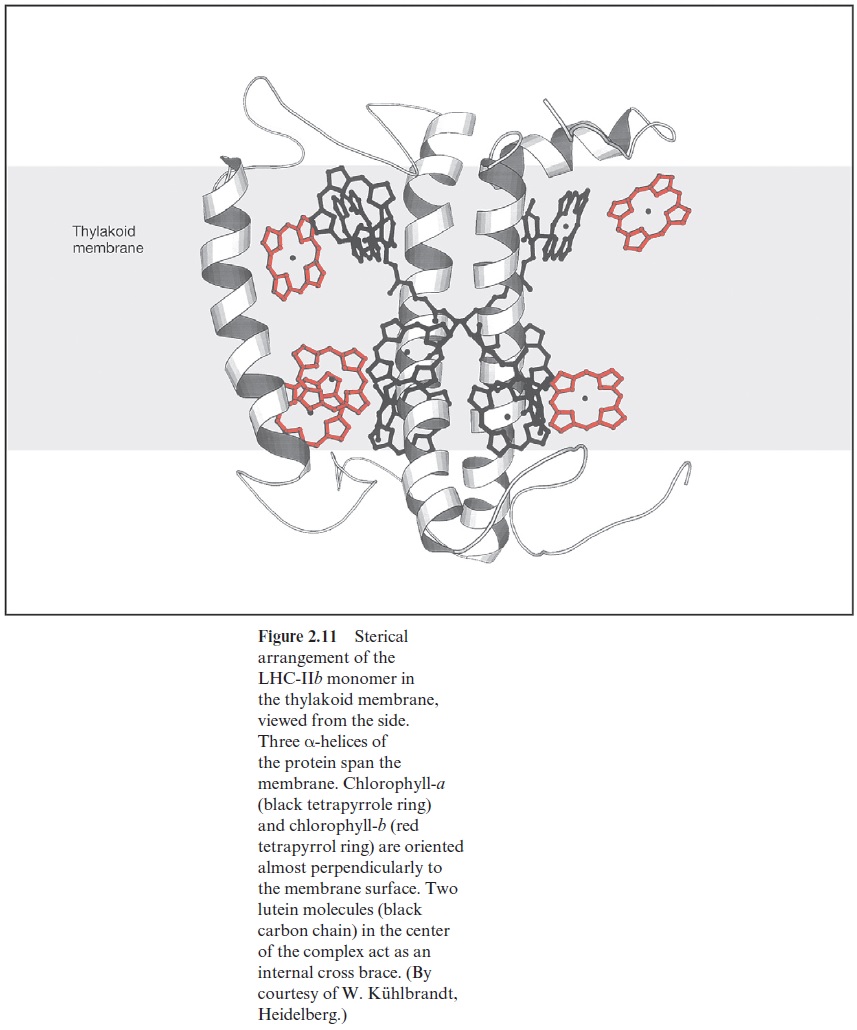 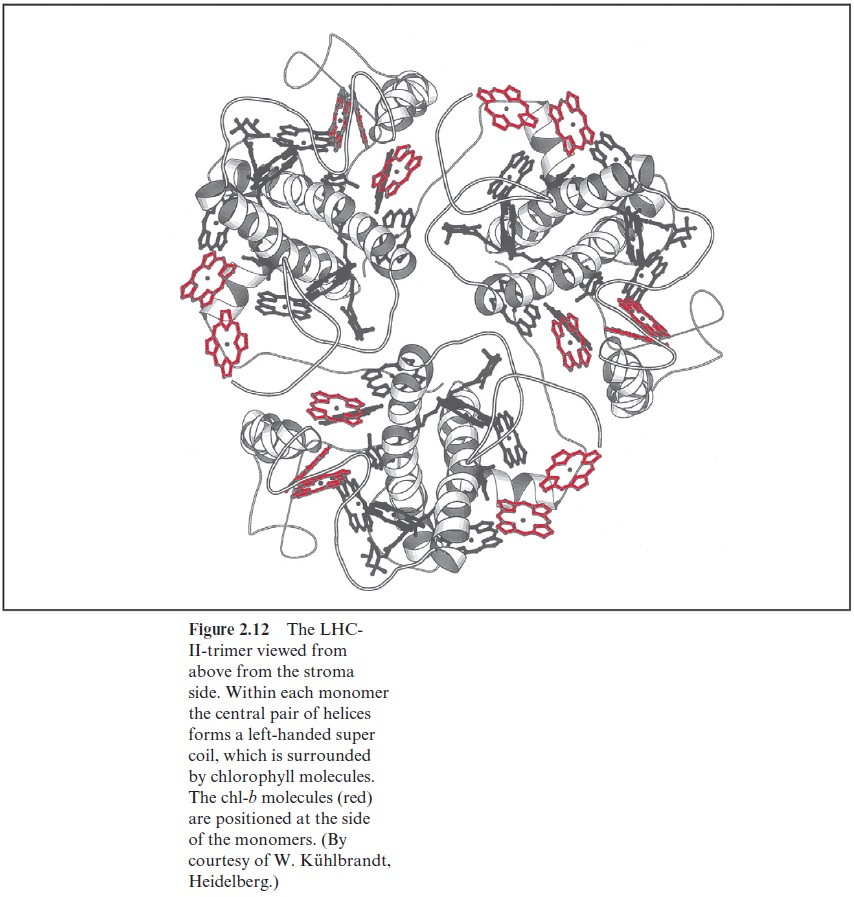 Figure 2.13 shows a hypothetical scheme of the array of the PS II antenna. The outer complexes, consisting of LHC-IIb, are present at the periphery of the antenna. The excitons captured by chl-b in LHC-IIb are transferred to chl-a in the center of the LHC-IIbmonomers and are then transferred further by chl-a contacts between the trimers to the inner anten-nae complexes. The inner complexes are connected by small chlorophyll containing subunits to the core complex. This consists of the antennae pro-teins CP 43 and CP 47, which are closely attached to the reaction center (Fig. 3.22), and each containing about 15 chl-a molecules. Since the absorp-tion maximum of chl-b is at a lower wavelength than that of chl-a, the transfer of excitons from chl-b to chl-a  is accompanied by loss of energy as heat. This promotes the flux of excitons from the periphery to the reaction center. The connection between the outer LHCs (LHC-IIb) and the PS II can be interrupted by phosphorylation. In this way the actual size of the antenna can be adjusted to the intensity of illumination . 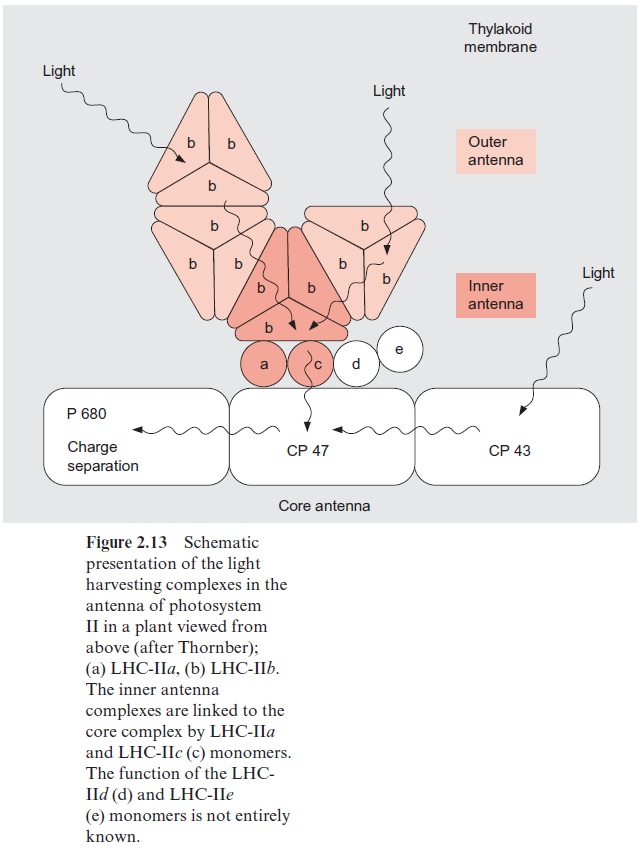 Photosystem I contains fewer LHCs than photosystem II  since its core antenna is larger than in PS II. The LHCs of PS I are similar to those of PS II. Sequence analysis shows that LHC-I and LHC-II stem from a common ancestor. It has been suggested that in the phosphorylated state LHC-IIb can also function as an antenna of PS I .

There are two mechanisms for the movement of excitons. The excitons may be delocalized by distribution over the whole chromophore mole-cules. On the other hand, excitons may also initially be present in a certain chromophore molecule and subsequently transferred to a more distant chromophore. This process of exciton transfer has been termed the Förster mechanism. The transfer of excitons between closely neighboring chlorophyll molecules within an LHC complex probably proceeds viadelocalized electrons, and the transfer between the LHCs and the reaction center occurs via the Förster mechanism. Absorption measurements with ultrafast laser technique have shown that the exciton transfer between two chlorophyll molecules proceeds within 0.1 ps (10-13 s). Thus the velocity of the exciton transfer in the antennae is much faster than the charge separation in the reaction center (approx 3.5 ps) . The reaction center functions as an energy trap for excitons present in the antenna.

Study Material, Lecturing Notes, Assignment, Reference, Wiki description explanation, brief detail
Plant Biochemistry: The use of energy from sunlight by photosynthesis is the basis of life on earth : The function of an antenna is illustrated by the antenna of photosystem II |