In photosynthesis of a green plant, light is collected primarily by chlorophylls, pigments that absorb light at a wavelength below 480 nm and between 550 and 700 nm.

In photosynthesis of a green plant, light is collected primarily by chlorophylls, pigments that absorb light at a wavelength below 480 nm and between 550 and 700 nm (Fig. 2.3). When white sunlight falls on a chlorophyll layer, the green light with a wavelength between 480 and 550 nm is not absorbed, but is reflected. This is why plant chlorophylls and whole leaves appear green. 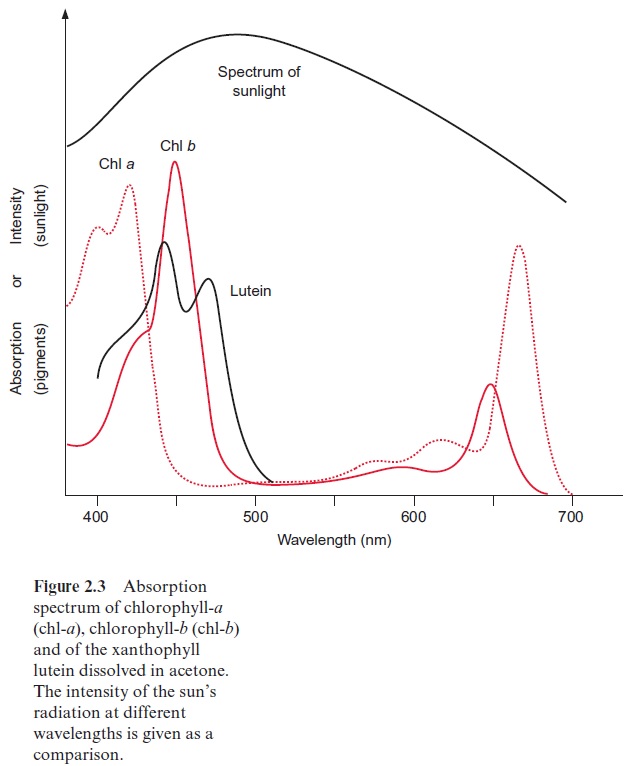 Experiments carried out between 1905 and 1913 in Zurich and Berlin by Richard Willstätter and his collaborators led to the discovery of the structural formula of the green leaf pigment chlorophyll, a milestone in the history of chemistry. This discovery made such an impact that Richard Willstätter was awarded the Nobel Prize in Chemistry as early as 1915. There are different classes of chlorophylls. Figure 2.4 shows the structural formulas of chlorophyll-a and chlorophyll-b (chl-a, chl-b). The basic struc-ture is a ring made of four pyrroles, a tetrapyrrole, which is also named porphyrin. Mg++ is present in the center of the ring as the central atom.Mg++ is covalently bound with two N atoms and coordinately bound to the other two atoms of the tetrapyrrole ring. A cyclopentanone is attached to ring c. At ring d a propionic acid group forms an ester with the alcohol phytol. Phytol consists of a long branched hydrocarbon chain with one C-C double bond. It is derived from an isoprenoid, formed from four isoprene units . This long hydrophobic hydrocarbon tail renders the chlorophyll highly soluble in lipids and therefore promotes its presence in the membrane phase. Chlorophyll always occurs bound to proteins. Chl-b contains a formyl residue in ring b instead of the methyl residue as in chl-a. This small difference has a large influence on light absorption. Figure 2.3 shows that the absorption spectra of chl-a and chl-b differ markedly. 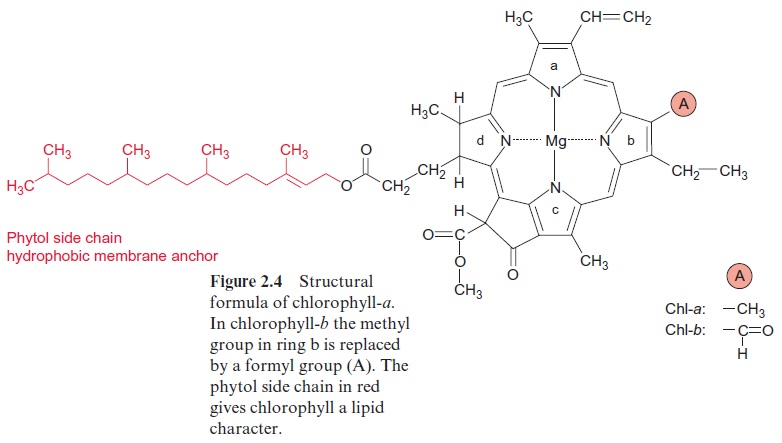 In plants, the ratio chl-a to chl-b is about three to one. Only chl-a is a constituent of the photosynthetic reaction centers and therefore it can be regarded as the central photosynthesis pigment. In a wide range of the visible spectrum, however, chl-a does not absorb light (Fig. 2.3). This non-absorbing region is named the “green window.” The absorption gap is narrowed by the light absorption of chl-b, with its first maximum at a higher wavelength than chl-a and the second maximum at a lower wavelength. The light energy absorbed by chl-b can be transferred very efficiently to chl-a. In this way, chl-b enhances the plant’s efficiency for utilizing sunlight energy.

The structure of chlorophylls has remained remarkably constant during the course of evolution. Purple bacteria, probably formed more than 3 billion years ago, contain as photosynthetic pigment a bacteriochlorophyll-a, which differs from the chl-a shown in Fig. 2.4 only by the alteration of one side chain and by the lack of one double bond. This, however, influences light absorption; both absorption maxima are shifted outwards and the non-absorbing spectral region in the middle is broadened. This shift allows purple bacteria to utilize light in the infrared region.

It seems remarkable that a substance that attained a certain function during evolution is being utilized after only minor changes for completely different functions. The reason for this functional variability is that the reactivity of compounds such as chlorophyll or heme is governed to a great extent by the proteins to which they are bound.

Chlorophyll molecules are bound to chlorophyll-binding proteins. In a complex with proteins the absorption spectrum of the bound chlorophyll differs considerably from the absorption spectrum of the free chlorophyll. The same applies for other light-absorbing compounds, such as carotenoids, xanthophylls, and phycobilins, which also occur bound to proteins. These complexes will be discussed in the following sections. For better discrimi-nation in this text book, free absorbing compounds are called chromophore(Greek, carrier of color) and the chromophore-protein complexes are called pigments. Pigments are further characterized by the wavelength of their absorption maximum. Chlorophyll-a700 describes a pigment of protein-chl-a complex with an absorption maximum of 700 nm. Another common desig-nation is P700; this nomination leaves the nature of the chromophore open.

Study Material, Lecturing Notes, Assignment, Reference, Wiki description explanation, brief detail
Plant Biochemistry: The use of energy from sunlight by photosynthesis is the basis of life on earth : Chlorophyll is the main photosynthetic pigment |