What happens when a chromophore absorbs a photon? When a photon with a certain wavelength hits a chromophore molecule that absorbs light of this wavelength, the energy of the photon excites electrons and trans-fers them to a higher energy level.

After absorption of energy, an electron of the conjugated system is ele-vated to a higher orbit. This excitation state is termed singlet.Figure 2.6 shows a scheme of the excitation process. As a rule, the higher the number of double bonds in the conjugated system, the lower the amount of energy required to produce a first singlet state. For the excitation of chlorophyll, dark red light is sufficient, whereas butadiene, with only two conjugated double bonds, requires energy-rich ultraviolet light for excitation. The light absorption of the conjugated system of the tetrapyrrole ring is influenced by the side chains. Thus, the differences in the absorption maxima of chl-a and chl-b mentioned previously can be explained by an electron attracting effect of the carbonyl side chain in ring b of chl-b(Fig. 2.5). 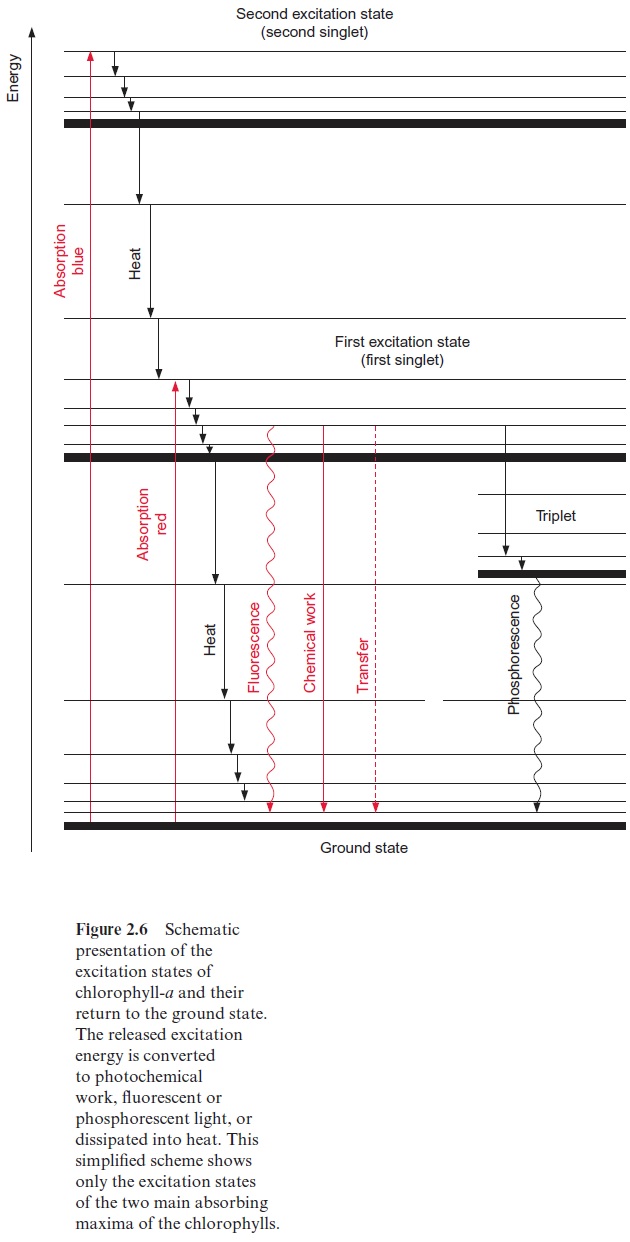 The spectra of chl-a and chl-b (Fig. 2.3) each have two main absorption maxima, showing that each chlorophyll has two main excitation states. In addition, chlorophylls have minor absorption maxima, which for the sake of simplicity will not be discussed here. The two main excitation states of chlo-rophyll are known as the first and second singlet (Fig. 2.6). The absorption maxima in the spectra are relatively broad. At a higher resolution the spec-tra can be shown to consist of many separate absorption lines. This fine structure of the absorption spectra is due to chlorophyll molecules that are in the ground and in the singlet states as well in rotationand vibration. In the energy scheme the various rotation and vibration energy levels are drawn as fine lines and the corresponding ground states as solid lines (Fig. 2.6).

The return of the chlorophyll molecule from the first singlet state to the ground state can proceed in different ways:

1.  The most important path for the conversion of the energy released upon the return of the first singlet state to the ground state is its utiliza-tion for chemical work. The chlorophyll molecule transfers the excited electron from the first singlet state to an electron acceptor and a pos-the excited electron is bound less strongly to the chromophore molecule than in the ground state. When the chlorophyll molecule returns to the ground state, the free energy derived from this process is conserved for chemical work. As an alternative, the electron deficit in the chl+. radical  may be replenished by another electron donor (e.g., water).

2.  The excited chlorophyll can return to the ground state by releasing exci-tation energy as light; this emitted light is namedfluorescence. Due to vibrations and rotations, part of the excitation energy is usually lost as heat, with the result that the fluorescence light has less energy (corre-sponding to a longer wavelength) than the energy of the excitation light, which was required for attaining the first singlet state (Fig. 2.7). 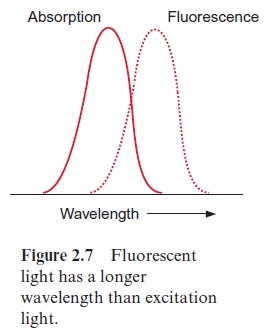 3.  It is also possible that the return from the first singlet to the ground state proceeds in a stepwise fashion via the various levels of vibration and rotation energy, by which the energy difference is completely con-verted into heat.

5.  The return to the ground state can be coupled with the excitation of a neighboring chromophore molecule.