Recognition of peptide epitopes presented by MHC molecules on cell surfaces. Thisis followed by activation and clonal expansion of T cells in the case of epitopes asso- ciated with class II MHC molecules.

The major roles of T cells in the immune response are:

1.     Recognition of peptide epitopes presented by MHC molecules on cell surfaces. Thisis followed by activation and clonal expansion of T cells in the case of epitopes asso- ciated with class II MHC molecules.

2.     Production of lymphokines that act as intercellular signals and mediate the activation and modulation of various aspects of the immune response and of nonspecific host de- fenses.

There are two major types of T-cell receptors in humans. More than 90% of T cells in adult spleen, lymph nodes, and peripheral blood express the   α/β   receptor, which is de picted in Figure 8 – 3. A small subset (usually 5%) of T cells express the  γ/δ  receptor. The γ/δ   receptor is more prevalent on fetal T cells, has a limited capacity for diversity, and shows an association with responses to mycobacterial infections. Both the   α/β   and  γ/δ  T- cell receptors occur in association with the CD3 complex, a set of at least five distinct proteins that is necessary for signal transduction and allows activation of the T cells fol- lowing recognition of antigen. 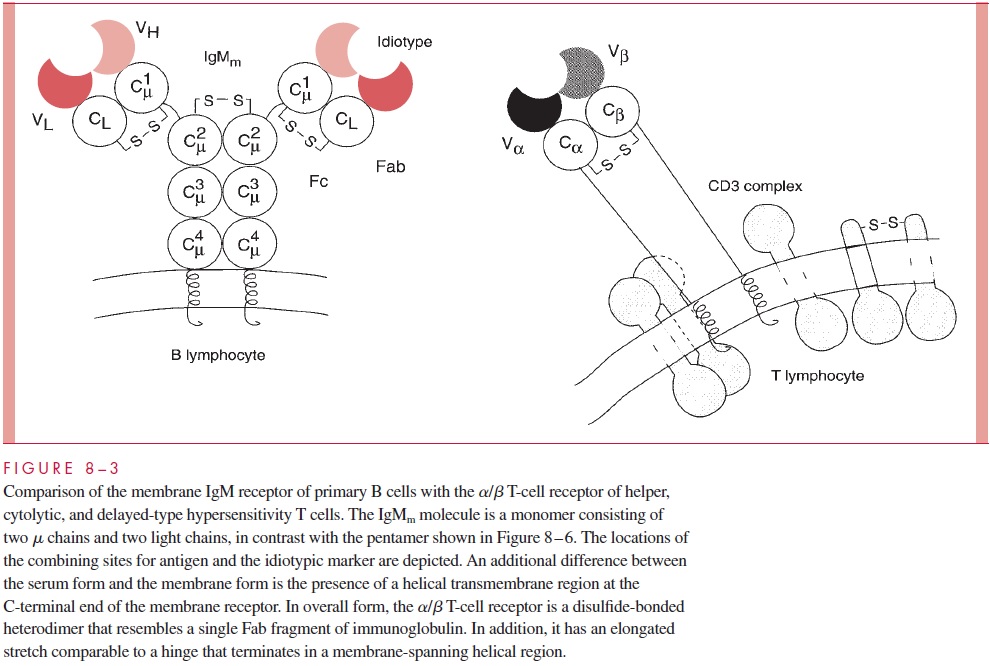 A particular set of cell surface proteins specified by the genes of the MHC plays a major role in the recognition of antigens by T cells. These were first discovered through transplantation experiments, where it was found that they were major markers recognized in graft rejection. Subsequently, a strong association between susceptibility to disease and particular MHC markers was found. The MHC contains sets of genes that are designated as class I and class II determinants. These loci are highly polymorphic, and within popu-lations, association with particular MHC markers correlates with the capacity to respond to particular antigens. Recent studies have shown that peptide determinants produced byproteolytic degradation of proteins by antigen-presenting accessory cells bind to MHC products, which then present the peptide antigen to the   α/β   T-cell receptor. Human class I molecules (HLA-A, HLA-B, and HLA-C) are expressed on virtually all cells of the body, whereas class II molecules (HLA-DR) are restricted to lymphocytes and macrophages,including important antigen-presenting cells such as dendritic cells.

Cytotoxic T cells recognize antigen on MHC class I molecules and express the CD8 marker. By contrast, cells bearing the γ/δ antigen-specific T-cell receptor (Tcr) lack both CD4 and CD8. Figure 8 – 3 shows a membrane form of antibody expressed on B cells as a comparison with the γ/δantigen-specific receptor of T cells. α/β T-cell receptors have not been found to any degree in serum and exist predominantly as cell surface recognition molecules. The affinity of T-cell receptors for antigen is low, and the role of MHC presentation of antigen is most probably to compensate for the low affinity.

Specific T-cell help is initiated by the binding of α/β Tcr to antigen presented by MHC class II molecules. Most of the details of antigen presentation have been estab-lished using protein antigens, with an emphasis on virally infected cells so that the gen-eral principles apply to specific cytolytic cells as well. These proteins are digested into peptides by phagocytic cells (sometimes referred to as accessory cells), with certain pep-tides bound in a peptide-binding cleft within the MHC molecules intracellularly. These peptide – MHC complexes are then expressed on the cell surface, where the peptide epi-tope can be presented to the low-affinity antigen combining site of the α/β Tcr on T cells of compatible MHC type.

The initial specificity of cytotoxic T cells is, likewise, impacted by the  α/β Tcr, but the MHC restriction involves class I molecules. In humans, the vast majority of circulat-ing T cells bear the α/β Tcr. The CD3 surface marker comprises at least five distinct pro-teins involved in forming a membrane activation complex in association with the Tcr. The γ/δ Tcr is the first to appear in fetal development, but it constitutes less than 5% of T cells in the adult. Like the α/β Tcr, it occurs in association with CD3. γ/δ Tcr-bearing T cells are cytotoxic but do not show MHC restriction.

Other cellular phenomena can be nonspecific in the sense that neither antigen-specific antibodies nor T-cell receptors are involved. These include natural killer (NK) cells and armed or activated macrophages such as mast cells, basophils and eosinophils, and macrophages. Activated macrophages produce substances toxic to intracellular pathogens, including reactive nitrogen and oxygen intermediates that can kill the organisms. NK cells are cells related to lymphocytes that are present in the absence of antigenic stimulation that recognize and kill particular types of turnor cells. NK cells recognize MHC class I through inhibitory receptors and lyse cells such as tumors that lack the MHC markers. Two major types of NK cells have been described: NK cells and NKT cells. The first type are usually large and granular and kill certain tumors and also function in innate immunity to viruses and intracellular pathogens. NKT cells express the α/β Tcr but with only one V gene product, have T-cell markers, and are secreted by TH1 (interferon- γ, or IFN-γ ) and TH2-type (interleukin-4, or IL-4) cytokines.

Antigen-specific sensitized killer cells are induced by specific sensitization with the target antigen. The cytotoxic T cells are activated by the presence of processed antigen and cytokines by a MHC-compatible antigen-presenting cell and show a subsequent MHC restriction in their capacity to destroy target cells. Cytotoxic T cells use the α/β T-cell receptor in recognition of peptide I MHC antigens. Cells with delayed-type hyper-sensitivity also are antigen-specific T cells that can be generated in the absence of circu-lating antibodies. An example of delayed-type hypersensitivity is skin sensitization with small organic molecules, such as the quinone produced by poison ivy.

Helper T cells (TH cells) are stimulated by antigen in the context of MHC class II presen-tation and are further marked by the presence of the CD4 cell surface antigen. If T cells are of the proper MHC background to recognize the antigen specifically, T-cell activation occurs in the presence of IL-1. The antigen – MHC complex presented to a specific T cell by the macrophage is the specific signal that induces the T cell to become activated and divide. The secretion of IL-2, following stimulation by IL-1, promotes the division of T cells following contact with antigens. The activated TH cell presents both antigen and reg-ulatory cytokines to the B cells, orchestrating the scheme of B cell differentiation from small lymphocytes to plasma cells producing antibodies of various types. The ability of particular B cells or T cells to respond to stimulation by individual cytokines is dependent on the presence of surface receptors for those cytokines.

Table 8 – 2 outlines the biological properties of some characterized cytokines. Cy-tokines can be involved in general physiologic or aphysiologic processes such as the induction of fever, mitogenesis or division of lymphocytes, and the stimulation of phago-cytic cells. Other cytokines are involved in regulating activation of specific subsets of lymphocytes, and some have an extremely specific function in regulating the im-munoglobulin isotypes expressed. The immune response is a complex but precisely regu-lated defense system in which specific recognition is imparted by antibodies, B-cell immunoglobulin receptors, and T-cell receptors, and activation and differentiation are de-pendent on a regulatory cascade of cell – cell communication molecules. The functional roles of cytokines produced by subsets of CD4 helper cells; TH1 and TH2, are essential for the discrimination between antibody formation (TH2) and inflammatory cell-mediated immunity (TH1) and, consequently, for the severity of autoimmune disease (TH1), the ca-pacity to reject tumors (TH1), the immune resistance to viruses and intracellular parasites (TH1), the resistance to helminth worms (TH2), the susceptibility to viruses and intracellu-lar parasites (TH2), and susceptibility to allergic disorders (TH2).

The critical significance of CD4 helper cells to the body is shown by the cata-strophic effects of acquired immunodeficiency syndrome (AIDS), in which the human immunodeficiency virus (HIV) binds to the CD4 molecule, enters the cell, and inter-feres with its function or destroys it. As a result, the body becomes susceptible to a wide variety of bacterial, viral, protozoal, and fungal infections, both through loss of preex-isting immunity and through failure to mount an effective immune response to newly acquired pathogens.

CD8+ cytotoxic T lymphocytes are a second class of effector T cells. They are lethal to cells expressing the epitope against which they are directed when the epitope is in con-junction with class I MHC molecules. They too have specific epitope recognition sites, but they are characterized by the CD8+ cell surface marker; thus, they are referred to as CD8 cytotoxic T cells. These cells recognize the association of antigenic epitopes with class I MHC molecules on a wide variety of cells of the body. However, this recognition does not itself lead to the necessary clonal expansion of CD8 cells, which also requires the lymphokine IL-2 to be produced by activated CD4 lymphocytes. In the case of virally infected cells, cytotoxic CD8+ cells prevent viral production and release by elimi-nating the host cell before viral synthesis or assembly is complete.

Suppressor T lymphocytes also carrying the CD8 marker and epitope recognition sites are involved in modulating and terminating the immunologic activities of both T and B cells, thus avoiding excessive or needlessly prolonged responses that could interfere with other immunologic activities. It is known that the suppression they produce may be antigen specific or it may be polyclonal (ie, affecting general immunologic responses ir-respective of the inciting antigen). The mechanisms of suppression and control are less well defined than are the activities of CD4+ helper cells. In AIDS, the proportion of CD8+ suppressor cells relative to CD4 helper T cells is substantially increased, be-cause CD8+ lymphocytes are not attacked by HIV. This imbalance, in addition to the depletion of CD4+ helper cells, may contribute to the immunosuppression that is char-acteristic of the disease.

A group of antigens have been termed superantigens because they stimulate a much larger number of T cells than would be predicted based on the generation of combining site diversity through clonal selection. Superantigens activate 3 to 30% of T cells in un-stimulated animals. The action of superantigens is based on their ability to bind directly to MHC proteins and to particular Vβ regions of the T-cell receptor (see Fig 8 – 3) without involving the antigen combining site. Individual superantigens recognize exposed por-tions defined by framework residues that are common to the structure of one or more Vβ regions. Any T cells bearing those Vβ sites may be directly stimulated. A variety of mi-crobial products have been identified as superantigens. An example in which the pyro-genic exotoxins of Staphylococcus aureus and group A streptococci act as superantigens istoxic shock syndrome.