Antibodies - B Cells and Antibody Responses

Antibodies belong to the immunoglobulin family of proteins, which occur in quantity in serum and on the surfaces of B cells.

Antibodies belong to the immunoglobulin family of proteins, which occur in quantity in serum and on the surfaces of B cells. The basic structure of an immunoglobulin is illustrated in Figure 8 – 5, which depicts an IgG molecule. Immunoglobulins have a basic tetrameric structure consisting of two light polypeptide chains and two heavy chains usually associated as light/heavy pairs by disulfide bonds. 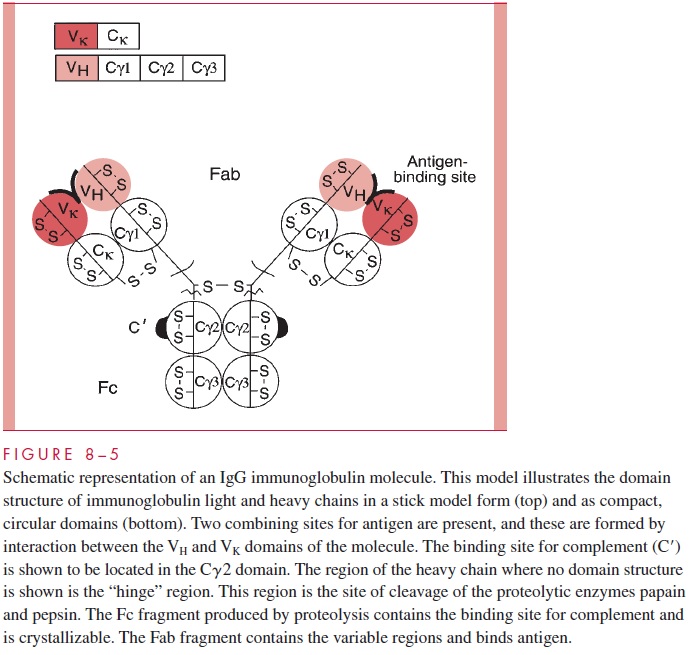 The two light/heavy pairs are covalently associated by disulfide bonds to form the tetramer. There are two types of light chains, k chains and l chains, which are the products of distinct genetic loci. The class or isotype of the im-munoglobulin is defined by the type of heavy chain expressed. In this IgG molecule, the heavy chains are termed γ chains and have characteristic sequences and antigenic markers. IgG immunoglobulins can have either k or l chains associated with the γ, but only one type of light chain would be present in the intact molecule. That is, an individual IgG molecule would be either γ2k2, or γ 2l2; mixed molecules do not occur. This diagram illustrates other basic structural features of the molecule. The basic building block of immunoglobu-lins is a domain of approximately 110 amino acids containing an internal disulfide bond stabilizing the structure. Domains are compact, tightly folded structures having a character-istic “immunoglobulin fold.” The light chains contain two domains: a variable domain and a constant domain. The γ heavy chain contains four domains: VH, C γ 1, C γ 2, and C γ 3.

Antibodies carry out two broad sets of functions: the recognition function is the prop-erty of the combining site for antigen, and the effector functions are mediated by the constant regions of the heavy chains. Antibodies combine with foreign antigens, but the actual destruction or removal of antigen requires the interaction of portions of the Fc fragment with other molecules such as complement components or with effector cells, which then engulf the recognized cell or particle.

The combining site for antigen (antigen binding site) is formed by interaction of the variable domains of the heavy chain and the light chain. The IgG molecule has two suchcombining sites. Immunoglobulin in the serum of normal individuals occurs as a large pool of individual molecules, each of which has a unique sequence and a defined combining site.

The defined combining site of an immunoglobulin has been termed an idiotype. The idiotype is a combining site-related antigenic marker that defines individual immunoglobu-lins. Other types of antigenic markers of immunoglobulins define classes or isotypes. These occur on the constant regions of light chains, where they define the k and l iso-types. Heavy chains have CH markers identifying μ, γ, δ, α and e isotypes. These markers are found in all normal individuals. The third general type of immunoglobulin antigenic determinant is termed allotypic. These markers may be found on the light chains (eg, the KM determinant of human k chains) or heavy chains (eg, the GM markers of human IgG) and define genetic markers that behave as Mendelian alleles in the human population. Allotypic markers are usually associated with constant regions but have been reported for the variable domains of heavy chains as well.

Another structural feature of immunoglobulins that merits consideration is the fact that proteolytic digestion of the IgG molecule by the enzyme papain can cleave the structure into two defined regions. As illustrated in Figure 8 – 5, two antigen-binding or Fabfragments are generated, and a single constant or Fc fragment is produced. The cleavage occurs in the so-called hinge region, which is a relatively loose stretch of polypeptide connecting the Fab domains to the Cγ2 domain. The tight domain structures themselves are relatively resistant to proteolysis. The positions of the intradomain disulfides are indi-cated (S-S bonds). The intrachain disulfide bonds connecting the Ck and Cγ1 are also indicated, as is the location of the S-S bonds linking the two heavy chains. This basic struc-ture, although using different heavy chains, occurs in all five of the major human im-munoglobulin classes, but the number of subunits and the overall arrangement can vary. For example, Figure 8 – 6 gives a schematic representation of a serum IgM immunoglobulin. This molecule, which was originally called immune macroglobulin because of its large size (approximate mass of 900,000 daltons), consists of five subunits of the form of the typical IgG. The light chains can be either k or l, but the type of heavy chain defining the IgM class is termed the μ chain. 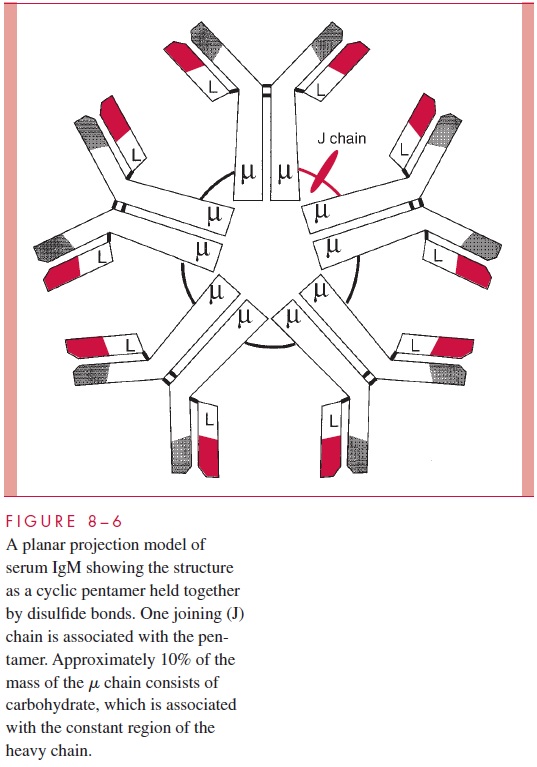 The molecule occurs as a cyclic pentamer, and a J or joining chain is also associated with the intact structure. When IgM is present on B cells where it serves as a primary receptor for antigen, it is present as a monomer. Other immunoglobulins showing a difference in arrangement from the typical IgG model are the IgA immunoglobu-lins. In serum these can occur as a monomer, but they can also occur in dimers where the joining chain is required to stabilize the dimer. IgA molecules present in the gut (secretory IgA) occur as dimers where both the J chain and an additional polypeptide, termed the se-cretory component, are present in the complex.