The intellectual framework for understanding the mechanisms of immunologic specificity was laid down by the theory of clonal selection.

The intellectual framework for understanding the mechanisms of immunologic specificity was laid down by the theory of clonal selection. It is now generally accepted that human lymphocyte populations, both B and T cells, show a great heterogeneity inasmuch as different cells possess surface receptors, which differ from each other with respect to combining site. This is shown in Figure 8 – 2 for B cells. In the actual process, great het-erogeneity in the immune response even to particular antigens is observed. Particular do-mains termed hypervariable regions provide the actual amino acid residues that confer individual specificity. In the role of B cells in antibody production, there would be a dif-ferentiation from the lymphocytes to the plasma cells, and shifts of types of antibody would occur, depending on secondary stimulation and regulatory cytokines. 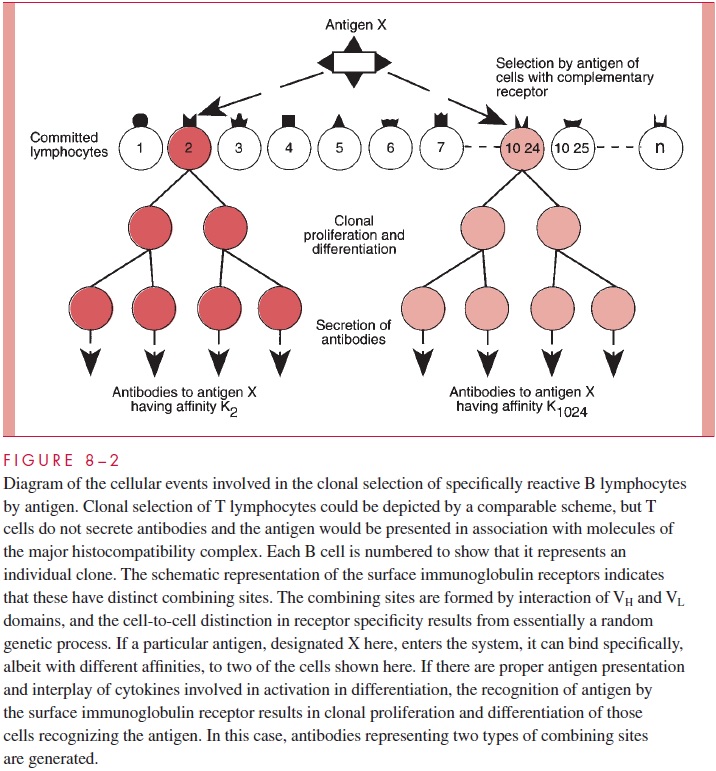 With the elimination of antigen, the majority of the clone of immunoreactive lympho-cytes is lost over time by normal cell replacement. However, the speed with which antigen is lost is very variable and depends on such factors as excretion and enzymatic breakdown. Some polysaccharide antigens and bacterial cell wall peptidoglycans are so resistant to host enzymatic breakdown that they can persist for years, whereas many protein antigens are rapidly metabolized.

Fortunately, the immune system has a recall ability in the case of protein antigens, because certain cells in the clone, termed memory cells, survive long periods and probably slowly replicate to maintain a core population with the capacity to expand very rapidly if the antigen (or the same epitope on another antigen) is encountered again.

Memory cells may be either T or B cells and are probably variants within the original clone having recognition sites with higher specific affinity for the relevant antigenic de- terminant and, thus, greater immunologic efficiency. As a consequence, the response to a second encounter with an antigen is more rapid than the first and quantitatively greater in its effect. It is referred to as a secondary response, in contrast to the initial primary re- sponse. Memory cells and the secondary response phenomenon account for the prolonged or lifelong immunity that follows many infections (eg, measles), and the secondary re- sponse is exploited in scheduling doses of various vaccines to obtain the maximum and most long-lived immunity.