B Cells and Antibody Responses

B lymphocytes are the cells responsible for antibody responses. They develop from precur-sor cells in the yolk sac and fetal liver before birth and thereafter in the bone marrow be-fore migrating to other lymphoid tissues.

B CELLS AND ANTIBODY RESPONSES

B lymphocytes are the cells responsible for antibody responses. They develop from precur-sor cells in the yolk sac and fetal liver before birth and thereafter in the bone marrow be-fore migrating to other lymphoid tissues. Each mature cell of this series carries a specific epitope recognition site on its surface — the antigen-recognizing (variable) region of anti-body that will be produced subsequently by its progeny. In the process of antibody forma-tion, B lymphocytes, following stimulation by antigen, divide and differentiate into plasma cells, which are end cells adapted for secretion of large amounts of antibodies. In addition to their essential role in antibody production, B cells can present antigen to T cells.

There are two broad types of antigens. T-independent antigens are those that do not re-quire help by T cells to stimulate B-cell antibody production, and T-dependent antigens are those that are dependent on collaboration between helper T cells and B cells to initiate the process of antibody production. T-independent antigens are generally limited to large poly-meric molecules such as carbohydrates with repeating sugar epitopes. Antibodies are particu-larly effective and essential to the protective immune response to the polysaccharide capsule of Streptococcus pneumoniae, because these bacteria would not otherwise be bound and ingested by phagocytes. Killing of the bacteria is initiated by the specific binding of antibod-ies to the surface polysaccharides, and it is carried out by either the binding of complement to the antibody on the bacterial surface or by the binding of Fc receptors on phagocytic cells to the bound antibody, thus facilitating ingestion and intracellular killing. Immunologic reactiv-ity to such polysaccharides usually develops much more slowly after birth than do the T-dependent responses, and memory cells do not result from the clonal B-cell expansion. This delay in responsiveness probably contributes to the increased susceptibility to some bacterial infections in early life. Most common antigens, particularly proteins, require T-cell help by CD4+ cells for antibody production to occur. Following stimulation by antigen processed and presented by macrophages, T cells can become helper cells collaborating with B cells, antigen-specific cytotoxic T cells capable of killing tumor cells, suppressor T cells downregu-lating the immune system, or T cells mediating delayed-type hypersensitivity. Table 8 – 1 lists major cells in the immune response and their antigen-specific and nonspecific functions. 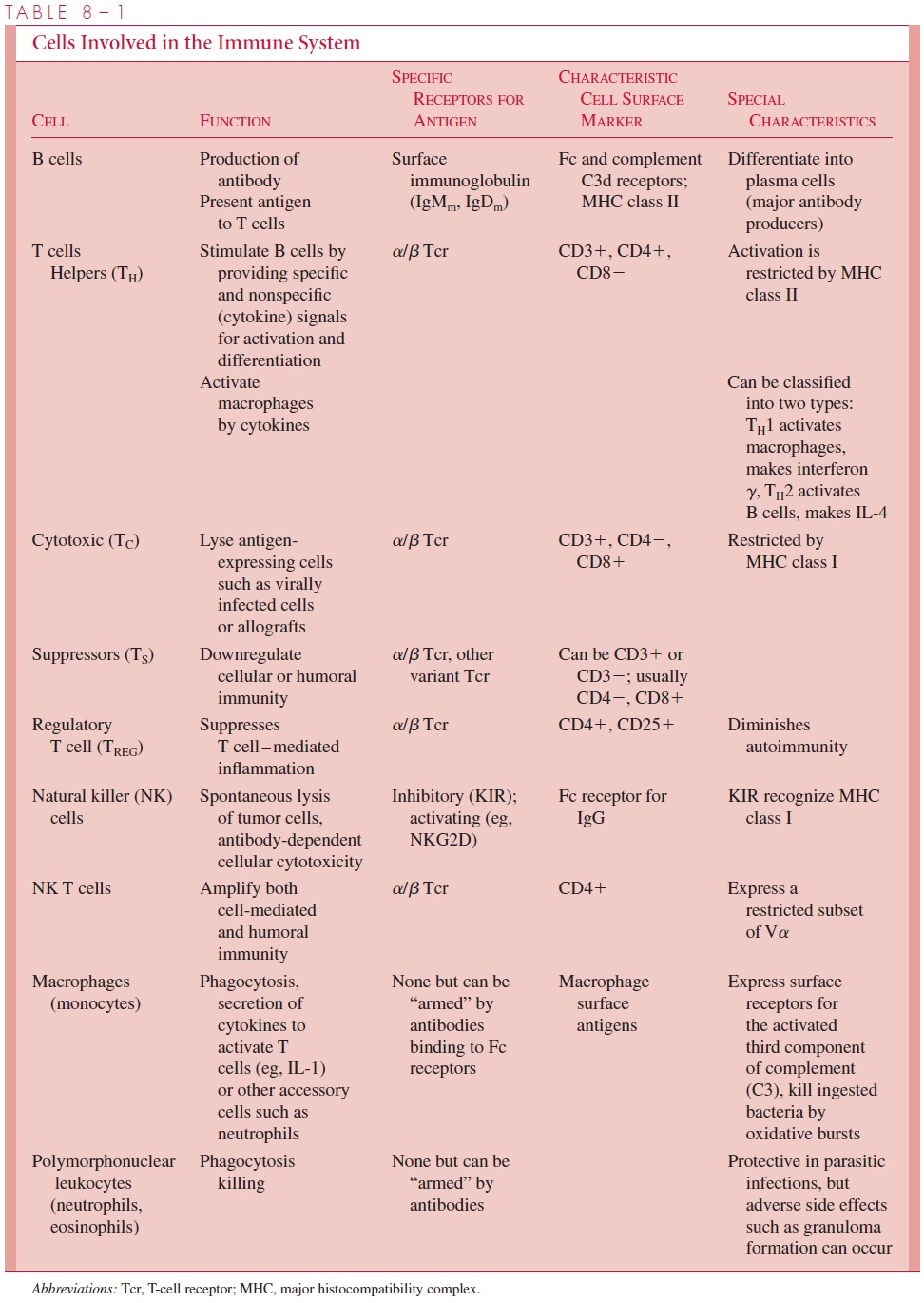 Following challenge with foreign antigen, there is a lag period of 4 to 6 days before antibody can be detected in serum. This period reflects the events involved in the recogni-tion of the antigen, its processing, and the specific activation of the cells of the immune system. The first event is the clearance of antigen from the circulation by what is essen-tially a metabolic process in which the antigen is recognized in a nonspecific sense and ingested. The vast preponderance of antigen ends up in circulating phagocytes or in sta-tionary macrophages such as the Kupffer cells in the liver. The macrophages process the antigen so that immunogenic moieties can be presented to T cells (Fig 8 – 4). IL-4, IL-5, and IL-6, in addition to specific presentation of antigen, cause the B cells to produce im-munoglobulins and also are involved in class switches. The antibody-forming system is a learning system that responds to challenge by foreign molecules by producing large amounts of specific antibody. In addition, the affinity of its binding to the specifically rec-ognized antigen often increases with time or secondary challenge. 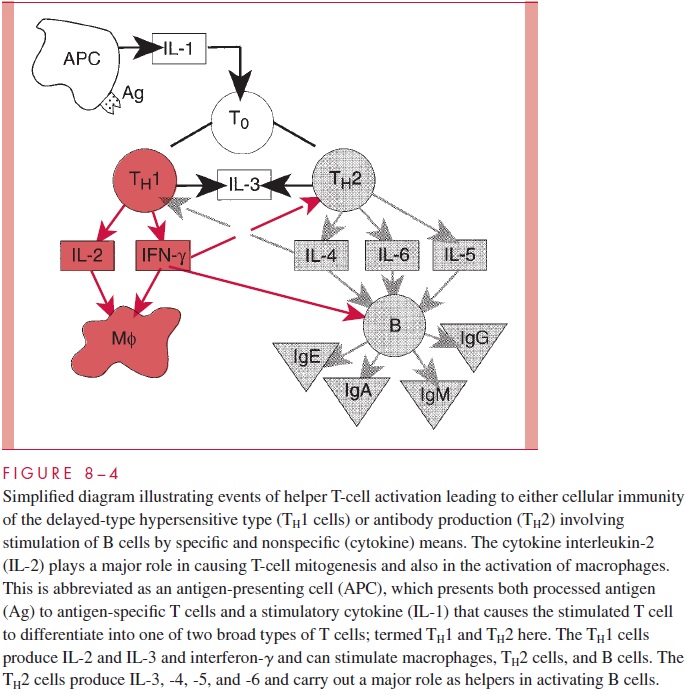