The complement system plays a critical adjunctive role to the specific immune system. Complement consists of 20 major distinct components and several other precursors.

The complement system plays a critical adjunctive role to the specific immune system. Complement consists of 20 major distinct components and several other precursors. When the complement system is triggered, a cascade of re-actions occurs that activates the different components in a fixed sequence. Several of these activated components have differing and important effects in defense against infec-tion. Components of complement are designated by numbers, which, unfortunately for the student, reflect the order in which they were first described rather than the sequence in which they are activated. There is no immunologic specificity in complement activation or in its effects, although specific antigen – antibody reactions are major initiators of acti-vation, and some complement components enhance the effects of antigen – antibody inter-actions, for instance, in opsonization.

The classic complement pathway is summarized in Figure 8 – 9. It is initiated by antigen – antibody reactions involving IgM or IgG. These reactions expose specific sites on the Fc portion of immunoglobulin molecules that bind and activate the C1 component of complement. C1 then activates C4 and C2, and this complex splits C3 into two compo-nents, C3a and C3b. C3a liberates histamine and other vasoactive mediators from mast cells and stimulates the respiratory burst of phagocytes, thus increasing their microbicidal power. C3b binds to the membrane of microorganisms or to such cells as tumor cells or red cells and to specific sites on Fc portions of IgM and IgG. Polymorphonuclear neu-trophils (PMNs) and macrophages have receptors for C3b, which thus serves as an opsonin for microorganisms. The opsonic process is markedly enhanced when specific antibody has reacted with the organism. 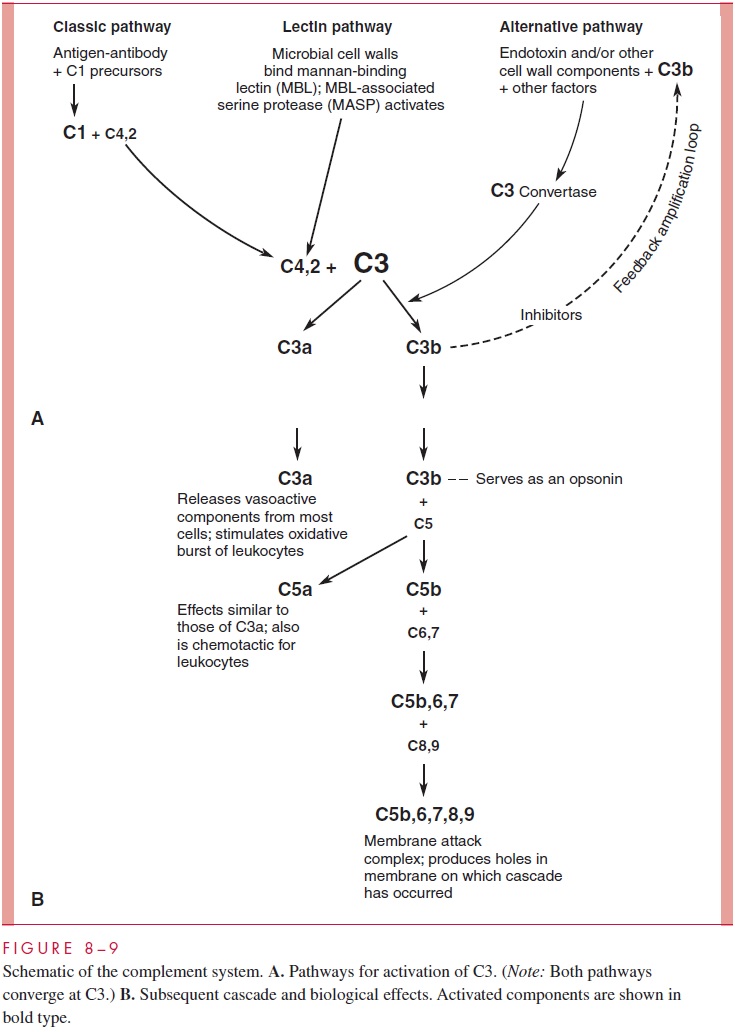 C3b, in association with activated C4 and C2, continues the cascade by splitting C5 into two components, C5a and C5b. C5a stimulates release of histamine and other vasoactive me-diators from mast cells, is a chemotactic factor for PMNs, and enhances their metabolic antimicrobial activity. C5b binds to the membrane of cells on which an antigen – antibody reaction has occurred and initiates activation of the terminal components C6 to C9. Insertion of the complex C5b, C6, C7, C8, C9 into the cell membrane produces functional holes and leads to the osmotic lysis of eukaryotic cells against which the antibody was directed. Some Gram-negative bacteria are similarly affected when there is an antibody response to accessi-ble sites on the outer membrane. In this case, lysis (bacteriolysis) requires also the activity of lysozyme from phagocytes to break down the peptidoglycan layer of the cell wall.

It produces the same inflammatory mediators (C3a, C5a) and increased phagocytic activity that result from activation of the classic pathway, but it is not as efficient in cell lysis, because direction of complement components to the cell mem-brane by antibody is not involved. This pathway is particularly important in early response to infection. Another non – antibody-mediated means of activating the complement system is based on the building of the mannose-binding lectin to pathogens via their carbohydrate-rich external surfaces and activation of serine esterases that act at the level of C4 in the cascade. Inherited deficiencies in complement components are often associated with in-creased susceptibility to bacterial infections. Most noticeable is the association of recurrent or unusually severe infections due to Neisseria  and individual comple-ment component deficiencies (usually of C5, C6, C7, or C8).